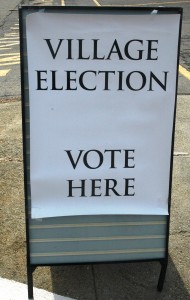 Nearly two-thirds of Cold Spring’s eligible voters cast ballots in last week’s election, a showing that topped previous village voting levels as well as those for recent state and federal elections. Nelsonville’s election generated less interest with 128 of registered 374 voters, or 34 percent, casting ballots.
In Cold Spring, 921 persons, or 64 percent of the 1,435 eligible voters, participated in the March 15 election, in which current Mayor Seth Gallagher won another two-year term, defeating former Mayor Anthony Phillips, 547 to 371. Incumbent Trustees Bruce Campbell and Ralph Falloon claimed new two-year terms as well, with totals of 649 and 631 votes, respectively, defeating Catharine J. Square, who got 361 votes. According to Village Clerk Mary Saari, who oversees Cold Spring elections, 885 residents voted by machine at the Cold Spring fire house and 36 cast absentee ballots. Of that 921-voter total, 918 cast ballots for mayor. “I think the last mayoral election [in 2009] was pretty similar,” Saari said  The data bear that out: Two years ago, out of a total electoral pool of 1,456 voters, 905 participated, according to an unofficial tally, with 854 voting by machine and the others by absentee ballot, producing an overall participation level of 62 percent. In 2007, when Phillips, with 438 votes, overcame a challenge from then-Trustee Phil Heffernan, a total of 844 residents cast ballots for mayor. The total number of voters eligible in 2007 was not immediately available.
Local elections that do not involve the mayor’s office can generate less enthusiasm and lower tallies. For the 2010 trustee election, when two slots were open, only 475 voters showed up at the polls to cast ballots by machine. Saari added that a few absentee ballots came in as well. Overall last year, Charles Hustis got 237 votes and Airinhos Serradas received 219, putting them on the Village Board. Then-Trustee Lynn Miller, appointed in 2009 to fill out the last year of Gallagher’s trustee term, sought a seat in her own right but lost, with 202 votes. Another contender, Dave Heberling, got 213 votes. “I think mayoral elections do tend to bring out more people. Maybe it seems like the stakes are higher,” Gallagher said on March 22.
This month’s Cold Spring voter participation level topped that of Putnam County in last November’s race for governor, when 55 percent of the county electorate, or 31,882 of an eligible 58,370 registered voters, cast ballots. Village voting participation also was higher, percentage-wise, than that for the last three national presidential elections. In the contest between Barack Obama and John McCain in 2008, 58 percent of the nation’s registered voters cast ballots. The 2004 fight between President George W. Bush and Senator John Kerry brought out 61 percent of voters nationally, and the 2000 election pitting Bush against then-Vice President Al Gore saw 51 percent of registered voters take part.
Photo by L. S. Armstrong