The reviewers of Joe Berlinger’s 2009 cinema veritíe documentary, Crude, couldn’t resist the David and Goliath metaphor in characterizing the story. Goliath is played by U.S. oil giant Chevron, which, when it merged with former oil giant Texaco in 2001, inherited a class-action lawsuit filed in 1993. The suit charged that, from the 1960s until the early 1990s, Texaco dumped 18 billion gallons of oil-drilling waste directly into streams and rivers, and directly on the Amazon jungle floor of Ecuador; that nearly 18 million gallons of crude oil was spilled and leaked from pipelines; that more than 235 billion cubic feet of natural gas was burned into the atmosphere; and, that nearly 1000 unlined toxic waste pits were built throughout the region. 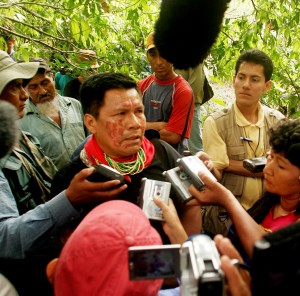 Emergildo Criollo, a leader from the Cofí¡n indigenous community, testifies at the trial against Chevron (From Crude)

David is, well, a cast of thousands: 30,000 Ecuadorian rainforest dwellers, mostly indigenous, represented by 37-year-old oil-field laborer turned human rights activist turned lawyer Pablo Fajardo, arguing his first case (assisted by tough New York lawyer Stephen Donziger). The lawyers and their plaintiffs claim that the pollution caused by the oil extraction created a “death zone” in 1,500 square miles of what was once pristine  rainforest — the Oriente, now referred to by environmentalists as the “Amazon Chernobyl” — resulting in increased rates of cancer, leukemia, birth defects, poisonings, and numerous other health problems. They also allege that the oil operations in the region have contributed to the demise of the area’s indigenous tribes, and of their traditional cultures.

It would be easy to tell this story solely from the perspective of the Ecuadorian forest dwellers, and there is plenty of evidence to show that they have been grievously wronged.  And, too, Chevron would be an easy mark as evil-doer, given the continuing history of corporate environmental depredations, (Bhopal, Exxon Valdez, BP, etc). But producer/director and cinematographer Berlinger (Brother’s Keeper, Paradise Lost, Metallica: Some Kind of Monster), while clearly framing the case as one of harms done to humans and to the environment, is just as clearly interested in the larger context: the tangled web we’ve woven in creating a political and economic 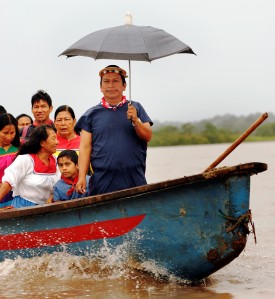 system controlled by large corporations and dependent on “industrial exploitation,” the law of the land.  Just how tangled, and to what degree the law of the land, is evident in the most recent turns in the case: after having been found guilty in February and fined $9 billion in damages in the Ecuadorian judicial system, Chevron obtained a preliminary injunction in U.S. District Court for the Southern District of New York on March 7, barring the plaintiffs from enforcing the judgment. According to Joe Berlinger, this accords with Chevron’s promise of a “lifetime of litigation.” He should know: last year Chevron served him with a request for more than 600 hours of outtakes for Crude.