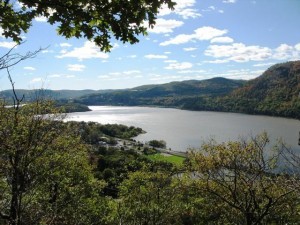 In the 19th century, when the Hudson River served as a prime transportation route, people encountered the mountains, hills and forested shoreline of the Highlands from the decks of ships—relatively fast steamboats or slower sloops and schooners.  Today people mostly encounter the Highlands from a land vantage point with the river as the center focus. This difference in perspective and appreciation of the Hudson Highlands—from the water or from the land—as expressed by a variety of literary and visual artists was at the heart of a lecture, “Imagining the Highlands of the Hudson” sponsored by the Putnam County Historical Society and presented at the Foundry School Museum in Cold Spring last Saturday evening, March 26.
The speaker, Stephen P. Rice, a professor of American studies at Ramapo College in Mahwah, New Jersey brought both an academic and personal interest to the subject.  Rice has had a life-long scholarly interest in American history, and he came to realize that a great deal of the country’s history resides in the Highlands. The personal aspect stems from living with his family on the west bank of the Hudson in Cornwall, N.Y. for the past ten years. 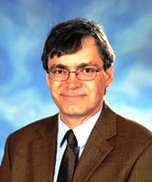 Rice generated laughter early when he transposed today’s Hudson Highlands name to the older moniker Highlands of the Hudson.  But from the seeming prosaic difference Rice drew meaning. “For the people then it wasn’t about a stretch of scenery that had the same name as the river, it was the stretch of scenery they associated with the river…because for the most part they (artists and writers and people who read and saw their work) knew the region from the river by traveling up and down it from New York City to points north such as Newburgh,” he said. Displaying slides of paintings and prints depicting different river scenes Rice provided his audience with a number of visual and textual expressions depicting the Highlands from a 19th century perspective. “Since you live in Cold Spring you know that this stretch of river was a great inspiration to many people, fiction writers, artists and poets,” said Rice.
He began his survey by describing the three distinct lenses through which artists viewed the Highlands as the 19th century progressed. The first (1820-40) was the perception of mystery and legend existing in the hills, including the presence of woodland fairies and imps and other creatures of lure. The second (1860-75) was the enhanced appreciation of the natural beauty and the physical and spiritual regenerative possibilities nature offered.  And the third (1870-99) was the increased recognition of the national historical significance of the area with its forts, weapons foundry and battle scenes from the Revolutionary War.
Rice explained that before the Erie Canal opened in 1825, the journey up river was still slow and relatively isolated, creating an aura of mystery, especially in the dark.  Among several writers he cited Joseph Rodham Drake (1795-1820), author of a then famous poem published in 1819, “The Culprit Fay” depicting a nighttime walk through a Highlands populated by tiny magical creatures whose world disappears come sunrise.  Many versions were published, one with woodcut prints by noted artist Arthur Lumely, illustrating many of the fairies, imps and sprites Drake described.
George Pope Morris (1802-1864), a famous Cold Spring resident and prolific writer whose house afforded a view across the river to Crow’s Nest, the hilltop south of Storm King, wrote a poem “Where Hudson’s Waves with the lines: “Old Cronest like a monarch stands, /Crowned with a single star/And there amid the billowy swells/Of rock-ribbed, cloud-capped earth/My fair and gentle Ida dwells, /A nymph of mountain-birth.” Mythology students will recall Ida as a nymph who helped raise Zeus.
Another example of a romantic Highlands perspective cited by Rice, was former Secretary of the Navy James Kirke Paulding (1778-1860), who wrote a poem “Dawn in the Highlands”, imagining “the waking morn as the opening eyelids of a vibrant and light-filled goddess of the woods.” His son was an owner of the Foundry in Cold Spring.
With more steamboats and more destinations, river traffic increased as the years passed. “At all times the river is filled with watercraft of almost every description. The most striking objects on its surface are fleets of barges from the northern and western canals loaded with the products of the fields and forests, tethered together and pulled by a steamboat,” wrote Benson Lossing (1813-1891), a noted Poughkeepsie historian and writer, in 1860. His book is on display at the Foundry Museum.
Rice spoke at length about Nathaniel Parker Willis (1806-1867), a fellow journalist of Morris’s, who came to the Highlands from New York for his health, as it was believed the air was cleaner.  He built a home in Cornwall called “Idlewild” and wrote many articles about country living and the natural beauty of the region and its potential for spiritual renewal. He did much work to create trails and clear areas for contemplating nature. “About forty miles from New York we enter upon the Highlands as a series of mountains which then flank the river on both sides. The beauty of this scenery can only be conceived when it is seen. One might fancy that these capricious masses with all their countless varieties of light and shade are thrown together to show how happy lovely rocks and woods and water can be,” wrote Frances Trollope (1779-1863), a prolific British writer, according to Rice.
Rice noted the Hudson River School painters as popular chroniclers of the Highland’s natural beauty. He cited painter Samuel Colman’s work “Storm King on the Hudson” as an example with a particular local emphasis. Rice said that even early writers appreciated the historic significance of the Highlands given the events involving West Point, Fort Montgomery and stories about Benedict Arnold.  But he argued that by the late 19th century, in the aftermath of the Civil War, many books, including guides to the area, began to emphasize the historical and military events over the region’s natural beauty, extolling the sacrifice the revolutionaries made to give birth to the nation.
Today, Rice observed, the region’s historical significance remains important to our collective view of the Highlands, as does the natural beauty, the preservation of which can sometimes be a controversial subject.  Rice closed by stressing the importance of reflecting on how we see the Highlands not only for our own time but to help determine how it is viewed by future generations. “We probably have lost the sense of mystery and legend, but I may be wrong about that,” he said.