Only a half dozen residents attended a meeting at the Cold Spring Village Hall on March 30 to hear both accolades and complaints regarding the Metro-North Railroad’s service in the area. The meeting was hosted by the Permanent Citizens Advisory Committee (PCAC) to the Metropolitan Transportation Authority (MTA) and was chaired by Neal Zuckerman, a Garrison resident who serves as the Putnam County representative on the PCAC.
While there were some compliments handed out by residents, most were there to air concerns. Karen Jache, who lives near Manitou, questioned the wisdom of the 6:30 p.m. start to the meeting. “I had to leave work early and catch the 5 p.m. train to get here” she said. Jache also criticized Metro-North’s current practice of reverting to a weekend operating schedule during weekday snow events.  The weekend schedule does not include a stop at Manitou for commuters headed to New York City. She said that while normally there are only about three commuters who board at Manitou, during snowy conditions as many as fifteen people park and walk down to that station – but end up stranded when not aware of the schedule change. “There should be an emergency schedule [that would include a stop at Manitou] rather than using the weekend schedule” she said. Jache has on occasion driven stranded passengers into Manhattan.
Laura Kissack has commuted on Metro-North for 15 years. “I’d like to congratulate Metro-North for having more than doubled the cost [of ridership] while providing less and less service” she said. Kissack received strong support from others at the meeting when she suggested that “quiet cars” be added for early morning and later evening commuters. “Quiet cars,” which attendees said are used successfully in other areas such as New Jersey and Massachusetts, prohibit the use of cell phones. “It would also nice if the loud speakers worked 50 percent of the time. And half the time the workers don’t know how to use the speaker system,” Kissack said. She also complained about problems caused by drunk passengers who board the train at Yankee Stadium after games. She suggested special cars be added for fans and said Metro-North conductors often make a bad situation worse because they often antagonize the inebriated fans. “Just leave them alone,” she suggested. Finally, Kissack said that “At no time should there be a darkened car just for Metro North workers – they get to ride for free – we don’t.” Regular passenger cars are lit at night. 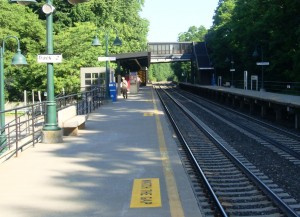 Lack of WiFi was also identified as a shortcoming. Resident Dick Turner said that wireless computer hookup is available on trains in the Boston area and suggested Metro-North follow suit. When Zuckerman asked him if he was willing to pay for such a service Turner replied with a simple, “Yes.”
Cold Spring Mayor Seth Gallagher urged that action be taken soon to repair the Lunn Terrace bridge. “We have concerns about its condition,” Gallagher said. “Pieces of cement have fallen [off the bridge.] For us it’s a priority and we don’t want to wait until it’s too late. The Village is responsible for paving and snow removal but the railroad is responsible for the structure.”
Putnam County Executive Paul Eldridge reminded the PCAC contingent that the county makes a significant financial contribution to the railroad through the MTAs payroll tax. “Six million dollars [a year] from such a small county is a lot of money” he said. Eldridge said that while people have told him that on-time performance has improved in the past 8-10 years there are issues still to be resolved including the addition of “quiet cars” and better snow removal at railroad station parking lots.
Other concerns raised included excessive use of train horns near Manitou, lack of availability of ten-trip tickets at local train platforms, lack of coffee vending machines at Garrison and inadequate scheduling of trains serving Marble Hill at night.
In his opening remarks Zuckerman said that as a volunteer he had “no vested interest” in serving as Putnam County’s Representative on the PCAC. “I do it because I believe in the economic value of the Metro-North Railway” to the county. Zuckerman quoted statistics to support the significance of Metro-North’s service to the area, stating that during weekday peak periods an average of 344 riders disembark in Cold Spring daily while 168 riders arrive during off-peak periods. He said ridership is greater on weekends with an average of 376 riders coming into Cold Spring on Saturdays and 406 on Sundays. He also said there is a waiting list of commuters interested in using one of the 223 parking spaces in Cold Spring.
The PCAC is a 38-member advocacy group representing the interests of train passengers and has a non-voting seat on the MTA board of directors. The group was originally established by the MTA but in 1981 the New York State Legislature passed legislation creating three independent riders’ councils – Long Island Rail Road, Metro North Railroad and New York City Transit. PCAC members receive no pay and must be regular users of the MTA. PCAC has a full time staff of five planning professionals who are paid by MTA but who answer to the PCAC in order to maintain its independence. Staff attending the Cold Spring meeting included Executive Director Bill Henderson, Associate Director Janice Wells and Transportation planner Ellyn Shannon. Metro North
Photo by M. Mell