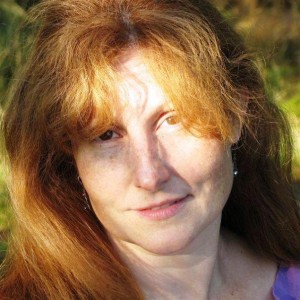 Putnam Valley and Philipstown lost a talented and much-treasured friend, artist, activist and neighbor with the recent passing of Ariane Orenstein. Orenstein, who lived in Putnam Valley, and was a former co-Chair of the Putnam Valley Democrats, was extremely active in many civic capacities and had a full artistic life as well, participating in many productions at the Depot Theatre.  She died last month at the age of 51, after a year-long illness.       This weekend at the Depot Theatre, the Aery Theatre Company is honoring Ariane’s memory with a celebration of her life.  The Aery’s usual Spring One-Act Festival, which also takes place this weekend, has been re-named “The Ariane One-Act Festival” in tribute. Aery founder Pat Lennon describes how this all took shape:

“Aery Theatre Company was just beginning the process of putting our Spring One-Acts Festival together when I received word of Ariane’s passing.  Ariane was an original member of Aery, her contributions to our growth coming from on and off the stage.  We decided immediately that the festival should be dedicated to her, considering that this was the work in which she loved to be involved – presenting original stage plays in the wonderful and historic Depot Theatre. 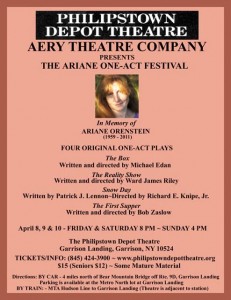 I spoke with her good friends Nancy Swann and Judy Allen, who already been thinking of organizing a celebration of Ariane’s life, and told them of our dedication plans and they were delighted – and suggested that, since the festival begins on April 8 (what would have been Ariane’s 52nd birthday), we might combine this celebration with the actual festival itself.  What was ultimately decided was to have a gathering at the Depot at 5 p.m. on Saturday, April 9, with songs, poetry, videos, slideshows and stories celebrating our friend.  Afterwards, we will move the celebration across the street to the Garrison Art Center (who graciously donated their space) for food and beverages.  At 8 p.m., we will move back to the Depot for the festival itself, which includes four original one-act plays by Aery Theatre playwrights.
The excitement that has been generated in the Depot Theatre community has been electrifying and infectious, with dozens of people offering to contribute in anyway possible to make this event what it should be — a celebration of the life of an incredibly beautiful person, who will be emulated for her humanity and missed greatly.  Anyone who was graced with knowing her understands this.”

Actress and director Nancy Larsen was a close friend of Ariane’s, and described her as a friend to many, “Her friendships cut through a big swath of people; she had a large pool of friends.  She was very popular and was able to keep her friendships going. She was very loving and supportive of her friends, never a bad word to say, so rare.  She always laughed the loudest — a fabulous audience member.   She was a trained singer, an actress, and she worked for Consumer Reports, testing products — she was always able to tell you which of your small appliances was likely to catch on fire! It was in her blood to be in the arts.  Her parents were both professional musicians, and her son is in training to be one now.  I think she studied at Stella Adler and believe she was a founding member of Peekskill Repertory Theatre.”

As much as the arts were a focus of Ariane’s life, so too was local politics.  She had lived in Putnam Valley for decades and cared deeply about the Town.  Her colleague, former Putnam Valley Democrats Chair Karin Greenfield-Sanders, offers this remembrance:

“The Putnam Valley Democrats are heartbroken at the loss of our former Chair, Ariane Orenstein.  Her year-long illness and death were a true loss to our committee as she was a vibrant, dedicated, Democrat who chaired the committee with enthusiasm and kindness. Ariane and I became very close friends working together for the Putnam Valley Democratic Party. I will never forget the enchanting party that Ariane organized soon after she became Chair for Barack Obama’s Inauguration at YMCA’s Camp Combe in Putnam Valley.  It was a free event with food and drink and live music (performed mostly by Ariane’s son Kiril and his band) and it was open to all interested people in the area, regardless of party affiliation.  There were over 100 in attendance, from as far away as Ossining. It was a delightful night for progressives.
Ariane was intelligent, irreverent, indomitable, charming, witty, enthusiastic, skeptical, political, loving, kind, talented and irrepressible.  She was much too young to die. Her son Kiril, who is 20, survives her, as do her parents, Marty and Harriet Orenstein and her brother, Ethan Orenstein.  I miss her very much.”

Nancy Larsen describes Ariane as “petite, very witty, smart, and intelligent— and she could be outspoken.  She had beautiful long red hair, her trademark.  She touched many people’s lives, either artistically or as a marvelous, wonderful friend; you never failed in her eyes.”

Ariane was diagnosed with metastasized lung cancer about a year ago, “out of the blue,” according to Larsen.  Over the past year her many friends cared for her, spending the night, driving her to appointments and marveling as she continued to pursue things important to her. Larsen says “We’d stay overnight and then wake up to find she’d cooked us breakfast — that was Ariane. She was trying to start writing a one-woman show, and she wanted to include her bout with cancer in the show. She was hopeful about her illness.  A week before she died, she attended Tartuffe [at the Depot Theatre].  Although she was in a wheelchair, she was able to enjoy the performance and she laughed.  She told me that she would have laughed more, but she thought that some of her laughing would be inappropriate.  I said ‘that’s so like you!’  Her passing was a surprise.”

Ariane’s close friend and fellow performer Cat Guthrie shared these thoughts: “I was honored to stay with her several times as she moved through this cancer. One night stands out, and is quintessentially Ariane. On this night she knocked on her bedside table, which was our cue that she was having one of the seizures which she suffered from as her cancer progressed. She was unable to speak, but I held her so she wouldn’t hurt herself. When she came through the seizure and got her speech back, she said to me, “I am afraid I am going to become a vegetable.” and with perfect comic timing she added, “And I am afraid it’s going to be one I don’t like.” We both laughed, and I was so grateful that my beautiful brave friend could find the humor in even the most dire of circumstances.
My friends and I were talking about her last night, and what we realized was that Ariane was so open hearted that she offered all of us unconditional love. Some times it scared us; we’re not used to feeling that much openness from others. But we all thought we could learn from it, and Ariane showed us what was possible.”

Larsen describes Ariane’s son, Kiril as “a wonderful person.  He has a band called “The Toothaches” and is studying jazz at The New School.  He’s a chip off the old block: smart, talented, funny and handsome.”

Ariane’s Consumer Reports web biography, written a few years ago, contains her own description of parts of her life: “Ariane Orenstein is passionate about working for WebWatch and Consumers Union, and says it’s the best day job she’s ever had. Orenstein is a graduate of New York University’s Tisch School of the Arts and the Stella Adler Conservatory. During her long involvement with the arts, she’s worked as performer, producer and writer, and has been appearing regularly at the Depot Theatre in Garrison for almost a decade. A former partner in Hautbois, Ltd., a catering service providing live chamber music, she has also produced stand-up comedy, blues concerts, arranged recording sessions and edited articles published in International Musician. Orenstein was raised in New York City and Leonia by classical musicians, and now resides an hour north of the city in a house on a dirt road with her precocious 17-year-old son.”

Ariane’s shows at the Depot included Dracula, The Odd Couple (as a Pigeon sister), A Day in Hollywood, A Night in the Ukraine, Blithe Spirit, children’s theater, including The Lion, the Witch and the Wardrobe and Fractured Fairy Tales and many Aery Theatre productions. This Saturday’s celebration of Ariane’s life is open to all. For more information, visit www.philipstowndepottheatre.org/.

9 thoughts on “A Celebration of the Life of Ariane Orenstein: Generous, Outspoken Spirit”