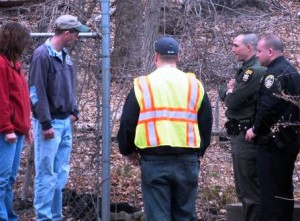 State, county and local responders converged at the intersection of Route 301 (Main Street) and Fishkill Road in Nelsonville Thursday afternoon (April 7) after the discovery of oil leaking into Foundry Brook through a storm-water drainpipe. The oil, mixed with water, was drizzling into the brook from a pipe located in the commercial area that includes Pete’s Hometown Deli and other businesses. No official present seemed to know when the oil was first discovered. Police and fire personnel acknowledged they responded to a 911 call.
As this report was posted, no source for the leak had been identified and officials acknowledged the oil could have originated some distance from the immediate area of the drainpipe or Main Street. The oil presented no threat to nearby homes or water supplies but officials were concerned about environmental damage if significant oil made its way downstream toward and eventually into the Hudson River. Underscoring the concern, Foundry Brook was running hard and fast from the recent rainfall.
The county hazardous materials team, composed of specially trained volunteer firefighters from various county fire companies, was summoned by the Cold Spring Fire Company to address the immediate spread of the oil. The firefighters deployed an absorbent circular boom into the stream to collar the oil as it emerged from the drainpipe. They also used large absorbent pads to soak up oil both at the brook’s bank and in various storm drain culverts on Main Street.
In consultation with others, including Philipstown Highway Superintendent Roger Chirico and Greg Phillips, Cold Spring water and sewer superintendent, state Department of Transportation crews opened various drain covers on the street to determine if oil was present and then to assess oil volume and flow to ascertain a possible direction for the source. Some oil did appear present in drains on both the north and south sides of Main Street but leaves and debris made it difficult to determine the amount. Over the course of two hours various scenarios were formulated and rejected as officials shared their collective knowledge of the web of pipes running underground.
An enforcement officer from the state Department of Environmental Conservation (DEC) and an official from the DEC’s spill response team walked across several properties examining outdoor oil tanks and testing nearby soil seeking evidence of errant oil. Although they would not comment, there were no indications they were successful in determining a leak source. It was also apparent officials were trying to determine ownership of various residential and commercial properties and that calls were being made to obtain entry to interior spaces for further investigation. Officially no one present would comment on the extent of the investigation or possible fines or other consequences. One official was overheard commenting “someone is going to get a big bill over this.”
Asked what he thought had occurred, Nelsonville Mayor Tom Corless, who actively consulted with all the officials present, said he believed heating oil was the likely source. “I would venture to say that’s what it is, whether it’s an active tank or an old tank, we don’t know, that’s what we have to find out.” Corless was joined at the scene by both his fellow trustees, Ande Merante and Peter Tomann.
Photo by K. Foley

One thought on “Oil Discovered Leaking Into Foundry Brook”