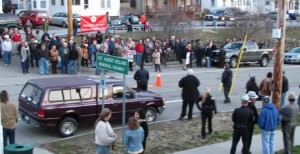 A restrained and orderly group of approximately 75 people stood outside the Philipstown Town Hall Thursday evening (April 7) to protest the idea of Town Board adoption of a law banning weapons from town property. The size of the group, although relatively large for Philipstown issues, was less than organizer predictions of several hundred. Organizers, which included the Philipstown Republican Committee and the New York State Rifle and Pistol Association, had expected a Thursday vote on a weapons ban law first proposed by Town Supervisor Richard Shea. But the proposal was not on the agenda, and Shea had previously indicated to Philipstown.info his intention to pursue various ways to reach his goal, including discussions with all parties. 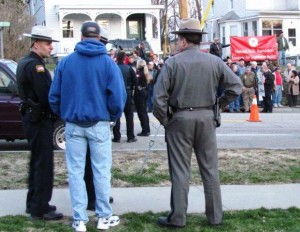 The protestors held up signs urging a “no vote” on a weapons ban on town property. There were no speeches or slogan-chanting, with participants choosing to mostly speak among themselves. Law enforcement was out in strength with four officers from the Cold Spring department joined by several county sheriff deputies and a couple of state troopers. But aside from some traffic duty, the officers mainly talked to each other.
Republican State Senator Greg Ball, whose district includes Philipstown and who used a legislative mailing to urge constituents to come to the rally, showed up just long enough for a group photograph before getting back into his car without making any public comment.
Mary Ellen Odell, a former county legislator and Republican candidate for Putnam County executive, stood with the group for most of the rally. Asked her intentions she said only: “I am here to protect the Second Amendment.” She declined to answer other questions. In an April 4 press release Odell was quoted as saying: “This proposal in Philipstown is nothing less than government infringing upon the freedoms of law-abiding citizens. We’re tired of such attempts from the state government, and we absolutely will not stand for it at the local level.” 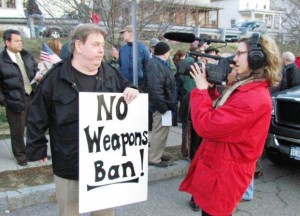 Local resident Sue Peehl interviewed one of the protesters

Philipstown’s Republican County Legislator, Vinny Tamagna, was notably absent. Tamagna declined to answer questions from Philipstown.info on the rally over the three days prior to the event. His office said only he had too many meetings.
It was difficult to tell how many people in the crowd were from Philipstown. Several people thought to be local residents politely but firmly declined to answer questions about their attendance at the event. The main purpose of the group appeared to be making their position known at the actual town meeting. Aware of the procedural rules limiting public comment on non-agenda items to near the end of the meeting, participants waited until about 8:15 p.m. before a group of approximately 15 people entered the hall to attend the meeting. Since several people had gone in individually beforehand, some in the group later found the room at capacity and had to be turned away.
Photos by M. Turton