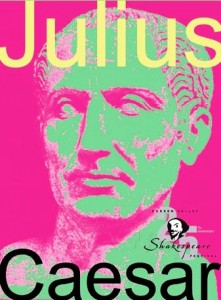 Most know the Hudson Valley Shakespeare Festival (HVSF) from its summer productions at Boscobel. What are perhaps lesser known, though no less valuable, are their educational outreach programs. Access Shakespeare is one of the programs made available to schools throughout the Hudson Valley. Their website describes the program as a “dynamic and fully staged production” presented “with an eye toward accessibility.” This year’s production of Julius Caesar is set in the present and focuses “on the dilemma faced by Brutus in deciding to assassinate his best friend, Julius Caesar, for the good of the republic.” Staged as a political thriller it “brings up poignant questions about patriotism vs. treason, love vs. betrayal and one’s moral obligation to self, his fellow man and society.”
Aimed at students in sixth grade and up, the productions are compressed to approximately 90 minutes and are performed with no intermission. Afterwards, the company provides a 20-minute “talkback” with students discussing the themes and characters in the play, answering questions and soliciting students’ points of view. The HVSF brought this production to the Depot Theatre for two performances last Saturday, April 2.
Most audience members at the evening performance were well past sixth grade, but the energetic pace and performance of the play made it continually engaging with the six cast members performing multiple roles and often moving into the audience and addressing them directly. The open stage at the Depot allowed easy transitions in the action with only minimal props and a sound score needed to set time and place. Scaled for school auditoriums with audiences of 500, the cast fairly bounced off the walls (sometimes literally, with large banners) in the intimate confines of the 80-seat Depot Theatre.
During the talkback afterward the cast spoke about the process of compressing the play to meet time constraints, and the balance that must be maintained between the physical action of the play and character development as it informs the thinking and decisions made by each character. In this production a decision was made to feature the larger themes of tyranny, patriotism, activism and terrorism, even though some of the cast acknowledged that scenes necessarily cut for time create discontinuities in understanding the decisions and actions of the characters. It also created, for this viewer, a sense the cast was racing against the clock, which is, perhaps, a sacrifice necessary to maintain students’ attention.
Discussing the creation of the production, a cast member said that the revolution in Egypt was taking place as rehearsals began and that that informed the tenor of the play. Other cast members cited parallels in the play to anti-Vietnam War protests held in the 1960s. Certainly other events are taking place around the world that will resonate with students seeing this production of Julius Caesar.