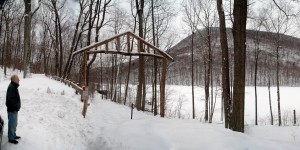 Philipstown.info has received word of the passing of Cold Spring’s Phil Vartanian. Vartanian, a noted advocate for the environment, was found dead in his Lake Valhalla home early Thursday morning, April 7. The cause of death has not been publicly confirmed as of this writing, but was reported as resulting from a fall within his home. Vartanian’s close friend, Russ Cusick, provided this account: “Apparently, two of his workers from his tree service company had tried to contact him Thursday morning and when he failed to respond to their calls, they visited his home, [and] let themselves in. Upon entry, the two found Phil dead. They called 911 and tried resuscitation, but Phil was apparently cold, according to the workers. Apparently, he’d fallen…and had suffered major head trauma.”
Town Councilwoman and fellow North Highlands resident Nancy Montgomery shared these thoughts after hearing the news: “I will be forever grateful for our decade-long, front porch conversation, as he shared his wisdom about holding on to the gift of Philipstown. There was nothing that gave him greater joy than his son Ben.”
May these words from [Walt Whitman’s] Leaves of Grass help bring Phil home:

A child said What is the grass?
etching it to me with full hands;
How could I answer the child?
I do not know what it is any more than he.
I guess it must be the flag of my disposition, out of hopeful green stuff woven.
And now it seems to me the beautiful uncut hair of graves.
What do you think has become of the young and old men?
And what do you think has become of the women and children?
They are alive and well somewhere,
The smallest sprout shows there is really no death,
And if ever there was it led forward life, and does not wait at the end to arrest it,
And ceas’d the moment life appear’d.
All goes onward and outward, nothing collapses,
And to die is different from what any one supposed, and luckier.

Another Lake Valhalla friend of Vartanian’s, Jonathan Kruk writes: “We are in mourning here at Lake Valhalla. Phil was our community’s defender and advocate.”
Vartanian’s close friend and fellow environmental activist Suzie Gilbert has written: “How do you accept so profound a loss? If only Phil were here to talk us through it. He’d probably just grin and say he’s gone from one Valhalla to another, although his spirit will always be part of the lake.”
Russ Cusick, forwarded these thoughts: “Back in February, I was working in my Beacon Gallery, until the wee hours of the morning. At around 3:45 a.m., I decided that I’d close up shop and head home. At the hour I left, there was a fairly significant amount of snow accumulation, and the roads were frozen. I tried like hell, to get my little Honda Accord up East Mountain, where my partner and I live, but to no avail; it wasn’t happening. What to do? … I know… I’ll call Phil, perhaps I can conk out on his couch?!
Somewhat reluctantly, and because I didn’t want to sleep in my car, or the floor of my place of business…. I called my good friend at around 4 a.m. He groggily said absolutely… come on over. I did … we had a cup of herbal tea … listened to a little music and then I proceeded to crash, and sleep like a baby on his large old comfy sofa ….with Phil’s extraordinary dog Sasha, snoring away on the floor below me. That morning, Phil and I decided to visit of one of the great loves of his life … Lake Valhalla, which was conveniently in his own backyard. Rest In Peace, my dear friend. You were a TREASURED and RESPECTED friend to many, and I for one, will never forget you!”

After sending the above thoughts to Philipstown.info, Cusick followed up with this story:

“Tuesday (April 5) afternoon, I called Phil and asked him if he’d like to join me for dinner at Cafe Maya. Phil had his usual: taco salad and a frozen margarita with salt. Phil and I talked about a lot of things, including how proud of his son Ben who is in his first year of college, up in Boston… and also, the fact that he’d just had an INCREDIBLE experience…he was driving along the dirt road that leads to his home in the North Highlands and he spotted a red fox. The fox appeared to elderly, and had a limp. Phil told me he got out of his car, and sat on a rock along side the dirt road. The fox did not flee, he just stood at a distance from Phil and they “eyed,” one another. Phil thought to himself, ‘Do I have anything to feed the fox?’ and, as fortune would have it, he happened to have a box of crackers in his car. Phil took some crackers out of the box, put them in his hand, and the fox slowly came up to Phil, ate the crackers, looked into Phil’s eyes, and then slowly limped away. When Phil was telling me this story, I just couldn’t believe that a wild fox would trust a human being in that manner, but Phil was perhaps the most gentle soul I’ve ever had the pleasure of knowing, so this encounter was actually pretty easy to visualize. After dinner we told one another, as we always did, that we loved one another. Yesterday, I received a call from Nancy Montgomery, who was a very close and dear neighbor and friend to Phil; Nancy sadly let me know that Phil had died.”
Photo by R. Cusick

A memorial service is planned for the future.

10 thoughts on “Phil Vartanian Passes Away”