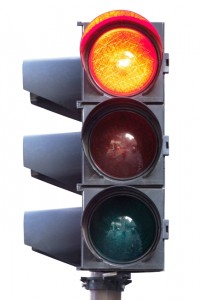 It was a classic case of “good news and bad news” when Richard Dillman, a representative of the New York State Department of Transportation (DOT), appeared before the Philipstown Town Board on April 7 to provide an update on the much-anticipated traffic signal slated to be installed at the corner of Route 9 and Fishkill Road. The Town has been strongly lobbying for the stoplight for years in order to slow and control traffic at the intersection. Route 9 is a State Highway and Fishkill Road comes under the jurisdiction of Putnam County. That section of Route 9 has been the scene of numerous serious traffic accidents in recent years and is widely regarded as one of the most dangerous stretches of road in the area.
Dillman delivered the good news first when he reported that a contract had been let which will see the traffic signal installed within the next two months. The less-than-good news lies in some of the project details. Local officials had hoped that the speed limit for traffic approaching the intersection on Route 9 could be reduced, however Dillman said that traffic studies conducted by DOT indicated that the current speed limit of 45 miles per hour was appropriate for conditions in that area and that it won’t be changed. When Town Supervisor Richard Shea asked if a turning lane for southbound traffic exiting Route 9 onto Fishkill Road was in the offing Dillman responded, “Not at this time.” When pressed as to whether or not a turning lane could be explored further he responded with a simple, “Yes.” 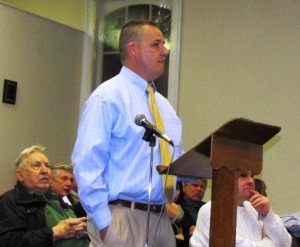 Some of DOT's Richard Dillman's answers were not well received

One of the major concerns expressed at the meeting was how the new traffic light will affect vehicles exiting or entering the gas station located at the north end of Philipstown Plaza directly across from the intersection. While the proposed signal will control traffic moving north and south on Route 9 as well as vehicles approaching the corner via Fishkill Road, there will be no signal installed for traffic exiting the gas station.  Dillman’s explanation that the entrance to the gas station does not line up perfectly with Fishkill Road was not well received. “The light will control Route 9 and Fishkill Road. They [vehicles leaving the gas station] will have to wait for breaks [in traffic],” he said. Town Board member John Van Tassel pointed out that many of the accidents responded to by the North Highlands Fire Company involve vehicles leaving the gas station. Philipstown resident Joe Giachinta put it in even stronger terms. “We’re not solving anything. I’m dumbfounded that there won’t be a light for the gas station. That’s what causes the accidents now.” When Van Tassel asked if closing the entrance to the gas station directly opposite the intersection is an option, Dillman replied, “That’s one solution.” 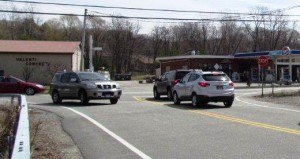 Intersection of Rte 9 and Fishkill Rd

Giachinta also asked if a sign could be installed warning southbound drivers of the new traffic signal. “Traffic will back up when it comes down the hill and around the curve,” he said. Dillman indicated that DOT can “take a look at that” but cautioned that if a traffic signal is visible to drivers from a distance of 1,000 feet a warning sign would be “a wasted expense.”  He also said that he didn’t know if the proposed light will be visible from 1,000 feet up Route 9, a comment that puzzled attendees given that the exact location of the traffic light is already known. Dillman also said that the new light will inevitably lead to an increase in rear-end collisions. Town Board member Nancy Montgomery asked that the Town engineer be allowed to review and comment on the design plan for the traffic signal. “We’re eager for the light but Fishkill Road [at the new intersection at Route 9] was put in by the County without our input.”
In other business Deborah Kopald presented detailed information regarding “the environmental health impacts of the wireless revolution.” Her comments centered on hazardous radiation emitted from such devices as cell phones, WiFi and cell towers. Kopald used graphs and charts to illustrate documented health hazards such as brain tumors, often emphasizing the increased health risks to young children.
Montgomery’s resignation from the Friends of Philipstown Recreation (FOPR) was accepted by the Town Board. She was then immediately appointed as liaison between the Town and FOPR – a group she had helped establish. Shea said that the group represents “a move to make contributions [to recreation] discretionary and not mandatory through taxes.” Jeff Dain and Joe Curto were approved as new members of FOPR.

The Board also accepted the resignation of Garrison resident Joe Regele from the Philipstown Recreation Commission. Van Tassel said that Regele had become “frustrated with the process and the way things are going.” In an email to Philipstown.info Regele explained, “I resigned over a disagreement as to how, by whom, and for what, private funds should be raised to support the Rec. Department.  A golden opportunity was wasted in service of the status quo by the old guard.” VanTassel said that he has asked Regele to stay on the Playing Fields Committee.
The terms of those currently serving on the Planning Board were adjusted in order to correct an error made years ago which would have resulted in several members’ terms expiring in the same year. Terms are staggered to ensure that a number of experienced members serve at any given time. Ande Merante will now serve a term ending in 2014; Michael Leonard a term ending in 2013 and Pat Sexton a term ending in 2012. The vacancy created by Josephine Doherty’s recent resignation will be filled by a term ending in 2014. Philipstown resident Dave Vickery addressed the Town Board and argued that because the Planning Board deals with public policy, interviews for positions on the board should be held in public. Richard Shea responded that the Town is on “firm [legal] ground” in holding such interviews in executive session. The Town Board also honored Doherty for her many years of service as a member of the Planning Board.
At the beginning of last week’s meeting Shea commented on a demonstration being held at the same time, just across Main Street in front of the Town Hall. A group of about 75 people had gathered to protest the Town’s attempts to institute a weapons ban on Town properties. “It [the demonstration] has little to do with what we do inside this building. Something was said “¦that needed [our] attention. It would have been irresponsible if we didn’t [act.]” He was referring to a comment at a fire services study meeting last January, at which someone in attendance said he was “packing.”
“I consider myself a sportsman. I’ve hunted since I was 16,” Shea said. “One thing we do is we listen”¦we take this seriously”¦we don’t rush things. We try to come to a consensus and that’s what we’re doing with the weapons proposal. We don’t have an agenda”¦our agenda is”¦safety. If people want to make it a political issue that’s their right.” Organizers of the demonstration included the Philipstown Republican Committee and the New York State Rifle and Pistol Association. “There was no crowd when hot lunches for seniors were going to be canceled. I find that confusing,” Shea said. He also said that one thing he could have done better was to have reached out to various organizations earlier in discussions regarding the proposed weapons ban.
A few of the demonstrators waited through a long Town Board meeting, however just before adjournment Shea said that there would be no discussion of the weapons ban that evening.
Photos by M. Turton

One thought on “Will Rte 9 Traffic Light Finally Become a Reality?”