The Garrison Art Center will highlight the work of three artists in a new exhibition, opening this Friday, April 15 (with a reception from 6 to 8 p.m.) and running through May 8. Large paintings and drawings by Enrico Giordano will fill the Gillette Gallery.  Giordano’s tactile surfaces are influenced by his childhood experience of being with his father and grandfather while they made felt hats for their millinery store.  Many materials include those from the hat making process such as felt, wax, and varnish. Dominant colors include earth tones and black, made with concrete pigments and tar based silicone, references from his boyhood experiences of playing sports on Brooklyn’s sidewalks and streets. 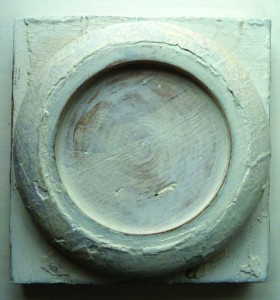 Sculpture by the late Peter Clark will be featured on the Art Center’s Sidewalk Sculpture Gallery. Clark, a former president of the Art Center, and mentor to many, was particularly influential in strengthening the exhibition series in both of the galleries there. After Clark’s death in 2003, a retrospective of his work was produced by Collaborative Concepts, and in late 2005, Garrison Art Center produced Peter Clark-Late Work, an exhibition of mixed media studio drawings.  This will be the first show of Clark’s work since that time, with much of the work never exhibited previously.
In the Balter Gallery are selected paintings by Setsuya Kotani. Art historian and critic Roger Lipsey says of Kotani’s work, “Kotani drives toward the perfect object: the painting as perfect object.  In this, as in much else, he is true to the craft disciplines of his native Japan. Surfaces tend to be taut and durable, as if a veil of hard glaze has been drawn over them.  Compositions are long meditated and meticulously rendered.  Though much in his work is enigmatic–these are poetries with which one can live for many years without tiring of them–the enigmas are presented with utter clarity.”
For more information about other exhibitions, programs and events at Garrison Art Center contact 845-424-3960 or [email protected]