No sport can match hockey’s playoffs

Once again it’s that time of year for true sports fans to sit on the edge of their seats while savoring the most intense, highest caliber event in all of sport — The Stanley Cup Playoffs. The proof of the quality of the event is not found in the subjective, maniacal ramblings of a fan of the game. The proof is actually pretty cut and dry – although those who swear by big league football, baseball, basketball or soccer may undoubtedly find it pretty hard to swallow.
Here are the indisputable facts. Played at the elite, professional level — or for that matter at comparable amateur levels — hockey players, pound for pound, have the strength of a football player, the agility of a basketball player, the hand-eye coordination of a baseball player and the footwork of a soccer player. Their game is played at speeds that participants in other sports can only fantasize about, with the possible exception of NASCAR. Hockey players play at that unmatched speed under the constant threat of being hit hard — not onto the open sideline of a grassy field or into the arms of adoring courtside fans or into a padded outfield wall – but against hard, unyielding boards. And while even the most exciting soccer game may see five minutes elapse between shots on goal at either end of the field — it is quite common to see opposing goalies in hockey make spectacular saves – just seconds apart. How does the game of hockey attain such enviable speed? By requiring its players to be able to skate like the wind, on ice, on razor sharp, eighth-of-an-inch thick metal blades. 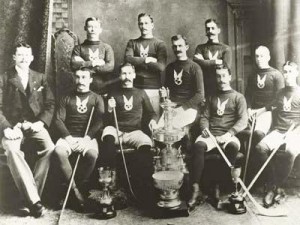 Then there is the trophy itself — The Stanley Cup — that sets hockey apart from and above other sports. The oldest trophy competed for in North American profession sports, it was first won by Montreal AAA in 1893 after being donated by Sir Frederick Arthur Lord Stanley of Preston, England. Montreal won that first Stanley Cup by virtue of its overall season record of 7-1-0. Ottawa finished second with a record of 6-2-0. An eight game season. No playoffs. A far cry from today’s game when the cup winning team may take 28 playoff games to do so after playing more than 80 regular season games and a handful of pre-season games.
When an NHL team wins the Stanley Cup it’s players don’t call themselves NHL Champions or even World Champions – titles they could legitimately lay claim to. They say they won the Stanley Cup. They don’t just want to win the championship — they want that cup. They know that every player who has ever won it has his name engraved on it along with all his teammates — the only sport to do so. The Montreal Canadiens’ Henri Richard has his name on the cup ten times. To view the Stanley Cup is to view is to view more than 100 years of sports history — all on one trophy.
NFL football has a life-size football for its trophy. Likewise the NBA has a life-size basketball. The Major League Baseball trophy features a series of flagpoles, complete with delicate flags. The Stanley Cup stands 35 1/4 inches tall and weighs 34½ pounds. Each winning player gets to take it to his home town for a day or two. It often ends up in the local town hall, pub, Legion Hall, library or the player’s living room. Wherever it lands local residents form long lines just to catch a glimpse of it. 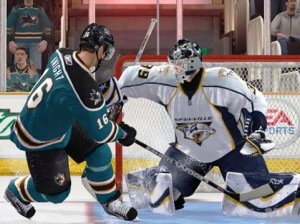 The Stanley Cup has been lost. It has been used to hold ice cream.  It has been stolen. It has been thrown in a river. A baby was baptized in it. Madison Square Garden’s mortgage was burned in it. Mark Messier, who won five Stanley Cups with the Edmonton Oilers and another with the New York Rangers, dented the fabled trophy while it was under his care. He took it to an auto body shop to have it repaired. The cup has had stays in Russia, Japan, and Switzerland. It has sat high atop the Rocky Mountains and inside an igloo in the Nunavut Territory. It has a heritage like no other trophy. Players want their name in it. They want to be part of history.

But hockey has fights. True. But then again even the best marriages have fights. Hockey players just don’t have as much fun making up.

But hockey does not draw the most fans. True again. But then no serious beer connoisseur would ever call that king-of-beers the best brew – even though it may sell the most.

No one is saying that other big league sports don’t provide their fans with amazing moments. Seeing Jack Nicholson sitting in the front row at a Lakers games must be incredibly exciting. The NFL’s end zone celebrations put Dancing with the Stars to shame — and that’s a program we all love. No one could argue that baseball’s seventh inning stretch doesn’t provide just the kind of relaxation that the stressed-out people of today need. And singing a song in unison with thousands of other soccer fans must create many a goose bump indeed.
But if you want to see the best, fastest, most intense, most athletic and most storied event in all of sport — tune in to this year’s Stanley Cup playoffs. This year’s competition began April 13. Whose names will be engraved on Lord Stanley’s cup this year?

In a future column we will unravel the marvels, mysteries and myths of curling.

One thought on “Thank You Lord Stanley”