The Village of Nelsonville Board of Trustees rolled out a preliminary budget at their regular monthly meeting on April 18 for the upcoming new fiscal year, proposing to raise the village tax rate twelve and a half cents per $1,000 of assessed value, from $5.296 to $5.417 or 2.9 percent. The new fiscal year begins June 1.  The trustees will vote on a final budget, estimated to total $558,885, at their regular May meeting.  All three trustees, Mayor Tom Corless, Ande Merante and Peter Tomann were present. 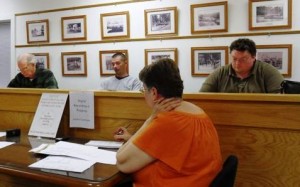 The trustees indicated that street maintenance and repair is the big-ticket item in the new fiscal year with repairs to sections of Healy Road the priority.  The budget anticipates floating a $70,000 bond to fund engineering and labor costs to “redo mistakes that were made in the past on Healy Road,” said Ande Merante.  Work will also soon commence on a previously reported federally funded, four-street repair project, the funds for which were first appropriated by the federal Department of Transportation in 2005. Other than the increased funding for road work, the proposed budget does not contain any new initiatives or significant increases.
In other business, Mayor Tom Corless reported that Putnam County transportation officials were considering the necessity of repairs to a small bridge on Peekskill Road near the cemetery at Bank Street, as well a resurfacing of the entire road.  Corless said that the bridge work could take up to two weeks and might require a closure of the road during the process. He also said that the state Department of Transportation had previously declared the bridge sound as part of its regular bridge testing program.
The state Department of Environmental Conservation has not yet reported on the source of an oil leak in Foundry Brook behind the commercial area containing Pete’s Hometown Deli and other businesses, first reported at Philipstown.info on April 7, or on any plans for remediation of the problem, if needed, according to Corless.  Corless said he believed the problem was minor in impact and has shown no indication of continuing.
Corless also reported that work is ready to begin on a previously reported dry hydrant system in Foundry Brook off Peekskill Road just as soon as the brook water level lowers from the recent heavy rain.
In a reorganization action, the trustees assigned several village government functions, such as liaison to other local governments, among themselves and the reappointed Village Clerk and Treasurer, Pauline Minners.  Also reappointed were George Duncan, building inspector, Stephen Tomann, acting justice and Wayne Rudolph parking enforcement.  Jonathan Bradley is the newly appointed village historian.