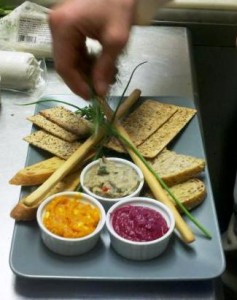 Two and half years or so ago, during his daily commute between his home and what was then his Cold Spring restaurant, Angelina’s,  Michael Pizzolongo would have breakfast at the Garrison Market, and he would think about “how this place could better serve the community.” A few months after thinking hard about it, he bought the market and started thinking harder still. I had lots of ideas for the space when I first took over, but I knew nothing of the local farms.” Two years later, he and his partner, Dave Tuttle, have just expanded the Market into an on-the-premises Friday and Saturday nights-only restaurant called Graze, which opened a several weeks ago.
During the first six months of its life under Pizzolongo, Garrison Market operated as a traditional deli.  At that juncture, Pizzolongo put out “what would you like to see in the market?” cards and hundreds were returned, many with similar wishes: more local, natural options, vegan and vegetarian options, organic drinks, and “¦ pizza.  And so, in its next incarnation, Garrison Market responded to these desires by obtaining a wood-fired oven for creative pizzas, and by stocking the shelves and freezers with a different array of products, accentuating the natural. 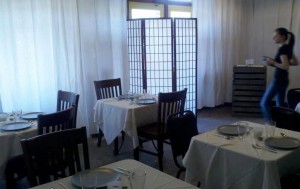 Before the evening rush

Then, along came a partner, former producer and production supervisor and current pie baker extraordinaire Dave Tuttle, who needed a space to accommodate his growing business, and who brought with him an extensive knowledge of the local regional farm scene.  It was transformation time again. Pizzolongo describes the next change: “We went into full farm mode.  We set up one stand outside and it did so well we decided to do away with the pizza. This past winter was spent brainstorming — how to use the full bounty of the Hudson Valley? — and planning and trying out recipes. All became possible when I brought in Dave — he told me where to visit and how to embrace the area.”
Why is Pizzolongo so enthused about the “bounty of the Hudson Valley” he is now serving?  His personal story provides some answers.  He began his working life working at the Trauma Center at St. Francis Hospital in Poughkeepsie, performing CAT scans and ultrasounds.  The emotional intensity of that profession led him to switch careers and become a district manager of stores including Staples and Target. He found himself back in the hospital, this time as a patient.  Forced to take three months off of work, he used it as a time of re-assessment about his life and goals.  Having read the self-help guide The Secret, he “manifested that I wanted to own my own business. I meditated and prayed and within 90 days I had the keys to Angelinas. What brought me to leave Angelina’s were the hours.  I wanted a day spot — and that’s why we’re doing Graze only two nights per week to start.”
As for the culinary end of things, Pizzolongo makes it clear, “Just because I make a great egg and cheese doesn’t mean I can’t cook other things!” Mike has been cooking since childhood. “From 10 years old I was standing on a wooden chair in the Bronx, making marinara sauce with my mom. I’m completely self-taught.  I worked at Frankie and Johnny’s Tavern in the Bronx, then Michael’s Pizza in Mahopac.  Just this last year and a half I started using fresh vegetables and herbs.  Our menu will change every week and will be completely dependent on our suppliers and what they have to offer.  On Mondays I call to find out what they have — nothing frozen, all fresh — and on Wednesdays I confirm it and on Thursdays we pick up. 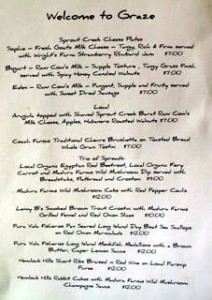 Pizzolongo’s and Tuttle’s culinary skills were confirmed when Philipstown.info visited the Market on the Monday morning following the opening weekend of Graze.  Market customer Howard Davis, hearing of the interview about to take place, exclaimed that his wife, Randi, had been one of the first to dine, and had come home pronouncing it “fabulous “¦ unbelievable!”   In fact the restaurant opened with nearly all of the tables booked for that Friday’s meal and response must have been good, because the Market’s answering machine was flooded with 20 more reservations before the Saturday opening at 9 a.m. Some of the customers dining that first weekend requested reservations for the next. At Graze dining is done tapas style with lots of small plates and sharing encouraged.  Most people order two or three, or perhaps six to eight plates for a table.  The dining experience is meant to be relaxed, and diners are encouraged to take their time in an environment that Mike calls “full, but not crowded.”
The warmer weather will bring outside tables and live music.  They’ll also be partnering with the Depot Theatre for dinner/show packages.  The beer and wine licenses are currently pending, and for now BYOB is encouraged and there is no corkage fee.  The aim is to put in a separate wine bar, within the restaurant, where the counter is currently.
Another facet of Graze is that if you enjoy a particular component of your meal, you may buy it for your own use.  “You like the cheese on your cheese plate: we have it here,” says Tuttle, “anything you experience prepared, you can get unprepared.  We can cook it for you or have it available for you to cook.”
In addition to Graze, Pizzolongo and Tuttle are greatly increasing their Farmers’ Market, which last season consisted of a couple of vendors. Their expanded farmer’s market will open seasonally on May 8, on Wednesdays and Sundays, days of the week “strategically planned” in consultation with the Cold Spring Farmers’ Market, whom they respect and hope to have a happy co-existence with.  As Pizzolongo explains, “On Sundays we get all the people heading back from the Berkshires to the city, plus the hikers.  On Wednesdays, those people who bought at the Cold Spring market on Saturdays will need to refresh some of their produce. We’re trying to be proactive so that you can have fresh vegetables in your diet every day, not a week old, not sprayed with ethylene gas.” They anticipate having produce and other items from a cross-section of 8 – 15 suppliers each week.
Suppliers whose goods will be found at Graze, Garrison Market  and/or the Farmers’ Market include: Blooming Hill Farm/Blooming Grove: meat; Full Moon Farm/Gardiner: meat; Wright’s Farm/ Somers: concord grapes, peaches, heirloom corn, apples, raspberries, apples, homemade preserves, jams, pickled products; Stuarts Farm/ Granite Springs. Apples, Peaches, Pumpkin, Corn, Squash; Dolan Orchards/Wallkill: pears, apples, peaches; Saunderskill Farm/Accord— strawberries; Quimby — raspberries; Renewal Farm/Garrison: lettuce, arugula; Feather Ridge Farm/Elizaville: eggs; Sprout Creek Farm/Poughkeepsie: cheese; Coach Farm/Pine Plains: Cheese; Far-fetched Maple Syrup/Garrison Walter’s Sticky Fingers/Cold Spring:honey; Bear Mountain Roasters: coffee. 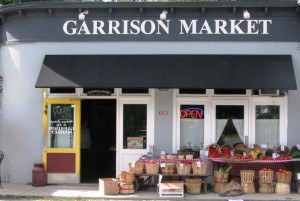 The Garrison Market’s daytime fare has “gone green” as well, and is benefiting from its association with Graze.  It has now been dubbed a market cafí©, not a deli, and the market’s offerings are now quite healthy.  Even the bacon, egg and cheese isn’t what it seems — it’s now made from turkey bacon, Feather Ridge organic eggs and cheddar, on a wheat roll. Their cold cuts are of the healthier variety as well.  All of the baked goods are made from scratch by Tuttle, with local ingredients where possible.  Food is made to order at any time — if you want an omelet or pancakes at 2 p.m., that’s okay — and early in the week lunch-timers may reap the bounty of what’s left over from Graze’s provisions: recent lunch offerings included pan-seared scallops and smoked trout on a bagel.
Tuttle says “we’re interested in the slow food movement and eating seasonally, as our ancestors did.  We’re not interested in just selling products — we want you to discover new foods, for example all of the winter squashes, locally grown, exotic squashes.  It’s always been important to me to share my desire for people to eat more seasonally and more locally, and it supports our local farms.”
Mike echoes this: “With Graze, we want that ‘I’m full, but I feel great’ feeling.  We do want people to graze, on farm-fresh products.  If I can help someone live a couple extra years by feeding them better, my job is done.”
Graze is located at the Garrison Market, 1135 Route 9D.  For more information visit www.grazeingarrison.com/ and www.garrisonmarket.com/ or phone 845-424-6199 for Graze and 845-424-6199 for Garrison Market.
Photos courtesy of Graze and Garrison Market

One thought on “Graze Invites Diners to Do Just That”