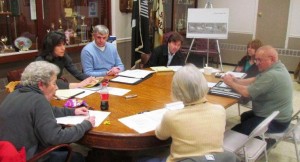 The future of three very significant Cold Spring properties is starting to come into sharper focus.  Conceptual plans for the village truck yard, Dockside and the former Marathon Battery site were presented at the April 20 meeting of Cold Spring’s Special Board for the Comprehensive Plan and Local Waterfront Revitalization Plan. Ray Curran, an urban and municipal planner working in conjunction with the Rhinebeck-based consulting firm Green Plan, presented the plans which will be fine tuned before public input is sought at a community workshop planned for May 14. 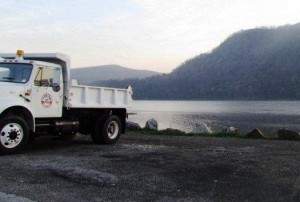 Throughout development of the Comprehensive Plan process there has been considerable support for moving the village truck yard on Fair Street to another location in order to make use of the property for open space, trails and possibly even commercial development. The site offers spectacular views of the Hudson River and the Hudson Highlands. Curran presented three plans or possible phases of development ranging from very minimal change to a complete makeover of the site. The first concept would include little change, with the truck yard function remaining intact. An esplanade or walkway would be established along with six parking spots in order to provide at least some access to river views. The second concept would be more elaborate, to include removal of the salt barn, replacing it with a meeting facility and additional parking and the esplanade would be extended along the length of the site. The third concept would see the entire site undergo major change and would require the truck yard to be relocated. That concept calls for establishing a small, 30 to 35 room inn along with adequate parking. The esplanade would be expanded even further to connect with Fair Street. Curran said that under this plan, the site “”¦would be a very active part of the village.” He also said that a trail leading to Little Stony Point is possible by taking advantage of a “dirt traveled way” currently used by Metro-North.
Special Board member Michael Reisman commented that while he didn’t necessarily agree with all of the recommendations, “It’s great in terms of providing fodder for discussion.” Fellow Special Board member Marie Early questioned the effect of the proposed development on views from residences along Fair Street. Anthony Phillips had broader concerns. “I 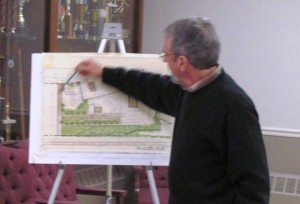 think this [the 3rd concept] takes it away from the village and hands it to anybody who wants to have a bed and breakfast weekend. Do we want to keep the view for residents or open it up to tourists?” Special Board Chair Mike Armstrong disagreed. “There really is no ‘either or’ – residents or tourists. The issue is “¦what is the appropriate balance?”
Curran said that all components in the three concepts are interchangeable and that various design combinations are possible. After reviewing the three concepts Curran asked Special Board members if they wanted him to include a fourth possibility at the May public meeting – that is to develop the site to include up to four houses on lots of approximately 7,500 square feet. “It’s good to show the value of four houses. There’s probably a million dollars worth of land there” Armstrong said. Vice chair Anne Impellizzeri agreed. “For better or worse it’s good to show the housing option.”

Perhaps no property in Cold Spring has generated more public comment than Dockside – in particular its future. Formerly the site of a popular restaurant on the shores of the Hudson River just north of the band stand, the property is now owned by New York State. The Village of Cold Spring is negotiating a management agreement which will enable it to develop and maintain the site. Curran provided overviews of two very distinct plans –  “The Community Scheme” and “The Restaurant Scheme.”
The Community Scheme would include a number of recreational uses – an access road to a boat ramp along with two, 18-space parking areas; a small building for the Building Bridges Building Boats program; a concession stand;  a festival tent area for special events; a pavilion; a fishing pier and seasonal boat moorings in the form of a floating dock. The river’s edge would be protected through use of natural materials. In addition, wooden walkways and viewing platforms would be established leading to the upper elevations on the east side of the property. Curran also pointed out a number of possibilities for trails linking the site directly to the village and potentially including handicapped accessible paths.
The other scheme calls for establishing a modest restaurant on site. There was considerable debate over just what constitutes a “modest” size with Curran initially suggesting a facility with up to 300 seats. Special Board member Cathryn Fadde, owner of Cathryn’s Tuscan Grill reacted, saying, “There probably aren’t 300 seats in all of (the restaurants in) Cold Spring!” At her suggestion the scale was reduced to approximately 120 seats – still adequate to accommodate small weddings. Parking in the range of 40 to 50 spaces would be included. Phillips said that the site is good for a restaurant “”¦for about eight or nine months out of the year.” While the restaurant proposal would include such facilities as Building Bridges Building Boats and floating docks, Curran said that the Restaurant Scheme “goes from community oriented to much more commercial use.” Marie Early said that she hoped any restaurant developed there “would have a window someone could walk up to in a bathing suit to get a hot dog.”

Marathon Battery site
Curran also outlined a concept for development of the former Marathon Battery property as an alternative to the proposal being put forward by developer and owner Ken Kearney. The alternate plan calls for a more traditional block and street pattern and would incorporate traditional neighborhood buildings. In addition to residential development, mixed use would be a significant characteristic of the plan – ranging from commercial and office space to small retail, apartments and possibly three story buildings. The Kearney proposal includes no commercial uses. Also suggested in Curran’s plan is a one acre “green” at the corner of Kemble and Boulevard.
Early pointed out that the Village Building Code does not permit three story buildings, however, Impellizzeri seemed to support the idea saying “”¦maybe the village should look at that [changing the Code.]” Curran also suggested that the Marathon site could be a potential location for the Village truck yard if that site is redeveloped. Early questioned the wisdom of that move, saying that residents “would not be happy” with noise caused by the trucks.
Use of the corner of Kemble and Boulevard as a parking lot was also discussed. Phillips suggested that it could function as a municipal lot serving Main Street, however, Curran said, “My experience is that people don’t park very far from Main Street.” The idea of using that corner for commuter parking has also been brought up, but Metro-North has said that it will only establish parking lots within sight of a train station.
The May 14 Community Workshop will be held at the VFW Hall on Kemble Avenue and will give the public an opportunity to view and comment on the plans for the truck yard, Dockside and Marathon Battery.

Special Board vacancies
In an email to Philipstown.info, Armstrong said that “Several good, capable people have expressed interest” in two vacancies on the Special Board. The openings came about when former members Catharine Square and Marshall Mermell were not reappointed by the Village Board at its recent reorganizational meeting. Armstrong said that applications for the two positions are due April 25 and that candidates will be interviewed on April 28.  The Special Board will then recommend candidates to fill the positions. The Village Board must approve the appointments and could do so as early as May 3.
Square, who has expressed chagrin over not being reappointed to the Special Board, was the only member of the public to attend the April 20 meeting.  After Curran presented plans for each of the properties Square examined the concept drawings closely and took photographs of them. That seemed to rankle members of the Special Board. Marie Early asked Square why she was taking the photos to which Square responded “For my own records.” Early told Square that the Special Board didn’t want the photos be published.

Post Office to stay at Foodtown Plaza?
Karen Doyle, who has acted as a liaison between the Special Board and the Cold Spring Planning Board, recently resigned from the latter. She did however make a brief report on a recent Planning Board meeting which included a presentation by representatives of the U.S. Postal Service, outlining plans which would see the Post Office remain at the extreme south end of Foodtown after the building is expanded out toward Benedict Avenue. Foodtown would then occupy what is now the Post Office.  The plan also calls for the vacant lot behind the current Post Office to be used as an employees parking lot. No representatives from Foodtown attended the meeting. Doyle said that Post Office representatives commented that whether the Post Office stays at Foodtown or moves to the old Butterfield Hospital site, a temporary Post Office, such a the trailer used after the Grand Union fire, will be needed.
Special Board member Michael Reisman commented, “I might be naive but it seems encouraging that the Postal Service wants to stay in the village” to which Doyle responded, “We need to keep in mind that any expansion of Foodtown means more trucks and we already have too many.”
Photos by M. Turton