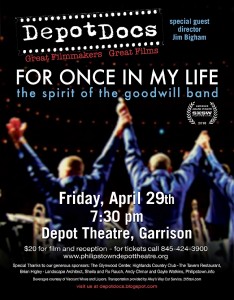 Depot Docs goes heartwarming, in the best possible, non-treacly kind of way, in its last screening of the season, For Once In My Life, which will be held at the Depot Theatre this Friday, April 29, at 7:30 p.m.  Director/Producer Jim Bigham and Editor/Creative Director Amy Foote will be in attendance. For Once In My Life is a documentary about a unique band of singers and musicians, and their journey to show the world the greatness—and killer soundtrack—within each of them. The film begins as the band has begun to venture out into new venues. The band was conceived and began playing music in 1996, within the walls of Goodwill Industries of South Florida, where all members are employed. The band members have a wide range of mental and physical disabilities as well as tremendous musical abilities.
In a cinema verití© style, the film explores the struggles and triumphs, and the healing power of music, as the band members’ unique talents are nurtured, to challenge the world’s perceptions. Their personal stories are filled with setbacks, victories and—ultimately—growth as individuals. The band members offer inspiration and the message of music’s nurturing powers for people with and without disabilities. The band proves to be an important life lesson of hope, courage and trust in humanity for all members and audiences alike.
Intercut between concerts and rehearsals, individuals are revealed.  Among several spotlighted members is Terry, the blind and damaged lead singer/saxophone player who was dropped at 14 months and never fully recovered mentally and physically, but definitely emotionally, as he is one of the most inspiring, positive persons alive. Another member, Christian, has autism and is blind, is an incredible pianist. Although with a slight stutter, he eloquently describes his wishes to become a famous musician where the whole world will hear him play.
Spirit of Good will is not an ordinary band. Their unique challenges left the producers and director wondering, up to the last minute, whether a professional stage performance could actually be pulled off. With ongoing filming of the complications of getting through rehearsals, interviews, and the tensions of the build-ups and trials, the story takes shape.
Director Jim Bigham previously produced SweetLand, for which he received the 2007 Independent Spirit Award for best feature. Other feature film credits include Great Expectations, Jeepers Creepers, Bad Boys, and Body Heat. Some of his documentary credits include Grammy- nominated, Chasing the Dream.
The screening will be followed by a reception with the filmmakers. Tickets are $20 and can be reserved by calling the Depot Theatre box office, 845-424-3900.