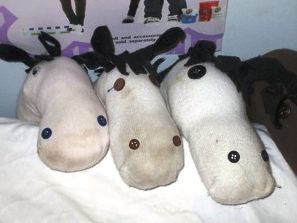 It’s a bit of a dog and a pony show over at the Hemberger household.  And, with apologies to the canine, there’s no contest as to who stands out in the show ring: it’s the pony, or ponies to be more precise. Ponies made of the mundane (socks) coupled with found objects (river sticks) and a haberdashery’s worth of notions — and turned into the very extraordinary: Little-Stick Horses, by their inventor, nine-year-old Raina Hemberger. 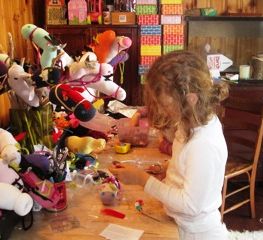 Raina Hemberger putting ponies together in the workroom

Philipstown.info  went to Little-Stick Horses’ hub of manufacturing (a room off the living room) to interview this inventor/entrepreneur.  With that special kind of empire-building dedication mixed with fervor, Raina was able to answer questions while expertly assembling more of these in-demand equines.
“A long time ago” [when Raina was four or so], “I had a Hobby Horse named Ribbons and she broke her stick and got a lot shorter. So, I put in a Lincoln Log instead. I could see that the shorter sticks actually worked really well. So my mom [Hope Turino] and I got this huge sock and we made our own horse.”  On Raina’s fifth birthday, a few girls came over and they decided to make their version of Hobby Horses.  As they didn’t have any big socks lying around, they used smaller ones, and “played and played,” says Turino.

“I really love horses.  Really, really love them.  I found this one horse on the computer, and I want to get him so badly.” Raina’s dream horse is named Funny Face; he is a 3-year-old American Quarter Horse.  Raina’s parents have done the math and figure that it would cost about $5,000 on average per year to buy him and board him. Thinking cap put on, (in this case the thinking cap probably looked a bit like a jockey’s cap) and voila, the idea of making “Little-Stick” horses and selling them to raise funds to buy a real horse came to be. Raina’s friends loved the idea and a whole gang of horse-loving girls convened at the Hemberger house, crafting the horses. 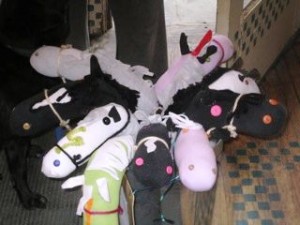 A basketful of Little-Stick Ponies at Country Goose

Raina’s first thought was to set up a stand outside her Village home, but when she and her friends took the newly-made horses outside “to ask people if they liked them”¦everybody liked them!  So we decided to take them to our local stores.”  They took them first to Country Goose, where, soon after being put on displayed, 16 of them sold, and then to Art to Wear and Payning by Caryn.  The horses, which generally sell for between eight and ten dollars, depending on size, are a bonafide hit!
Hope Turino says that “Things have turned out really well.  With the short sticks it makes them easier to ‘ride’ because with the longer sticks they constantly knock over jumps. Also, kids are less likely to trip over these.”  Raina’s younger sister Matisse proceeded to demonstrate this hypothesis by galloping through their backyard like an Olympic steeplechase champion, expertly navigating through obstacles and jumps and keeping her time down with her quick flight (no penalties) through expert handling of her Little-Stick horse. 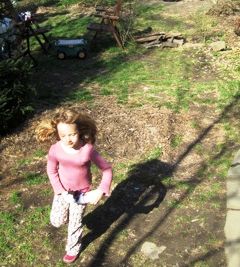 Now, the fine-tuning has begun.  “They’re getting cuter and cuter,” says Raina.  Thinking of the male market, (or for girls who are into these things too) they have come out with gladiator horses, and they’ve made a medieval horse for Philipstown story-teller Jonathan Kruk to use, because most stories need a horse or two, right?  Expanding and breaking boundaries, they have now created a Little-Stick Platypus (no, Raina is not seeking to purchase and care for that Australian creature — at least not yet”¦), and surely there will be other Little-Stick creatures to come.
Children are letting their imagination romp with these horses, naming them and creating horse scenarios, from horse shows to racing competitions and anything and everything else.  Plus, connecting the world of imagination to the terrain of technology, all Little-Stick owners can brag about their horses and show them off through social media: see https://www.facebook.com/#!/pages/River-Runners-Little-Stick-Horses/162172647173691  (and be sure to click onto the video on the page showing the Little-Stick riders in action on Main Street).
Raina’s printed tag, which tells “How Little-Stick Horses came to be” says, “When you have taken your horse home, please give him water and oats.  After you have named him/her you can photograph him and post him on Little-Stick Horse Facebook page so all of us Little-Stick Horse owners can share our horses.  I like to ride mine down the sidewalk and over jumps that I make from anything I can find.  Thanks for giving your Little-Stick Horse a good home.”
As May beckons, it will be interesting to see if any of the Little-Stick horses threaten for the Triple Crown.  Judging by recent weather, if any favors muddy tracks, it might be a winner. Maybe Philipstown can come up with its own racetracks for these thoroughbreds — something I would wager, so to speak, that Raina and her friends have already come up with, no doubt.
Shop local for local: find your very own River-Stick Horse at one of our fine Main Street emporiums.
Photos by A. Rooney