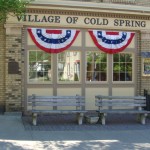 Money matters dominated a tranquil and relatively brief workshop session Tuesday (April 26), when the Cold Spring Village Board formally adopted its $2,872,006 general budget for 2011-12 and launched a composting project to provide more green stuff to village coffers and residents’ gardens alike. After weeks of effort and a public hearing on April 7, the board approved its main operating budget for the upcoming fiscal year, which begins June 1, as well as separate budgets of $857,850 for the water fund,  $485,400 for the sewer fund, and $65,570, for the pensions or deferred compensation due firefighters through the Firemen’s Service Award. The general fund budget involves an overall increase of .7 percent from the 2010-11 budget, which translates into a 1.03 percent hike in the “rate per thousand,” the rate charged for each $1,000 of a home’s assessed value. Anticipated tax revenue accounts for $1,404,844 of the overall $2,872,006 general fund budget. In the cases of all the budgets, the final bottom-line amount is the same as that given on the recent tentative budget breakdown, provided the public before the April 7 hearing. [See Draft Village Budget Draws Comments on Repairs, Maintenance, and Garbage,]        Although the board votes on the water and sewer budgets and the firemen’s service program were unanimous, a split occurred on the vote for the general fund budget. Mayor Seth Gallagher and Trustees Bruce Campbell and J. Ralph Falloon voted to adopt it, but Trustees Airinhos Serradas and Chuck Hustis voted against it. Answering an e-mail asking about his opposition, Hustis said Thursday evening that he rejected the budget because “I believe that we should have tried to lower the tax increase” and he thinks “government needs to do more with less” and not continue to tax residents to the point where it makes their lives harder to even afford the basic essentials. We are living in a time where more people are losing jobs, unemployment is increasing, people losing their homes and what is the government doing to help? Nothing, except to ask taxpayers to stomach another tax increase and just roll with the flow.” He said he wants to see attention on finding “better lines of revenue for the village, meaning possibly parking meters, etc.” Serradas did not reply to a request for the rationale for his vote.
During budget discussions April 5, Serradas and Hustis had both questioned plans to increase the mayor’s salary by $2,500 to reflect his role as village budget officer, though on that occasion Hustis subsequently voted with Gallagher, Falloon and Campbell to allow the increase, effective as of the 2011-12 budget. According to Village Accountant Ellen Mageean, the total compensation for the mayor will be $12,660, consisting of his base salary and stipend as a committee chairman and the $2,500 budget officer pay.  The detailed, printed copy of the budget lists $9,120 as the mayor’s base salary, $2,500 for the budget officer’s pay, and $1,041 for committee chairmanship stipends — also earned by trustees who chair committees. [A salary sheet distributed on Tuesday night erroneously listed $10,121 as the mayor’s pay, augmented by the $2,500 budget officer stipend.] Each trustee receives $7,300.
Unelected village staff members generally get more, especially those in full-time jobs. Under the 2011-12 salary schedule, the water and sewer superintendent will draw $95,000, with $55,000 of that earned in running the water department and $40,000 for overseeing the waste-water or sewer department; the highway foreman will receive $75,000; the accountant will earn $53,045, and the village clerk-treasurer will get $45,655. 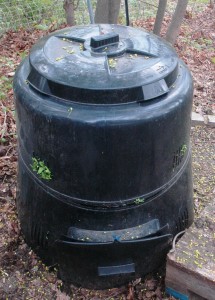 An Earth Machine composter turns kitchen scraps into a garden boon in a Cold Spring backyard.

The board decided to buy 100 Earth Machine composting bins, at approximately $37 each, and sell them at or near cost to residents as a way to reduce household garbage and village expenses in hauling it away. The bins would be identical or similar to those sold a few years ago by the Cold Spring Farmers’ Market. Mayor Gallagher said he had acquired one and attested to its virtues. “It makes my garbage a whole lot lighter.” Nor, he said, does it attract flies or other pests. “Mine has never attracted animals and it makes nice soil.”
Each composter comes with a smaller covered bucket which the homeowner keeps in the kitchen to collect food scraps and similar materials, even dryer lint, before transferring the detritus to the outdoor composter. “It removes at minimum 500 pounds from the garbage stream per household. It’s about $20 savings per year” per household in waste removal and in some cases could net even more, the mayor said. With 100 households a year using a composter, “in four years, that’s $10,000 saved.” He noted that that the village would sell the composters to residents at a lower cost than they would pay at a store, producing savings there, too.
“I would be inclined to buy one from the village,” said resident Stephanie Hawkins, adding that she already is the happy owner of one Earth Machine. “It was a birthday present.” Gallagher noted that to go along with his Earth Machine, he had bought a stainless steel sink scrap bucket that similarly “was my birthday present.” When it comes to valued gifts, Bruce Campbell joked, “it sounds like this is going to replace socks and underwear.”
“It looks like a nifty machine,” Trustee Hustis declared.
“I think it’s a good investment,” the mayor concluded. His colleagues clearly agreed, approving the composter purchase on a unanimous vote.

Main Street movie making
Taking up a finance-related issue, the board set fees for filming in the village. Two separate media companies plan to film in Cold Spring on Wednesday, May 4. The board agreed to charge one, working on a production called My Brother, $2,000, for filming at the Tots’ Park and around the village hall, between 7 a.m. and 7 p.m. The second firm, Magical Elves, intends to use the bandstand and Main Street, for a charge of $750, plus a fee for whatever police assistance is needed. Magical Elves, producer of Top Chef and Project Runway, is creating Work of Art, a TV show featuring artists, to air on Bravo in October. The board also approved a $500 fee for Taunton Press for a still-photo shoot on Main Street and at the waterfront April 27 and 28; Taunton plans a book on knitting. The village recently received yet another request for filming, for a history-documentary at the Grove, the circa-1853 derelict house, on the knoll across from the Foodtown plaza, built for Dr. Frederick Lente, West Point Foundry physician. A letter from Magical Elves perhaps explains the village’s appeal. Her company wants to bring artists to Cold Spring, Production Manager Kyra Vogt wrote, so they can “draw inspiration from a small, home-town, Norman Rockwell-esque ambience.”
Photo by L.S. Armstrong

One thought on “Village Board Adopts Fiscal 2011-12 Budget”