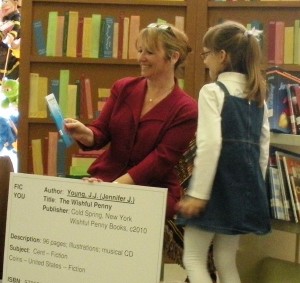 Inspiring reading through an interactive musical: Lost in the Library

Making the transition from being read to, pulling picture books from library shelves, to going in, locating where that funny number might be and successfully borrowing a volume can be a little intimidating for elementary-age students.  The intimidation is removed through Lost In The Library, an interactive musical which will be presented by Cold Spring resident and educator/ artist, January Akselrad on Sunday, May 1, at the Desmond-Fish Library.  This free program will begin at 2 p.m. The 50-minute performance will be followed by a meet & greet with Ms. Akselrad who will sign copies of the Lost In The Library CD and Guidebook.
Lost In The Library teaches elementary school children all about how a library works and inspires reading.  The catchy musical numbers include “Mr. Dewey Blues” (Call Numbers and the Dewey Decimal System), “Everyone’s Life Is A Story” (Biography and Autobiography), “A Guessing Game” (Fiction or Non-Fiction?) and “Please Bring It Back” (Library Cards and Circulation).
Akselrad has written over 125 curriculum, literature and ethics-based plays and musicals which serve to educate and empower children. Her performance credits include singing opera, cabaret and musical theater in countless venues in New York and around the world.  She has sung the national anthem at Giants’ Stadium and opera at Cami Hall in New York City.  As a composer and playwright, Akselrad believes that “what children learn through theater, they never forget.”  As an educator, she worked for eight years to build a curriculum-based theater program at a New York City private school; a program which has now been duplicated by other schools.
Lost in the Library was first performed in 1994 as a benefit for elementary school libraries in the Bronx.  When produced in 2010 by See The Wish Onstage, a company formed by Akselrad and fellow Philipstown resident Jennifer Young, the musical was updated to reflect new library technologies and resources such as the online catalog, and was released as a CD with follow-along guidebook set.  Libby Pataki, former first lady of New York and recipient of the Alice Curtis Desmond Award for contributions to children’s literature and literacy, says, “I only wish my own children had had a learning tool such as this book and CD.  It is simply the very best in education in our technologically sophisticated world.”
For more information, visit www.seethewish.com or contact the Desmond-Fish Library at 845-424-3020 or http://dfl.highlands.com/.

One thought on “Children’s Musical Teaches All About The Library”