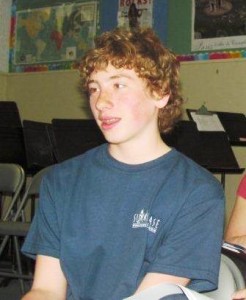 I feel I can make a difference

Local government meetings – whether hosted by a village, town, county or school board, are by their very nature bureaucratic and more-often-than-not routine – if not tedious. It’s just the nature of the beast. Such meetings are usually dominated by agendas, minutes, resolutions, budgets and conflict over how to best solve the issue of the week. But every once in a while something surprising happens that goes right to the heart of why such meetings are held in the first place. That was the case at the April 26, 2011 Haldane Board of Education Workshop. The surprise came in form of a message, delivered, not by an elected trustee, a member of the administration or even a teacher. It came from none other than a sixth grade student, one Andrew Platt.
Platt, a member of Boy Scout Troop 437, began attending Haldane meetings a few months ago in order to earn a merit badge in communications. “I started coming to these meetings because I had to,” a vey candid Platt said as he addressed the school board. His obligations had been met for earning the badge, but he requested to speak because he had things to say; things that residents and tax payers may want heed. “I came to the first meeting expecting it to be boring. To my surprise I enjoyed [it]. I found it fascinating. I left the meeting wanting to learn more,” he said. What he learned was that there is much more to a school than what happens in the classroom.

What Mr. Platt had to say

On the budget: “Every single thing we do in this school has an effect on the budget. The school has so many needs and yet there is only so much money to spend.”

On sports facilities: “I knew that Haldane didn’t have enough fields, but I didn’t know how big a problem it was.”

On transportation: “I was surprised how much having buses costs the district.”

On being informed: “”¦even if you don’t understand everything”¦at a meeting, there is a way to get answers or more information.”

On his role: “I feel I can make a difference.”

On the future: “I think that I will continue to come to board meetings when I can.”

What wasn’t surprising was the applause Pratt received at the end of his brief presentation. Board president Dave Merandy commended Pratt and vice president Joe Curto remarked, “When the going gets tough”¦we’ll call you!” Trustee Gillian Thorpe said what was probably on the minds of everyone in the room; “If only all the adults understood that well.”

The pubic referendum on the proposed 2011-12 Haldane budget, which is available on the District website, will be held on May 17, 2011. Clerk Katherine Marino announced that registration will be held on May 10 from 4 pm to 8 pm in the lobby of the Middle School for residents who have not yet registered to vote. This year’s election will lack drama to say the least. Merandy is running unopposed for president with no trustee positions up for election.

Elementary and Middle School principal Maggie Davis and High School principal Brian Alm updated trustees on improved services available for students in the areas of social/emotional and academic counseling. A team of five now provides psychological, guidance and social work counseling to students in K through 12. In addressing the team Merandy said, “I admire you guys greatly. This entire section needed to be shored up – we needed help. Kudos to the administration for their guidance. I hope you can keep the enthusiasm up. You have a huge impact.”

Principal search nears an end
Superintendent Mark Villanti reported that the search for a new principal to replace soon-to-retire Maggie Davis is coming to a close. Two finalists visited Haldane on April 28 and Villanti said that he hopes to make a hiring recommendation at the May 17 meeting. More than 200 applications were received, which were then narrowed to 14 semi-finalists before the final two candidates were determined.

Textbooks a challenge in NYS?
Davis presented a recommended text for fourth grade social studies, pointing out that acquiring the books in New York State is not as easy as one may think. “New York is one of the few states that does not require all districts to use the same text” Davis said. As a result the big publishing companies don’t produce a text that covers New York Sate history. The recommended text is published by Harcourt and is also used at the Garrison Union Free School. If approved by the Board, 70 of the books will be acquired at a cost of $60 each. “You may be looking for my replacement but I’m not going to stop begging for money” Davis quipped. 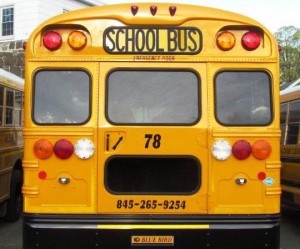 Bus replacement
The May 17 budget referendum will include a proposition to spend up to $100,000 to upgrade Haldane’s buses and vans. Director of Facilities Wayne Robinson presented a detailed breakdown of the long term replacement schedule for the district’s fleet. Robinson pointed out that in areas such as Putnam County where salt is used on area roads, the lifespan of buses is as much as five years less than in areas where salt is not needed.

Healing and preventing athletic injuries
A trainer is now available to Haldane student athletes.  Director of Athletics Tom Cunningham said that the trainer will be on campus once a week this year and twice a week next year to work with athletes to help them avoid or recover from injuries. The service is offered free of charge by Orthopedic Associates. 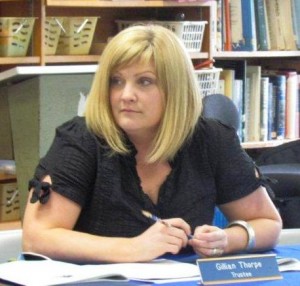 Thorpe honored
Gillian Thorpe, the newest trustee on the Haldane Board, was presented with a New York State School Board Association Achievement Award, recognizing her completion of mandatory courses required of all trustees by the State.

BOCES budget passes
Trustees voted to approve the Putnam/Northern Westchester Board of Cooperative Education Services (BOCES) 2011-12 budget of $8,444,265. All districts in the region must approve the budget in order for it to be adopted.
Photos by M. Turton