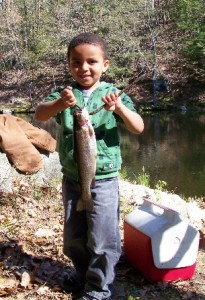 On a brilliant, balmy May 1, Philipstown youngsters of all ages enjoyed the simple and time-honored pastime of sitting around a water hole, poles in hand, waiting for a fish to bite on their baited hooks.  The occasion was the 22nd annual Anthony Savastano Memorial Kids Fishing Derby, an event proudly organized by the 56 members of the Nelsonville Fish and Fur Club, a group first established in 1895. 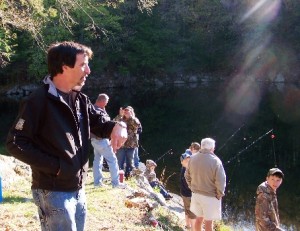 Between the hours of 8 a.m. and 4 p.m. children and their adult escorts, which included parents, grandparents and at least one great-grandparent, arrived at the Cold Spring reservoir on Fishkill Road to briefly register at the club’s tent and then go off to pick at good spot around the pond.  On the day before the club had stocked the water with $1,200 worth of trout. Newcomers to fishing were supplied with fishing rods, bait and friendly instruction. All visitors were offered hot dogs, pizza, coffee, soda and doughnuts.  The event and refreshments were free of charge made possible by club members, the Town of Philipstown, the Village of Nelsonville and a bevy of local merchants.  By day’s end 93 children had signed in to fish.
For Mike Savastano, club president, the day carries special meaning–it’s named after his deceased father who held the first event in 1989 with only a few participants on a rainy day. “He started it, he’s the one who went around and haggled the local businesses to contribute, so I’ve made it my pet project to keep it going,” said Savastano.  It’s a good community family day, it’s for the kids, people look forward to it every year,” he added. 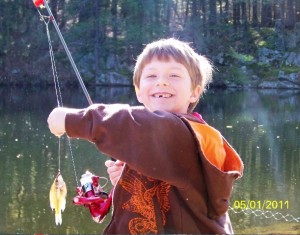 Around the reservoir one could see isolated groups of two or three adults and older children displaying studied patience and quiet demeanors as they contemplated lures and the habits of fish.  Elsewhere slightly larger groups of neighbors with younger children shared a mutual interest in developing fishing and socialization skills for both children and adults. Here and there errant hooks snagged in tree branches during attempts at casting.  And once in a while a rod was dropped when a fish eye came into view at the end of an otherwise successful strike.  Mostly there were smiles, shouts of glee and an abundance of warm feelings.
No fishing day would be complete without prizes and Fish and Club members were generous in creating many winners. The most important award of course was for the largest fish caught, which was won by one of the youngest participants, four-year old Elijah Corless.  He brought in a 14.5-inch trout and was awarded a one-ounce silver eagle coin.
Photos by Dianna Frisenda

One thought on “A Beautiful Day For Fishing And Making Friends”