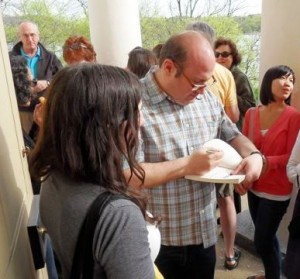 Sam Lipsyte reads from his novel The Ask

This year’s Sunset Reading Series, held at the Chapel of Our Lady Restoration, began its third season with a reading from celebrated New York City novelist Sam Lipsyte.  The author, whose work has twice been cited with the New York Times annual Notable Book designation, read sections from one of those novels,  The Ask, a deeply satiric examination of a man’s life as a not very successful university fundraiser, father or husband, among other things.  Standing with his hands grasping the sides of the chapel’s lectern, Lipsyte wryly declared “I feel like I want to tell you you’re all sinners,” a concept the audience of about 50 visitors and local fiction enthusiasts readily embraced.  Lipsyte’s prose, which contains enough acid and other caustic elements to almost require a warning label, when combined with his understated delivery, brought much laughter and the occasional ache of recognition and even queasiness to his audience.
On family: “Still, Maura was a devoted mother, which, even if that often amounted to being helplessly present for the ongoing thwarting of a child’s heart, meant something.  Bernie was a beautiful boy.  Good thing, too, as he’d become an expensive hobby. Preschool, preclothing for the preschool.  Then there were the hidden costs, like food.  Funny, isn’t it how much you can detest the very being you’d die for in an instant?  I guess that’s just families.  Or human nature. Or capitalism, or something.”
On the job market: “The interviewers could maybe tell I had the old brain.  Jobs weren’t about experience anymore, just wiring.  Also my salary demands might have been high.  I lost out to kids who lived on hummus and a misapprehension of history, the bright newbies bosses exploit without compunction because these youngsters are, in fact, undercover aristocrats mingling with the peasantry, each stint entered on their resumes another line in the long poem of their riskless youth.”
Before and after his reading Lipsyte expressed appreciation of the Chapel and its riverfront location as a setting for the event, which was presided over by Sunset founders, Ivy Meeropol and Rebekah Tighe.
Preceding Lipsyte to the lectern was Molly Tolsky, an MFA candidate at Sarah Lawrence College, who read one of her short stories, a droll, witty tale about a woman’s hesitation to commit to a relationship she might have already committed to.
As is the custom at the Sunset Reading Series, wine and cheese were provided on the portico, this time courtesy of Fresh Company.  The series, which offers free admission, is funded in part by a grant from the New York State Council on the Arts, administered by the Putnam County Arts Council. Mary Gaitskill, another highly respected novelist and short story writer, is scheduled for June 5 at 4 p.m.
Photo by K. Foley