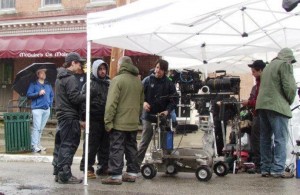 Setting up in front of McGuires

Film crews picked a soggy day to shoot in Cold Spring as the village played host to both a television series and a movie on Wednesday, May 4. Bravo TV was in town, filming for the second season of an artistic competition series, Work of Art. Artists, each paired with a camera man, sought out “locals” to show them life on Main Street. One of those interviewed was Mandy McGuire of McGuire’s on Main. The series is part of the Emmy award winning Magical Elves series which is produced in association with Sarah Jessica Parker’s production company Pretty Matches. 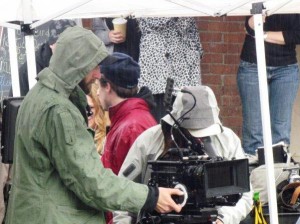 Director of photography adjusts the camera

Also being shot on Main Street that day were scenes for the feature movie Our Idiot Brother which stars Paul Rudd. The film, directed by Jesse Peretz, actually debuted at the Sundance Film Festival earlier this year under the name My Idiot Brother.  Police were on hand to assist with traffic as the crew worked its way down Main Street. Pedestrians were sometimes asked to wait or take detours while the cameras were rolling – although the mail man was allowed to continue his rounds. Tents were set up to facilitate shooting under the rainy conditions and then were quickly taken down and moved to the next location.
Local residents were intrigued by the activity and several shop keepers could be seen watching from their stoop as shouts of “Quiet!” and “Action!” were heard up and down the street. Filming took place at Cathryn’s Tuscan Grill, in front of Philipstown.info at 69 Main St. and on the lawn of St. Mary of the Highlands Church. Attempts to shoot additional footage at the gazebo were scratched due to heavy rain and wind.
For the Village of Cold Spring, which adopted the pursuit of new revenue sources as one of the objectives in its new Comprehensive Plan, the two film projects will add $6,000 to its coffers.
Photos by M. Turton

One thought on “TV and The Movies Come to Cold Spring”