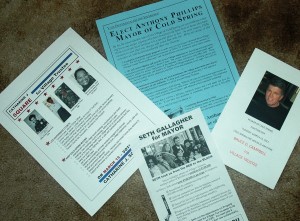 Contenders in the Cold Spring March 15 village elections collectively racked up about $11,000 in campaign expenses, according to financial disclosure forms they filed, with individual candidates reporting outlays that ranged from more than $5,000 to little or nothing.

In her State of New York Board of Elections Disclosure Statement, Catharine J. Square, who received 361 votes in her bid to become a village trustee, listed expenses of $5,578.54. Mayor Seth Gallagher, re-elected with 547 votes, was the second-biggest spender, with $3,920.33, detailed in his statement. Friends of Anthony Phillips, supporting former Mayor Anthony Phillips, who got 371 votes, spent $1,420 on his attempt to defeat Gallagher.

Trustees Bruce Campbell, the highest vote-getter at 649 votes, and J. Ralph Falloon, with 631 votes, did not file full statements and said they spent far less than $1,000.  Falloon, in fact, said he spent nothing at all. Both filed a waiver called a Claim of Exemption. A waiver spares candidates who spend and receive small amounts, such as village candidates spending less than $1,000, from having to provide comprehensive financial reports.

Overall, Square reported receiving $5,585 in contributions, which left her with a campaign-coffer balance of $6.46 after expenses. Gallagher ended up with $3,622 in donations, leaving him with a deficit of $298.33. Phillips’ campaign took in exactly what it spent. The campaign expenditure totals reflect both cash outlays and costs borne by candidates’ supporters who provided in-kind contributions, such as donations of professional services or goods.

The New York State Board of Elections Campaign Finance Handbook, which outlines state election law, says that “all candidates and/or their committees must file the election reports for all elections in which the candidate’s name appears on the ballot.” Direct contributions — those not considered in-kind — to Square, Phillips, and Gallagher tended to come from friends in the village and Philipstown.

Two political figures are reported as making donations: Legislator Vincent Tamagna, who represents Philipstown in the Putnam County Legislature, contributed $350 to Square’s campaign and Richard Shea, the Philipstown supervisor, contributed $25 to Gallagher’s. New York State law restricts an individual donor to a set amount per candidate, although the formula can get a bit complicated. When the donor is not a member of a candidate’s family, the maximum is “$0.05 X enrolled voters in candidate’s party and district, but at least $1,000 with a maximum of $50,000,” according to the New York State Board of Elections Campaign Finance Handbook.

Determining the smallest donation given in the Cold Spring election is difficult, since the waivers do not require enumeration of donors or amount and the Phillips campaign lumped together $170 in small contributions, each less than $99. A firm, Marketing Works Now, an advertising agency on Main Street in Nelsonville, proved the biggest recorded donor, with $3,500 as an in-kind contribution of promotional services to Catharine Square.

The Marketing Works president, Marshall Mermell, also gave Square $50 separately as a monetary contribution. Mermell and Square did not respond to an inquiry about how the $3,500 in-kind contribution relates to the maximum limit and New York State law. (Square also paid Marketing Works $826.20 for a campaign event and the Friends of Anthony Phillips paid $321.76 to M.K.P Work Inc., an apparent reference to Marketing Works under its abbreviated name of M.K.T. Works, for campaign literature.)

Much of the candidates’ spending went to local businesses, including the Putnam County News & Recorder for advertising; Foodtown grocery; Grey Printing; Cold Spring Depot and Foundry Cafí© restaurants; Go Go Pops, and the post offices in Cold Spring and Garrison, as well as Marketing Works. Gallagher bought door-hanger supplies from a Print Place.com, based in Arlington, Texas, and Square spent money in Dutchess County at Staples, the post office in Beacon, Dutchess Pro Print in Wappingers Falls, and Wal-Mart as well as at Party Stop in Westchester County.

The state election handbook says the law “was en-acted for several public policy purposes, including ensuring transparency of election funding,” which “enables the public to be informed on who is raising or spending money in connection with the nomination for election, or election, of any candidate.” It also allows the public to see who is contributing to the candidates.” The law directs candidates or their campaigns incurring expenses of more than $1,000 to file three reports, the first in February (either 32 days before the election, according to the New York State Board of Elections, or, for 2011, on Feb. 14, according to the New York State Conference of Mayors and Municipal Officers); the second 11 days before the election, or March 4 this year; and the last 27 days after the election, or April 11. They deliver the statements to the village clerk.

Those filing waivers get a break on the paperwork, but a candidate who files a waiver and then spends more than $1,000 anyway must file an updated, detailed report. Square a single report, on April 1; Phillips also filed once, on April 11, and Falloon filed a waiver, on May 4. Gallagher filed three times, on Feb. 14, March 4, and April 20. Campbell filed a waiver Feb. 28 and on April 25 delivered a second waiver, both citing expenses of under $1,000.