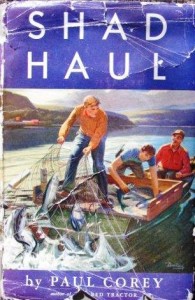 I have always found it especially intriguing when a work of fiction includes details about a place where I have lived. Maybe it is because through the infinite possibilities of fiction, a very familiar place is suddenly viewed in very unfamiliar ways. Completely new characters, events, conflicts and perceptions — all take up residence in a place I knew in a very different way.

So, I was keenly interested when Captain Chris, a friend of mine who loves to read, mentioned a novel set entirely in Cold Spring. Adding to the intrigue was the fact that the book was published in 1947. Not only was I curious about what details of Cold Spring might be included — I wondered how the village and surrounding area would look through the eyes of an author in the 1940s.

Shad Haul was written by Paul Corey and published by William Morrow & Co. of New York. I’ll admit that I was initially disappointed to learn that it was a “young people’s” novel. Still, that did not dampen my enthusiasm when the book arrived in the mail. My exact thought as I had my first look at it was, this is very cool. The colorful cover depicts two young men and a third, older man, in a large row boat pulling in a sizable catch of fish — the Hudson Highlands looming in the background. I was hooked. No pun intended. This book is about a place I know, I thought. 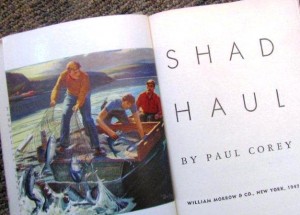 When I buy a book in person – at a bookstore, I am very influenced by the first page. If I am not won over by that page, I rarely buy the book. I eagerly dove into the first chapter of Shad Haul, hoping for the best. I chuckled when I read the first sentence which revealed that the author had changed Cold Spring’s name to “Philipsville.” It’s probably a good thing that idea didn’t surface during the Philipstown Zoning debate or the Cold Spring Comprehensive Plan process. Some people were upset enough over the possibility of reverting to the name Cold Spring-on-Hudson!

The opening sentence also includes the first of several references to places that are familiar to present day residents — although in this case it was a place that ceased to exist just a few years ago. The sentence begins, “The two boys met at the corner of the Philipsville Lumber Company” Ah, the old lumber yard. It certainly must have had stories to tell from the pre-condo era.

Other well-known places make up the book’s setting. The gazebo – or bandstand if you prefer. Constitution Island. West Point. Storm King. A bar that might be the present day McGuire’s. Breakneck is referred to as Tunnel Point.

Shad Haul is written in a style not unlike The Hardy Boys and other books of that genre, but with a little more reality thrown in. Did teenagers back then really use words such as golly and gosh? What sets this book apart from the adventures of Joe and Frank, sons of that near-perfect private investigator, is that a reader today, even an adult reader, can learn quite a bit about life during the era in which it was written, especially life on the Hudson River.

The plot is simple enough. Dick Jackson and Ralph Florio, seniors at the town’s high school — mentioned often, but not by name — decide that their best chance to earn money to pay for college lies in fishing for shad on the Hudson River. They form a cooperative, scrape together the necessary resources and set out on the river as young entrepreneurs — using Cold Spring’s — I mean Philipsville’s — main dock and the lumber yard as their base.

Every good story involves conflict and for the two protagonists it comes in the form of one Admiral Thomas J. Thegpin, a nasty guy who is not afraid to use devious means to enforce the monopoly he holds over shad fishing. The Admiral operates out of what is now the Downey dock. Not to give away too much of the plot, Thegpin is not too happy when the boys start casting their net into a river he has viewed as entirely his own. He does not take the intrusion lying down.

For someone like me, who knew nothing about shad fishing at the outset, Shad Haul provides a glimpse of what it must have involved and just how important it once was up and down the Hudson. It also underlines a rather disturbing message about how much the river has changed since that era.

Through Dick and Ralph’s exploits, Corey describes the seasonality of shad fishing — from just after break-up of the ice until May. How nets were thrown just as the tide turns in the river and that two “throws” were made daily — coinciding with the tides.  How passing freighters could destroy a fisherman’s nets — and threaten his life. How “roe” or female shad fetched a much better price than their “buck” counterparts. How physically taxing the work was. Most of all, the book gives insight into the amazing abundance of shad that the Hudson River once enjoyed.

There is little reason to doubt the story’s accuracy regarding the catch — that on their final throw of the shad season the two fictional high school seniors netted 541 roe and 39 bucks. Corey, who was also an environmentalist and journalist, no doubt did his research. He also lived in the area during what was the peak of the shad fishing industry. In 1945 close to 700,000 shad were harvested from the Hudson River — more than two million pounds of fish. By 1963 fewer than 40,000 shad were caught. In March 2010 the Poughkeepsie Journal reported that “New York state banned shad fishing in the Hudson River, citing a ‘dramatic decline’ in a species that has been part of the region’s fabric for centuries.”

Shad Haul includes some interesting messages and not just about the details of fishing — about the environment, entrepreneurism and initiative among young people, sticking up for what is right and the importance of compassion, family and friends and more. It should not be dismissed as having no value simply because  it is a “young people’s novel” that includes words such as  “golly” and gosh.”

For locals it can simply be a fun read. The December 1947 edition of The Rotarian magazine described Shad Haul as “an exciting up-to the minute story of real high school boys and girls, with plenty of conflict and adventure in shad fishing on the Hudson River.”

The book also sparked my interest in the author. Paul Corey did much more than write junior novels. Born in Iowa in 1903, he earned a degree in journalism at the University of Iowa and took his first job working for a trade paper in Chicago. While in New York he married poet Ruth Lechlitner. Pooling their resources, the couple lived in Europe for a year before moving to Cold Spring in 1930.

According to documents in the Special Collections Department of the University of Iowa, while living in Cold Spring, “Corey pursued his writing career, while he built their house, and raised chickens for profit. His farm trilogy: Three Miles Square (1939), The Road Returns (1940), and County Seat (1941) was written and published while building that house. The Corey’s only child, Anne, was also born in Cold Spring.”

In 1947 Corey moved his family to Sonoma, California, where he built another home and published “How to” books on homebuilding, while also teaching a class in homebuilding at a local college. The University of Iowa documents describe Corey as “a serious environmentalist, animal activist, and political liberal.” One of his better-known books, Do Cats Think? was published in 1980. Paul Corey died in 1992 at age 89.

Philipstown.info has one copy of Shad Haul which interested readers are welcome to borrow. It is also available online at Alibris Books. I purchased my copy on that website for about $8. The jacket indicates that in 1947 it cost $2.50. On Sunday, May 15, Riverkeeper hosts its annual ShadFest at Boscobel. Paul Corey would no doubt approve.