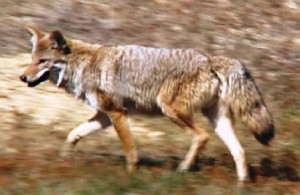 Local population appears to be on the rise

Richard Shea has lived in Philipstown all his life and is no stranger to its woodlands, trails and wildlife. But what he experienced two weeks ago while walking the Charcoal Burners Trail with his black lab took him aback. Shea had a rather dramatic encounter with a pack of coyotes. “I could hear them coming. They were making a lot of racket. But when they came over the hill”¦I said ‘Whoa.’ There were seven of them!  And they were chasing something.”  Shea said the coyotes came within about 70 feet of him as they ran past. “I admit I was a little rattled.” he said. Apparently his dog was as well. “The dog was pinned right up against me. He wasn’t going to be a hero.” Shea said he thinks the coyote population is on the rise locally. “I think the numbers are increasing. We never used to hear them that much – but now we hear them a lot at night.”
John Stowell, park supervisor at the Taconic Outdoor Education Center, agrees that distinctive night-time yelp of the coyote is heard frequently now.  “We hear them more than see them “¦one sighting per month is not uncommon. I would say the population is doing rather well.” Mike Gibbons, president of the Garrison Fish and Game Club, said that Shea’s encounter was unusual but he agrees that coyotes are becoming more plentiful. “Seven is a lot. I’ve seen them alone, in pairs and in a pack of four. From what our members are saying at the club, numbers are definitely on the increase.” Gibbons said that coyotes play an important role in local ecology. “They are the only predator that deer have – other than human hunters and cars.”  He said that coyotes typically will gang up on a weak or injured deer. They will also take down a fawn.
Many people tend to get nervous if not downright frightened when coyotes are around or the possibility of crossing paths with one is seen as a real possibility. Are people and pets really at risk? Is the fear justified? Eric Lind, director of the Constitution Marsh Audubon Center and Sanctuary in Garrison, N.Y, thinks not. “Coyotes are timid and I don’t think we need to fear them. The best thing is to educate ourselves on the wildlife of our area. If one encounters a coyote, it’s best to make a scene, shout, wave your arms around and appear aggressive.” Gibbons agrees. “If you come across a coyote you don’t want to be shy – you want to look dominant. You need to be the alpha.” Stowell also feels that coyotes are not a threat and that sighting one is something to be appreciated. “Any coyote that I have observed in the wild is on high alert and running from any human interaction.  Enjoy any encounters you may have…they don’t last very long.”

While attacks on humans are rare they do occur. A publication of the SUNY College of Environmental Science and Forestry (ESF) entitled “The Coyote in New York” states: “Although coyote attacks on people have been historically rare, this concern is not unwarranted”¦Such attacks have become more frequent”¦and have been reported in several states including New York. Attacks have primarily occurred in suburban areas where coyotes have lost much of their fear of humans due to lack of pursuit and where [there is] an easy food source such as garbage and pet food. In some cases, coyotes had been deliberately fed.” Lind says that the idea that coyotes are dangerous humans is a misconception but admits “there are always exceptions.” Even with those rare exceptions he feels that “in general conflicts with wildlife can be avoided with information provided by good science and common sense.”

But what about pets?

“We’ve had several calls at the club from people around Garrison and Cold Spring who are dealing with coyotes on their property,” Gibbons said. “They say that when they let their dog out a pack of about four or five coyotes will appear, sticking to the perimeter of the property while checking out the dog. Each time the dog is let out the coyotes come a bit closer.” In Gibbons’ view a 40-pound dog won’t be bothered by a coyote but he has some advice for dog owners. “If you’re in the woods your dog should be on a leash.” Lind also downplays the risk to pets and puts the onus on their owners as well. “I’d be more worried about a pet getting hit by a car than killed by a coyote – however small dogs and cats can be perceived as prey to coyotes. It’s up to us to limit any conflicts. Dogs of any size should not be allowed to run unattended through parks or other natural areas.”
Pet owners might also want to heed what the ESF publication has to say. “The attacks on dogs in rural areas most often occur during the coyote mating and pup birthing period — January through June — as a territorial defense behavior. Coyotes relish cats as food items.” What Lind says about cats supports that view – but with a twist.  “Cats should be inside all the time, not only for their safekeeping, but they kill a shocking number of wild songbirds when allowed to roam.”

Coyotes in New York
Adults coyotes resemble German Shepherds, are generally four to five feet in length – including their tail – and range from 35-45 pounds. Large males can weigh as much as 60 pounds. Coloring varies from blonde or reddish blonde to dark tan washed with black. Legs, ears and cheeks are usually reddish. They have a distinctive habit of carrying their tail at or below a horizontal when traveling which helps distinguish them from most dogs. They generally breed between February and June and young are born about two months later, usually in litters of five or six.
Coyote’s eat whatever happens to be the easiest item on the seasonal menu. In summer, berries, insects, and rodents are plentiful. Grasshoppers are readily available in early autumn and as fall heads into winter their diet is more dependent on small mammals. In winter, with few small mammals to be found, coyotes turn to whitetail deer — including road kill. The advent of spring means that fawns become available as a food source.
The New York State Department of Environmental Conservation (DEC) estimates that there are 20,000 – 30,000 coyotes in New York – or approximately .5 coyotes per square mile. In 2008, The Teatown Lake Reservation in Ossining, N.Y., published the results of a study, “Coyotes of the Hudson Hills and Highlands” that put the regional coyote population at 550 – 750.  DEC estimates that 60,000 New York residents hunt coyotes while 3,000 participate in trapping. Lind feels that solid, wildlife research information is the key to dealing with coyotes and wildlife in general. “It’s best to be objective. We should make decisions about wildlife through science, not myths or emotion.”
Teatown’s “Coyotes of the Hudson Hills and Highlands” provides important recommendations to help minimize human-coyote conflict in this region:

“Coyotes of the Hudson Hills and Highlands” is extremely informative and includes photos of coyotes taken on the reservation. To view the complete document click here.

2 thoughts on “Coyotes in Philipstown: is fear misguided or well-founded?”