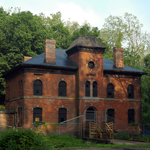 While no battles between the Blue and the Gray took place in the Hudson Valley, the region played a major role in the conflict, no place more vitally than the West Point Foundry in Cold Spring. Here workers manufactured Parrott guns, the mainstay of the Union artillery. These cannons were considered so essential to victory that President Lincoln visited the foundry in 1862.
Today the foundry’s ruins are conserved at the West Point Foundry Preserve. Walking through this tranquil, wooded ravine—which is open to the public every day—it’s hard to imagine it once was home to one of America’s most important 19th-century ironworks. In addition to Parrott guns, the foundry produced some of the nation’s first steam engines, locomotives and ironclad ships, as well as the pipes for New York City’s water system. Experts consider this one of the top archeological sites in the country for understanding the development of America’s industrial might.
Scenic Hudson will be offering tours of the West Point Foundry Preserve on Saturday, May 14, as part of New York’s Heritage Weekend. During the 90-minute walks, starting at 10:30 a.m. and 12:30 p.m., guides will share insight about critical foundry structures—from the Boring Mill where Parrott gun barrels were drilled to the Gun Platform used to test-fire the cannons. You’ll also learn about new park features that will make the foundry come alive for visitors. See this page for more details and to reserve your spot on a tour.