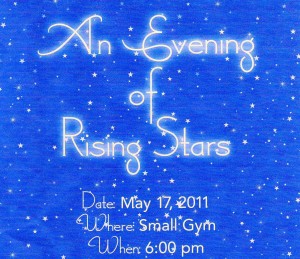 An Evening of Rising Stars honors achievements in many art forms

The days when high school students fell into neatly organized categories: jock, nerd, theater kid, have been relegated to the compartmentalized past.  Today’s lacrosse star might be found at a robotics club meeting crammed into his school musical rehearsal schedule, which he’s juggling with the demands of his AP calculus class. Haldane has long had a culture of honoring its academic stars at end of the year ceremonies, and its athletes with Homecoming and post-victory glory.  Now, in an acknowledgement that the arts are fundamentally and equally important to the lives of the students and to the life of the school as a whole, Haldane’s two-year-old Fine Arts Committee is hosting An Evening of Rising Stars, next Tuesday, May 17, at 6 p.m.
The red carpet will be rolled out (literally, on the walkway leading up to the steps of the Middle School entrance), and the paparazzi (one of them, at least “¦ una paparazza?) will be snapping away, as the luminaries in their fields (and the parents of the luminaries) arrive.  These fields include Visual Arts, Choral, Instrumental, Rock & Roll Song Writing, Creative Writing, Musical Theater and Drama.  The suggested semi-formal attire may generate some pre-show fashion buzz.  Approximately 125 attendees are anticipated, with 56 nominees, who were chosen by a panel involved with the arts at the school.
Upon arrival at the awards attendees will be able to mix and mingle, sip ‘mocktails’ made on the spot and enjoy an assortment of appetizers before the proceedings begin.  The auditorium will be set up with round tables near the stage for the students and other celebrities (administrators and volunteers) with parents seated apart, cameras at the ready. After opening remarks from Haldane Superintendent Dr. Mark Villanti, hosts and emcees for the evening Tess Dul and Christiana Glorius will take to the stage and get the evening off to a multi-media start with a compilation film highlighting theater and music at Haldane, put together by Jim Mechalakos.  Digital projections throughout the evening will display the artwork and other creative endeavors being honored.
Echoing any entertainment awards ceremony worth its salt, there will be presenters, who include recent graduates who were active in the arts at Haldane, and a “Voice of God” professional announcer heralding them and the categories.  Each award category has multiple subsidiaries, ranging from emerging to most tenacious along with accomplished and outstanding.  Every nominee will receive a “star,” akin to a Varsity “letter” which, if they are not seniors, they may add to each year, through the planned future awards.  The nominees don’t need to rehearse their speeches and acknowledge their fellow nominees and remember to include mom, dad and their agent because there won’t be speeches. A surprise is planned for the end, with the intriguing premise of “It will leave ’em laughing “¦ or crying.” The goal of the evening, according to Dr. Villanti, is to “have it be student-centered and recognize students in the fine arts. We want this to be fun, not a conveyor belt of awards, but an experience.  We’re thrilled by these kids.” 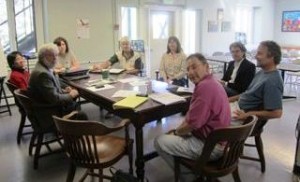 A planning session of the Fine Arts Committee

How it all began

The Haldane Fine Arts Committee was begun two years ago at the suggestion of School Board President Dave Merandy, with the goal of “promoting the arts and giving more recognition to the arts in the school.”  Merandy described the Committee’s first year as “mainly getting help for people doing the plays and musicals, as well as for Deb Contini [Haldane K-12 music teacher]. Now, we’re working on other things as well: what we need in the auditorium, developing a volunteer contact list “¦ we need help on everything, from sets to selling stuff.”  Committee member Joe Curto added “The musicals were a testing ground.  We’re now working on the structure of this group — what will work in the long run.  Eventually we will probably be independent and parent-driven, but that’s not possible now when we need the support of the staff and administration.  We have to be careful of not creating another entity similar to existing groups.”  The Fine Arts Committee will be actively seeking new members to join them in the fall, with an evening recruitment meeting planned for September. Current committee members are Seamus Carroll (chairman), Gordon Casement, Jean Cendali, Deb Contini, Joe Curto, Susan Kelly, Martha Mechalakos, Michael Mell, Dave Merandy, Gina Van Nosdall and Dr. Villanti.
The agenda for the last Committee meeting included, in addition to the planning of the Fine Art Awards, reports on an auditorium master plan; an updated arts matrix; a Middle School play update; and a review of the recent Talent Show, as well as discussions about storage of the “flats” used in stage productions and a report on recent Master Class musician visits to the school arranged by Mrs. Contini, in which local professional French Horn, Trumpet, Trombone and Percussion players visited and guided the students through the intricacies of their instruments, including warm-ups, double-time and range.
For evidence of the increased interest in the arts at Haldane, one need look no further than the April auditions for the Middle School play.  Sixty students tried out for 20 parts, resulting in double casting and, too, the inevitable disappointment for some.  Still, as Dr. Villanti noted, “This is the kind of problem we don’t mind having.” Villanti called the Fine Art Awards a way of “thanking our teachers, advisors, and community members who have elevated the level of arts at our school.”  Fine Arts Committee member Steve Sterling, a professional with lengthy experience in the entertainment industry, is assisting with many of the production aspects of these awards and is eager to do so, stating, “I climbed on this as it was rolling out of the station and I think it’s a fantastic program.  Much to the surprise of a lot of people, arts change kids in many ways and, in fact, pay off in reading, writing and arithmetic.  We want to give these kids a feeling that what they do is special. That’s why we’re bringing production values to this evening.  It’s a great thing for these kids to get acknowledged.” The ceremony will be taped and it is hoped to upload the footage to Haldane’s MSG-Varsity website,