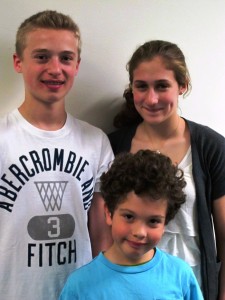 On Saturday, April 30, several Garrison School (GUFS) students competed against student entries from Westchester, Rockland and Putnam county schools at the Tri-County Science and Technology Fair in White Plains, NY.  When the judging was finished, three GUFS students were among the winners: eighth grader John Swartzwelder won 1st place in the Physics category, eighth grader Emmanuelle Palikuca won 2nd place in the Biology category and second grader Zoel Boubil’s entry received an “Outstanding” designation — the highest award available in his age group. “The level of competition is very high at this event,” said Garrison middle school science teacher, Kevin Keegan. “To place first, second or to receive an Outstanding designation against this field of competitors is really impressive. We are very proud of all of our students.”
To reach the Tri-County Science Fair, Garrison students first had to successfully compete in the annual Garrison Science Fair.  The Garrison Science Fair is judged by science experts from the Garrison community who also act as volunteer mentors while the students are preparing their projects for competition. “Our wonderful science mentors work closely with the students to stay organized and to identify ways to help them keep their scientific findings accurate,” said PTA volunteer and Garrison science fair organizer, Karen Cox.  “Having this kind of expertise and support available in our community is invaluable.”
John’s winning physics entry attempted to determine what sort of materials would make better insulators — man-made or natural.  He tested several man-made materials such as brick, cardboard, concrete, mineral wool fibers, fiberglass, polyethylene and polyurethane as well as natural materials such as wood, stone, gypsum, sand, air and vermiculite and measured the temperature differences within and outside of his enclosed chamber. “When I first started the project, I thought that the man-made materials would make better insulators,” John said.  “That was a generalization based upon anticipating that improved technology would make the man-made materials come out on top.  Ultimately my findings supported my original hypothesis.”
Emmanuelle’s biology entry focused on how human reaction differs based upon the kind of stimulus introduced to the subject — specifically, sight versus sound.  As a test group, she took ten boys and ten girls, from her class and observed their reactions to audio and visual stimulus presented on a web site.  “I found out that auditory reaction time is quicker than visual reaction time,” Emmanuelle said.  “I also tracked the results to see if there was any substantial difference in gender reaction times but there also was not enough of a difference in this study.”
Zoel turned to his love of movies for the inspiration that garnered a notice of Outstanding for his project: specifically the garbage compactor scene from Star Wars: A New Hope. The premise was whether capillary action would have helped Han Solo, Luke Skywalker, Princess Leia and Chewbacca in that situation and if the water in the compactor had been hot, would it have drained out faster.  Zoel set up a mug next to a LEGO board.  To test which temperature of water drained the fastest, he poured hot, warm and cold water into the mug and put a paper towel in to drain the water out. “I hypothesized that hot water would always win and that was right,” Zoel said.  “Hot always drained the fastest because the molecules are looser and there are more chances for the water to go up the paper towel.  Competing in the science fair was fun.  It was my first time and I did really well!”
John, Emmanuelle and Zoel were joined at the Tri-County Science Fair by Caitlin McCullough, Philip DiSarro, Samantha Barber, Stephen Suits and Solana McKee.  Samantha, Stephen and Solana were all awarded “Excellent” honors in their categories at the Elementary School level.  Congratulations to all of the students who represented the Garrison School.  The Tri-County Science and Technology Fair is coordinated by The Putnam Children’s Discovery Center, Inc.  Photo courtesy of GUFS