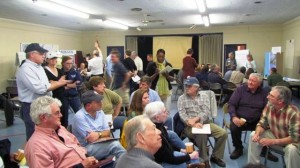 A busy Saturday (May 14) in Cold Spring did not deter residents from participating in an afternoon-long discussion of conceptual plans for three key properties located in the village: Dockside; the former Marathon Battery site; and the Village of Cold Spring truck yard located on Fair Street. About 75 people filed into the VFW Hall on Kemble Avenue and after hearing a summary of ideas included in the plans divided into three breakout groups which focused on one of the properties. 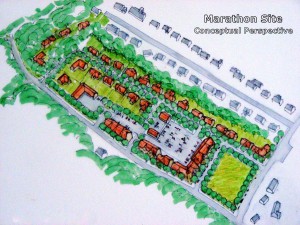 The future of the Marathon property, once the site of a battery factory that required a major environmental cleanup because of significant deposits of cadmium and other toxins, remains very much up in the air. The site is currently zoned industrial, however owner Ken Kearney has proposed a residential development of up to 36 homes. The conceptual plan presented at Saturday’s meeting was developed by Green Plan, the Rhinebeck-based consulting firm which has been assisting the Special Board for the Comprehensive Plan and Local Waterfront Revitalization Plan (LWRP) with both of those documents. That plan presented Saturday calls for a more mixed development to include residential, commercial and retail uses as well a small park at the corner of Kemble and Boulevard.  Architectural styles and street patterns would be in keeping with a traditional village layout.

In their comments residents Tom Rolston and Joe Immorlica epitomized the lack of agreement over what should happen at Marathon. “This is an industrial site. He [Kearney] can build storage sheds there if he wants to. I want something to bring taxes in – and something that is positive for Cold Spring. I don’t want just more houses. I want it to be a mini-village,”  Imerlica looked at it very differently. “We need industry. The sewage treatment system can’t handle the [housing] density suggested.” Immorlica supported the concept a low profile “campus style” light industrial development.

Kearney was in attendance and spoke after a resident asked how the conceptual plan would fit with the owner’s proposed development.  “When zoning for the lumber yard was changed from light industrial to residential I sent a letter [to the village] asking that my property be treated the same,” he said, “but I got no response.” Kearney said that he has been told all along that he would have to wait until after the Comprehensive Plan was updated before proceeding. That plan has now been completed and rests with the Village Board. “The whole process has been very fragmented,” Kearney said.

The summary of comments from the Marathon breakout group was wide-ranging. One area of agreement is that traffic and access issues must be resolved no matter how the site is developed. Completing the remediation of toxins was also listed as a priority – both Kearney’s plan and the one presented Saturday preclude development of a portion of the site due to the continued presence of toxins. Senior citizen housing, a type of development that would not impact the school system, was also discussed.  Participants also said that if a mixed-use plan goes ahead that it should complement rather than compete with Main Street businesses. Also mentioned was the possibility of creating a corridor from the historic West Point Foundry to the Foundry Museum. 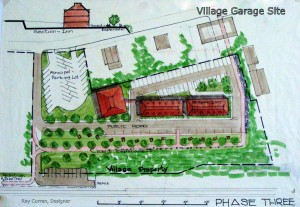 The village garage site also generated lively discussion. The conceptual plans presented call for possible development of the site in three phases, initially with little change other than adding public parking, providing river views and creating a short esplanade – with the garage and salt barn remaining in place. By the third phase the site would be completely redeveloped to include a full esplanade, increased parking, a connection to Fair Street and perhaps most significantly a 30 – 35 room inn. An alternate plan which would see the site used only for housing was also presented.

During the breakout discussion, resident Dick Turner covered a range of issues. “Traffic could be a problem if you develop a hotel. It’s not a bad idea, but it’s just something you have to look at,” he said. Turner also said that he felt the plan may be too far reaching. “I question if you can put it all that [everything included in the concept plan] in there.” He also expressed the common view that the garage should remain where it is until an alternate site is found.

The summary of the group’s discussion ran the gamut. One comment suggested that more options should be presented for the site based on ideas from the survey of residents conducted at the beginning of the planning process – including a swimming pool and ice rink. Others felt that The Riverview Restaurant should be included in any plans to redevelop the site. While some thought that an inn would raise the profile of the village as a destination while not impacting the school system, others questioned whether a 35 room inn would be economically viable. The need to tie the village together as a “unified fabric” was identified – with the railroad that splits the village in two listed as a major obstacle. It was also stated that the garage is a property that should be available for everyone’s use and that redeveloping it would be “reclaiming a village treasure. 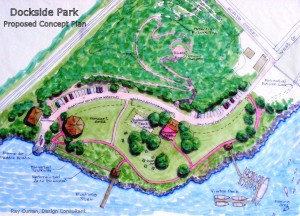 Plans for Dockside were discussed just as enthusiastically – including views eloquently expressed by the day’s youngest participants – nine-year-olds Grace Campanile and Willa Fitzgerald. The girls outlined their case for establishing a fenced dog park at the former restaurant site and brought with them a sketch map of their ideas. When debate turned to whether to establish a full scale restaurant on site or offer seasonal concession stands, Campanile had no doubt which option she prefers.  “I honestly don’t think we need a restaurant. The concessions will have good food,” she said.

The conceptual plans for Dockside include a multi-use recreation area that would provide boat launching facilities, seasonal moorings, a pavilion, seasonal concessions, trails to the upper elevations of the site and a naturalized protected shoreline. An alternate plan calls for a full-sized restaurant that would include a tent area for special events. The restaurant would require additional parking. Ray Curran who drew up the plans for all three sites stressed that many of the components of the two plans are interchangeable.

As with the other two groups, the Dockside breakout meeting produced divergent comments. However, there was general agreement that the property should be a “hub for the community.” Also strongly endorsed was the idea of expanding trails up onto the higher elevations – both to take advantage of excellent views and to better link the site to the village. There was much less agreement over the restaurant issue. Some preferred seasonal concessions while others favored a full restaurant. The potential size of the latter’s footprint caused some concern.  Participants questioned the suggested location of the seasonal moorings and suggested combining that function with the boat launching facility. Restrooms were identified as a basic need not included in the current plan. The idea of creating a sculpture park which could be tied in with Storm King was also put forward. 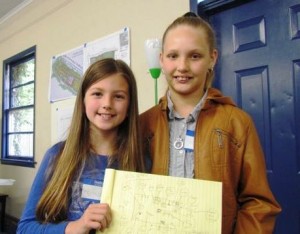 For local residents only?

After the three groups had presented their summaries, life-long resident Betty Monroe addressed the entire audience. “There are no plans [just] for the enjoyment of village residents.  I would love to see the village garage and Mayor’s park be used only by village and Philipstown residents. The waterfront is often impossible to use now. The esplanade will only pull more visitors to the waterfront – I’d like to nix that,” she said.

Earlier, as the groups were being formed, Monroe voiced her displeasure with the workshop format. “It seems like divide and conquer.” She said that everyone should discuss all three properties as one group. Mike Armstrong, chair of the Special Board for the Comprehensive Plan and Local Waterfront Revitalization Plan, the group that hosted the meeting, defended the format and said that while each group would zero in on one property, participants would also be able to comment on the other sites and that each group would report its findings to the entire audience at the end of the meeting. Monroe may have had a point for very practical reasons. The room’s poor acoustics often made it very difficult to hear what was being said as the three groups dove into what was sometimes loud, animated discussion.

Where to from here?
The concept plans for all three sites will soon be posted on the village website along with a summary of comments from the workshop. Materials will also be available at the village office. Armstrong outlined three upcoming Special Board meetings where the properties will be discussed individually: Marathon, May 26, 7:30 p.m. at the village hall;  Dockside, June 9, 7:30 p.m. at the Cold Spring firehouse; and the village garage June 23, 7:30 p.m. at the village hall. He said that the conceptual drawings presented at the May 14 workshop will not be revised until after those three meetings. “Following those meetings the Special Board will consider how the concepts should be modified in light of public comment.  The Special Board will prepare a report with recommendations that will be presented on September 17,”  Armstrong said. Throughout the workshop held at the VFW organizers stressed that the concept drawings were presented as ideas to help generate discussion and that they do not represent final plans for any of the three sites.