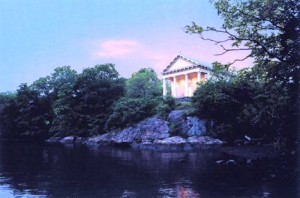 Attending a musical event at the Chapel of Our Lady Restoration feels transporting, not just in the usual aural sense, but literally too, sitting in the simple rows of pews, it is easy to imagine the musically-inclined residents of 150 years or so ago enjoying the same pursuit.  In reality, however, concerts at the Chapel Restoration are quite a recent phenomenon, occurring regularly only in the past decade or so. The Greek Revival Chapel itself dates from 1833, built originally as the first Catholic church north of Manhattan, and designed to serve the many Irish immigrants who arrived in the early 19th century and wound up working at the West Point Foundry.  It was Foundry owner Gouverneur Kemble who donated the land and monies for the construction of the church.  Music did fill the chamber early on, as a band from West Point, along with a choir, performed at the dedication ceremony in 1834.

The original design, by the very young (19 years old) Thomas Kelah Wharton was supplanted by a Victorian addition, which dwarfed the original. The arrival of the railroad meant that the Chapel was cut off from the town, and neglected, it fell into disrepair and was further damaged by a devastating 1927 fire.  After languishing for decades, in 1971 a multi-partisan group, including “a Methodist, a Lutheran, a Jew, a Presbyterian or two, a scattering of Episcopalians and a handful of Catholics,” according to the New York Sunday News, purchased the Chapel from the Archdiocese and began its restoration. The Chapel was dedicated as an ecumenical site in 1977.  In 1996, with funds from the estate of Hugh Holt, a balcony based on the original was built and a tracker action pipe organ custom-built by George Bozeman was installed. 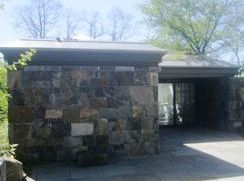 Two years ago, with grants from the Empire State Development Corporation and the New York State Council on the Arts, the Chancery, a support building to the Chapel, was dedicated.  The Chancery, a modern, green-roofed building accentuated in cut stone, was designed by Peter Smith to complement the site. The Chancery provides the Chapel with an infrastructure and amenities, including a meeting room and restrooms, while not appearing out of place.
The Chapel Restoration’s mission statement contains four goals:

Now run and maintained by the nonprofit Chapel of Our Lady Restoration, Inc., efforts are made to fulfill each of the branches of the mission, and the Chapel Restoration’s all-volunteer board members work on projects as disparate as maintaining the path up to the Chapel, repairing the portico, booking and coordinating the many weddings and special events the Chapel is home to and filling the Chapel with words and music through its readings and concerts.

Artistic Director Barbara DeSilva oversees the Sunday music series, among many other things.  DeSilva had long ago attended something musical at the Chapel and remembered the superb acoustics and when a music series was suggested (around 10 years ago) as something nice to do for the community, she piped up and said “Oh I’ll do it.” The program began with three yearly concerts, all classical, and it grew from there.  This year there are nine concerts in the series, each lasting about an hour, all on Sundays at 4 p.m., interspersed between April and November, all free, with donations gratefully accepted. Pianists have the use of an 1893 Steinway grand piano, once owned by the Livingston family, whose country estate, Clermont, was farther up the Hudson in Germantown. 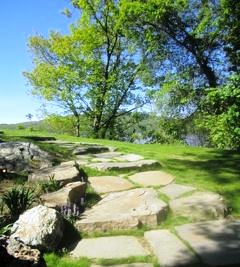 The improved pathway leading to the Chapel

Jazz, opera and world music are each represented each season amidst the classical offerings.  Locals are occasionally featured; this season Garrisons wonderfully-voiced Julie Heckert and Michael McKee will perform on June 12. Sometimes programming is more happenstance and fortuitous: a meeting with Garrison’s Clara Longstreth resulted in an appearance by her New Amsterdam Singers Chamber Chorus. Children’s concerts have also been presented, a performance of Black Bear, a Hudson Valley Tale, by Madera Vox “left a very young audience spellbound,” says DeSilva; more children’s programming is planned.

Though by necessity the artist fees paid by the Chapel Restoration aren’t the highest, the artists who appear are generally quite renowned, and they are often lured by the recommendations of their colleagues, who are delighted with the ambiance and the acoustics. An example: “We fell under the spell of its charm … playing here is a feast and a privilege,” said Kees Kooper, violinist, former concertmaster of the Netherlands Philharmonic. Kooper, who met DeSilva through mutual friends, has sent many other musicians the Chapel’s way. As DeSilva puts it, “If I’m going to present something, I need it to be the best.”  One person leads to another.  Kees led to Aaron Wunsch, who said he’d love to come back with his group.  Then last year we met Momenta through Aaron “it’s a small world at Juilliard and the Philadelphia Academy of Vocal Arts.”  Also, friends will call with news of a great young artist. Several years ago the Board invited local violinist Gwen Laster to join them, in hopes that she would expand the roster of artists to include more contemporary music, which she has. “A young artist is a good place to find young artists,” says DeSilva. In July Laster will conduct a “string academy” camp for young players on the premises. 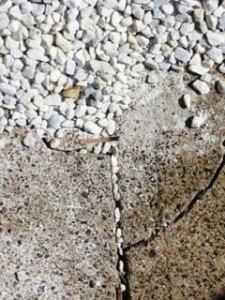 Parts of the portico floor are cracked

The physical maintenance needs of the Chapel are daunting, and, like every edifice, never-ending.  Right now the most pressing issues are the breaking up of the portico, improving the exterior lighting, and a desire for air-conditioning for the summer months and improved heat for winter.  The pathway up to the Chapel has just been re-done (for the third time) and is much safer and easier for seniors and those with walking difficulties, to navigate. The usual demands of cleaning, keeping the wood floors in good condition, etc. soak up funds.  Most of the funding is grant-based, and supplemented by donations.

The Chapel Restoration is taking small fiscal steps to augment these monies, things as simple as selling ads in their programs, seeking sponsorship for the concerts and asking for donations at the concerts.  It’s still quite difficult, especially as the revenue from weddings and special events (memorial services, baptisms, renewals of vows, etc.) has decreased during these economic times, and the funding from grants is half of what it once was.  DeSilva credits former Board President Gail Hannah for her tremendous efforts and guidance over the past decade in every possible area.

Still, the audiences keep coming. A packed room of 125 or so people turned out for the first concert in April.  DeSilva asks the artists to perform a mixed repertoire when possible, combining the known with the new. “Our audiences, they come and they are willing to hear something new in this wonderful place.  For instance, when we presented Chinese  pipa music last year I didn’t know if anyone would come.  It was full – they dared to come.”  The audience is a mix of local, regional (coming from Westchester and across the river as well as on planned visits by train from the city) with some tourists who notice the posters around town. The Chapel also hosts events which it does not produce, but even with the rentals, DeSilva casts an eye over what is to be presented, and the music “has to be of a certain quality.”
Photos by A. Rooney