Did you get your blue bin?

Raccoons in the daylight, broken streetlights in the dark, the appearance of brand new big blue recycling containers and obtaining help from external sources were among the matters before the most recent monthly Nelsonville trustees meeting held on May 16 at the Village Hall.  Mayor Tom Corless reported he has been urging Central Hudson to make repairs to several Main Street streetlamps. “They told me contract negotiations with employees had slowed service. Hopefully they will get to them in the near future; there’s quite a few,” he said. Corless also said the village would proceed to find an outside contractor to make repairs to several fire hydrants on various side streets after waiting four years for Cold Spring village officials to arrange a joint operation. “They had expressed interest in doing the work but I guess they have been so busy they haven’t been able to schedule it,” said Corless.  He said it was necessary to proceed as street repair work was going to commence and any fixes needed in and around the hydrants should be done first. 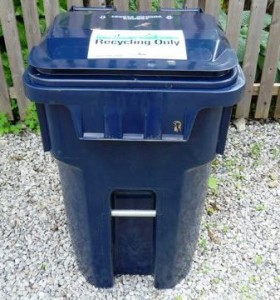 The New York State Department of Transportation (DOT) is also on Corless’ list for village service requests. He has asked the agency to sweep Main Street (aka Route 301) in time for the Memorial Day parade.  He said he wasn’t optimistic about catch basins being cleared but hopeful something would get done. Board members Corless and Trustee Ande Merante (Trustee Peter Tomann was absent) voted to approve the request by the American Legion and the Veterans of Foreign Wars to have the parade pass through the village. The parade begins at the Cold Spring Village Hall at 9 a.m. on May 30.
Merante raised a wildlife alert reporting the capture of a raccoon in a catch basin on Pine Street in the middle of the afternoon.  Since the animals are nocturnal creatures, their appearance can be an indication of illness, Merante said. “If you see a raccoon, call the DEC (state Department of Environmental Conservation) pest control,” he said.
The  board also voted to formally approve the contract terms for a previously discussed $70,000 bond to be financed over a five-year period to fund a street resurfacing and repair project on Healy Road. Corless observed that Putnam County had made a poor job of repairs five years ago and had been unresponsive to the village’s complaints. “Beware of counties bearing gifts,” quipped Merante. The work, intended to improve water runoff, will be done by the Philipstown Highway Department. 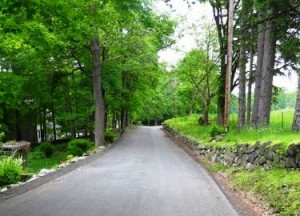 One of the sections of Healy Road where roadwork is needed to improve drainage.

The board members and Village Clerk Pauline Minners noted Royal Carting Service’s introduction of new recycling bins on wheels that allow residents to combine paper, plastic and glass items in one weekly pull to the curb.  Minners pointed out that the same recycling rules apply, but that all items can be thrown in the bin at once.  Plastic shopping and garbage bags are not permitted.  Any resident who did not receive a container can call Minners at 265-2500.
Photos by K. Foley