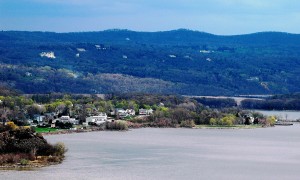 Village garage viewed from across the river

Perhaps one of Cold Spring’s best-kept secrets — in various senses — the Village Garage remains unknown to many and rarely seen even by those aware of it. On display last Saturday, though, it wowed site-seers for its sight-seeing splendors — not the trucks and road salt, but the sweeping vistas from its promontory. “It really is spectacular!” Chestnut Street resident Dick Weissbrod declared, looking out over the Hudson River. That afternoon, village officials opened the site for an hour and invited the public to stop by. Those who did seemed unanimous in their appreciation of not just the view but the potential. The site, which along with the main garage includes a truck yard as well as a barn-like shed containing a mound of salt, occupies two acres above the railroad tracks, behind the municipal parking lot and adjacent to the sewage treatment plant on Fair Street. A glimpse inside the garage showed gleaming tools, tidy floors, and a colorful collection of old signs on an upper wall. Outdoors, large vehicles lined up in readiness. 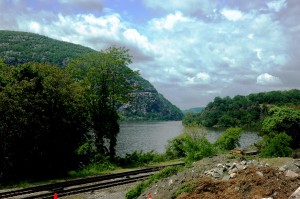 Since at least summer 2006, when efforts to create a new Comprehensive Plan for the village began with formation of an ad hoc preliminary steering group, the garage has been the subject of suggestions that the village do something with it other than store trucks and equipment there. Often, the ideas have involved some form of public park, perhaps accompanied by a small inn and other amenities. Of late, proposals have ranged from a park-like promenade to a meeting hall, bicycle-and-pedestrian path (to stretch to Little Stony Point) and housing, to continued utilization, in a somewhat reduced capacity, for garage functions. On May 14, the garage was one of three Cold Spring properties featured in a forum held by the Cold Spring Special Board for a Comprehensive Plan-Local Waterfront Revitalization Plan, seeking input from residents on possible design concepts. (The other two sites were Dockside Park, owned by the State of New York, and the privately-owned former Marathon battery factory property on Kemble Avenue.)  A week later (May 21), under the watchful eyes of Special Board members, the village held its brief “open house” on the garage property. 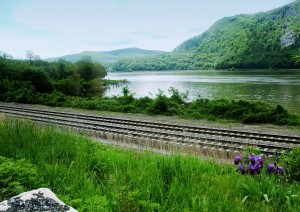 View from the garage looking south

“The Special Board is currently focusing on these three different properties,” Dockside, Marathon, and the garage, Special Board Secretary Marie Early explained. “In planning for the May 14 community forum, it became somewhat apparent many people don’t know where the village garage is and the spectacular views are from the site. So the idea was to give them a chance to see it.” The handful who availed themselves of the chance described it as well worth it. “This is a die-for location. There’s no doubt about it,” declared Pete Smith, a village resident who rode up on his bicycle. He said he understood how the magnificence of the site could get overlooked in the mundane necessities of storing salt or parking garbage trucks. “I guess it’s always tough when you take the day-to-day activity of the village and combine it with the aesthetics,” Smith said.
Weissbrod voiced similar opinions. “What a waste of space,” he said of the existing arrangement. “It’s an asset worth trying to do something with, if everyone can come to agreement.” While he expressed uncertainty about a hotel with 25 to 35 rooms, one proposal covered at the May 14 forum, he noted that “the property is much larger than you really think” and when combined with the municipal parking lot, “it’s really got more space than the two acres we’re standing on,” enhancing the possibilities. 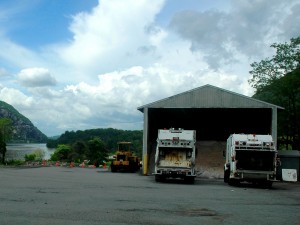 Between rain showers on Saturday, wild geese honked in the background as the yard offered a changing panorama. A schooner and paddle-wheeler glided by on the river, trains chugged past on the tracks, and a patch of irises in deep purple basked in the sun, Storm King and Crows Nest bright green above a sparkling Hudson.  A resident, who declined to give his name because of his profession as a writer, expressed satisfaction at the new interest in the property. “I’m glad the village is thinking so ambitiously,” he said. “A plan will forestall all the awful things that will happen with the absence of a plan.”
Photos by L.S. Armstrong