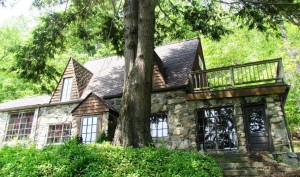 The house that Corey built (Photos by M. Turton)

Unique home part of his legacy

Earlier in May, Philipstown.info published a story about Paul Corey, author of Shad Haul, a young people’s novel published in 1947 and set in Cold Spring — although the village was renamed “Philipsville” for reasons known only to the author.

Corey moved his family to California right around the time the book was published but it seems his influence still lives on in the community.

The most obvious evidence of Corey’s continued presence is a local road that bears his name — Corey Lane, located off of Route 9 near Jaycox Road. He single-handedly built his own home on that road in the 1930s. Shortly after the Shad Haul article was published, Philipstown.info received an e-mail from the Gina Van Nosdall who, along with her family, now lives in Corey’s former home. She has a great affection for the house and has developed a keen interest in Corey, who died in 1992 at age 89.

That interest was no doubt fueled several years ago when Corey’s only child, Anne Corey, paid a visit to see the home she had grown up in. Van Nosdall and Anne Corey became friends and corresponded for an extended period of time. The author’s daughter gave Van Nosdall some of her father’s books, newspaper clippings, family photos and a wealth of first-hand information.  Van Nosdall and her husband Pat also added to their Corey book collection on their own.

Corey was a writer, but he was nothing if not determined, independent and innovative when it came to building his unique home. The house he built is beautiful, distinctive — and quirky. Van Nosdall said that 14 years ago she and her husband were perfectly happy living in Park Slope, Brooklyn, but when they came across Corey’s house they fell in love with it.

After moving in, “we soon realized how small it was — and that we would have to make lemonade out of lemons,” she said. The house features very few closets, a tiny kitchen and an equally small bathroom.

“Corey was  a bit of a socialist,” Van Nosdall said. In a self-help book he wrote titled Build a Home, Corey offers this advice to would-be homebuilders: “If you need a big kitchen and a big bathroom — you need therapy.”

The home originally featured nine rooms that were small-to-moderate in size. Staircases take interesting twists at the bottom. Van Nosdall said that there is not a square joint in the entire house. The central room — and largest room — boasts beautiful wood-paneled walls and a stone fireplace. Visible on the cement apron of the fireplace are cat paw prints and a child’s foot prints — undoubtedly Anne Corey’s.

Van Nosdall said that the fireplace was the house’s only heating system until 25 years ago. “Corey built the first energy-efficient home in the northeast,” she said. The fireplace’s “heatilator” design and the fact that the house is built into the side of a hill contributes to its energy efficiency.

Van Nosdall said that as she and her husband adapted the house to suit their needs, contractors working there all said they couldn’t imagine how the house had ever been built. “Corey was a writer, not a builder,” she said.

An extensive article about Corey published in the Sept. 21, 1941, edition of the Hudson Valley Sunday Courier described the house this way, with a comment from Corey himself: “Today, you look at the stone exterior with its many windows, or at the paneled indoors, and the many flights of steps between rooms at different levels — and you wonder how one man found the nerve to tackle such a construction job single-handed. Paul Corey smiles hesitantly, ‘Guess I started it,’ he allows, ‘because I was too dumb to know it wasn’t possible — but my father built his own house and my grandfather built his — [it’s] almost a tradition.'”

The article also states that Corey moved a thousand tons of stone in building his house. 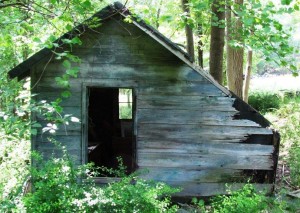 Corey and his wife raised crossbred Plymouth-Rhode Island Red chickens and sold the eggs to augment their income from writing. The 70 hens produced some 2,000 eggs a month. The chicken coops still exist, hidden in dense undergrowth. They have fallen into ruin, but display some of Corey’s flare for stylish design.

There is still writing going on in the house where Paul Corey wrote several of his books, including a trilogy of novels about the challenges of farm life in Iowa, his home state. Van Nosdall is writing a series of fictional short stories about male muses. One of the characters who will be portrayed will be a fictionalized Paul Corey. “Every day in this house I’m reminded of Paul Corey — and of how you have to think outside the box ” — muses are usually women,” she said.

Corey’s wife, Ruth Lechlitner, also a writer and a poet, may be enjoying somewhat of a rebirth locally as well. After reading about Shad Haul, Cold Spring poet Jo Pitkin did some digging and found examples of Lechlitner’s work. She thoroughly enjoyed the research.

“It was inspiring to learn about another Cold Spring poet. I have really only known George Pope Morris. It was great to find someone more contemporary. Lechlitner published three books of poetry and individual poems in fine journals of the day,” Pitkin said.

One of the books was entitled Tomorrow’s Phoenix, published in 1937. Lechlitner also wrote articles on “newsworthy figures”  for  the publication Current Biography.  Pitkin said “Song of the Starlings” was one of her favorite Lichlitner poems that she came across and that another, “Kansas Boy,” is easily found on the internet. It appears below.

This Kansas boy who never saw the sea
Walks though the young corn rippling at his knee
As sailors walk; and when the grain grows higher
Watches the dark waves leap with greener fire
Than ever oceans hold. He follows ships
Tasting the bitter spray upon his lips,
For in his blood up-stirs the salty ghost
Of one who sailed a storm-bound English coast.
Across wide fields he hears the sea winds crying
Shouts at the crows — and dreams of white gulls flying.