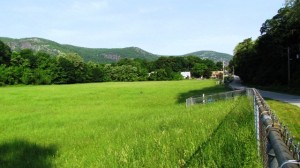 Self-storage business is his fall back position

The largest undeveloped, privately owned property in the Village of Cold Spring, 11.8 acres along Kemble Avenue, could end up the location for a few hundred thousand square feet of self-storage buildings.  That unlikely, but permissible scenario – under current zoning use – was put on the table by the parcel owner at a meeting of the Comprehensive Plan Special Board at the Village Hall on May 22.

The site under discussion is commonly known as the Marathon property after the battery factory whose poisonous discharges polluted the land and the Hudson River for years. Technically though, the “Marathon” name has been obsolete since 2003 when the Kearney Real Estate and Development Group acquired the industrial-zoned site.

Kearney’s rights and intentions, more than any other factors, will determine the property’s fate and the impact on the village. Hence, the main speaker at a meeting largely focused on the property was Ken Kearney, the head of the company. He addressed the board and an audience of approximately 25 people. 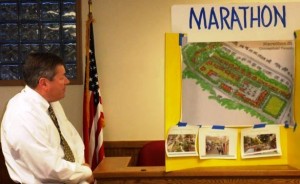 Standing before a display of the Special Board consultant’s mixed-use concept for the site, previously examined at an open community discussion held on May 14, Kearney offered his own similar perspective on the property’s potential, cautioning that most of what he had to say was “just eyewash for now.”

Declaring “the days of McMansions built individually on one-acre lots are over and in any event not in keeping with the village character,” Kearney said that “a more urban approach, as opposed to a suburban” was needed. He seemed in basic agreement with the elements of the conceptual plans that promote a clustered mix of residential, commercial and live/work buildings well spaced over the tree-lined site.  In addition, he endorsed a park-like parcel at the property’s edge closest to Main Street. “A park, a green space, creates a destination for the site,” said Kearney.

Addressing sewer and traffic concerns, which were raised at the May 14 conference, Kearney said the sewer system already in place was more than adequate for the contemplated level of development. As to traffic, Kearney emphasized the pedestrian-friendly possibilities, citing his company’s experience with senior housing as proof of a commitment to creating a walking-over-driving experience.

“If done properly this project can enhance and extend Main Street, he said.  Throughout his presentation, Kearney stressed green building tactics such as using rain gardens to capture storm water. “A village within a village,” he said more than once.

Kearney said he has had conversations with Scenic Hudson, which owns the adjoining 87-acre West Point Foundry Preserve, about preserving the bluff overlooking the river on the south end of his property. Scenic Hudson, through a letter read aloud by Special Board chair Michael Armstrong, expressed concern about any development indicating the importance of low environmental impact and maintenance of green space. Kearney said he was optimistic that some kind of tax-friendly donation of land could be worked out with Scenic Hudson.

Kearney also said he believed area property values, suppressed by the uncertainty of the site’s status as a polluted brown-field, would rise when an experienced developer completed a project that settled those questions.

At another point, Kearney said most projects that fail do so during the construction phase. “We do our own construction, we’re good at what we do,” he said.

The commercial aspects of a site could include a variety of shops offering both resident and visitor products and services, according to Kearney.  He emphasized a lower school tax impact with the live/work buildings, which would have loft space above for artisans to live with their craft shops below, unlikely to be occupied by families with children.

Kearney also tried to underscore that the development’s elements would often mirror features already present in the village by showing photographs of existing structures containing mixed uses, walkways set back from Main Street, buildings with parking in the rear as well as structures possessing the material texture and architectural detail he contemplates for the project. The condominiums along West Street on the riverfront, on a site originally zoned for industrial use, served for Kearney as an important example of the possibilities for his property.

The prospect of storage buildings came up when an audience member asked about the possibilities under current zoning.  Kearney said he has had discussions with a storage company and determined that a series of buildings with as many as 300,000 square feet of storage, including underground climate-controlled units, were possible. That much space wasn’t currently market-supported, he said, but his company could begin with a smaller project if needed.

He reiterated that this was far from his first choice but remained a fallback position. Almost the entire audience groaned in response to this possibility. 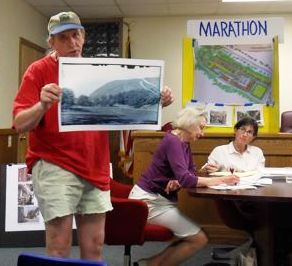 Some village residents found Kearney’s concepts, and those of the consultants, interesting and representative of new trends in American community planning. A few others declared them abhorrent. Jan Thacher passed around a photograph of the property in 1890 with cows grazing on it insisting this was how Gouverneur Kemble, the original owner, intended it to remain. Thacher questioned where the concept for mixed used came from since he said it was never discussed when he served on the relevant sub-committee of the Special Board. But restaurateur Tom Rolston rebuked him insisting he had served on the same group and that he had first offered the mixed-use idea.

Dick Weissbrod of Chestnut Street, a former college professor, said he liked the design of the project, but was concerned about the long-term impact of the pollution buried on the site. I don’t have facts, just skepticism,” he said. Kearney said he believed appropriate techniques, certified by experts, would assure safety.

Residents from the area surrounding the property generally objected to the scale of both the consultant’s schematic and Kearney’s ideas.

“The impact of this project will be tremendous. I don’t like the idea of extending Main Street into the neighborhood. We have a quiet lifestyle now. This will turn people’s lives into turmoil,” said Elliott Hammond, a life-long resident of Constitution Avenue. Randi Schlesinger, a new resident of the Boulevard, spoke for many local residents in disbelief of Kearney’s claims for minimal traffic impact. She pointed out the narrowness of surrounding streets such as Wall and Rock Streets.

“People will have cars, and they will drive places,” she said.  Schlesinger and others mocked the idea of Cold Spring as a walking village declaring people routinely drive to the Post Office and the train station, among other places. Hammond and others did acknowledge Kearney’s property rights to build something. They said they just hoped the scale would end up a lot smaller than what they saw in front of them.

Kearney expressed no urgency about submitting a formal plan for the property during the meeting. Afterwards he told Philipstown.info he was trying to be patient. “It’s obvious the process needs more time,” he said.  Relations with the village have been rocky. In April of this year Kearney lost an Appellate Division case when the village was upheld in its denial of a variance to the zoning code so he could build a private home at the site on a lot smaller than the village requires.