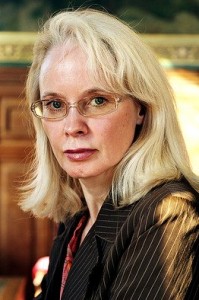 Novelist and short story writer Mary Gaitskill will read from her work on Sunday, June 5 as part of the Sunset Reading Series held at the Chapel of Our Lady Restoration. Gaitskill is the author of the novels Two Girls, Fat and Thin and Veronica, as well as the story collections Bad Behavior, Because They Wanted To and Don’t Cry.  Her story, Secretary, was the basis for the feature film of the same name.  Her stories and essays have appeared in The New Yorker, Harper’s, Granta, Best American Short Stories and The O. Henry Prize Stories.  In 2002 she was awarded a Guggenheim Fellowship for fiction.  She has taught at U-C Berkeley, the University of Houston, New York University, Brown and Syracuse University.  Her novel Veronica was nominated for the National Book Award in 2005; it was also nominated for the National Critic’s Circle Award and the L.A. Times Book Award.  She is currently a Cullman Fellow at the New York Public Library.
Readings are free and followed by a wine and cheese reception on the banks of the Hudson, with a chance to talk with the author.
Photo courtesy of Sunset Reading Series