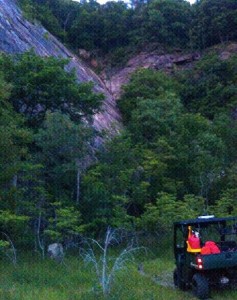 Two teenagers from Fishkill, N.Y., may be reassessing their recreational pursuits today after one of them became stranded on the rock face of an old quarry outside of Cold Spring on Friday night (June 3), a situation that threatened not only the life of the teenager but also the lives of two firefighters who eventually rescued him. Cold Spring Fire Company (CSFC) Assistant Chief Matt Steltz described the rescue as “10 times more serious” than an incident last winter when CSFC firefighters saved a seriously injured hiker from atop of Breakneck Ridge in the midst of a winter storm. He described last night’s rescue in detail to Philipstown.info.

Two brothers,  ages 15 and 18,  were “free-form” climbing on the 140-foot rock face of the old quarry located just off of the Washburn Trail that leads to Mount Taurus. In a free form climb no equipment is used to assist in the ascent. The older brother became stranded 100 feet above the ground. A CSFC firefighter later described the rock face as being on a 75-to-90 degree angle. The climber stood with his back pressed against the rock, his arms stretched out to each side to maintain his balance, his hands gripping whatever they could. His feet were spread, jammed onto crags that were much less than a ledge. Worst of all, when he found himself in that position he froze. He could not move. It would prove to be close to a 5-hour ordeal – stuck in that agonizing and perilous position.
With his brother’s life in danger, the younger teen began screaming for help. In a case of extremely good fortune, a couple from Indiana, Corey Flannery and Elise Wyat, was hiking nearby and heard the cries. At first they had difficulty pinpointing where the boys were because the shouts echoed around the quarry. Flannery, a captain in the U.S. Army’s 10th Mountain Division and veteran of two tours in Iraq, put his skills to work.  He and his girlfriend established communication with the younger brother via cell phone, gathered information and reassured the stranded climber.  They called CSFC – and included a cell phone photograph. Steltz recognized the location immediately. The fire company had conducted training on the same trail just two weeks ago.
When the call came in at 7:50 p.m., Steltz immediately dispatched a team of six firefighters. He also contacted the New York State Police and the New York City Police Department. The latter used a helicopter to rescue two cadets from the U.S. Military Academy at West Point (who had become stranded on a mountain side across the river from Cold Spring late last winter.) He also sent a second crew on a 30 minute hike to the cliff 40 feet above the stranded climber. That crew included Kevin, Nick and Chris Junjulas and Mark Ford, all of whom had taken part in the Breakneck Ridge rescue. Steltz said that the experience gained at Breakneck “worked very much in our favor” in this incident.
Led by Josh DiNardo, CSFC firefighters cut down trees near the quarry in order to prepare a helicopter landing zone. Steltz said that when the New York State Police dispatched its helicopter from Stewart Airport, along with a second chopper for support, the flight took only about two minutes. But even with trees removed the landing area proved too hazardous – in part because it was getting very dark. Instead the helicopters landed at Mayor’s Park. A large contingent of first responders gathered at Little Stony Point Park just outside Cold Spring including the Cold Spring Police Department and New York State Parks Police. North Highlands Fire Department assisted with communications. The Philipstown Volunteer Ambulance Corps responded initially but had to leave to attend to a second life-threatening situation. They were backed up by an ambulance and crew from TransCare.
The boys’ parents had been called and also arrived on the scene. Radios crackled and they could hear bits and pieces of information being passed among responders. In addition to the obvious problem of the couple’s son being stuck, rescuers were becoming increasingly aware that the climber was tiring and becoming dehydrated. “It was highly stressful for the parents,” Steltz said. Mike Bowman, a CSFC firefighter who also serves as president, and Dan Valentine, a firefighter and former CSFC chief, arrived on the scene and volunteered to climb the rock face. “We didn’t have an option,” Steltz said. “He (the climber) was getting very weak.” Bowman had climbed the quarry face once before and Valentine is qualified in use of ropes for high- angle rescues. The two made the 100-foot ascent to the stranded teenager. The New York State Police helicopter hovered close by, providing light. At one point the copter was so loud and created so much wind that firefighters had to signal it to back off. Once Valentine and Bowman were in place, the crew on the cliff above dropped additional ropes and equipment which enabled them to secure the climber. He was hoisted up to safety – unharmed but very badly shaken.
Steltz said that a number of hikers have been killed at the quarry in the past. “We’ve pulled people out of there before. I’ve done it myself. I was worried that this rescue would become a recovery operation.” Commenting on Bowman and Valentine’s rescue, he said: “It was one of our most daring. They were apprehensive. They could have been killed. “For Steltz it was anything but just another Friday night at the Cold Spring fire h. He took the original call at 7:50 p.m. “It wasn’t until 12:45 a.m. that things started to wrap up,” he said. Steltz finally slipped into bed at 2 a.m. The names of the two would-be climbers were not released.
Photo by Chris Junjulas