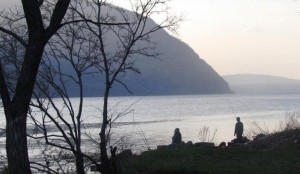 Coming soon to a seasonal theater near you: Family-oriented movies set against a magnificent backdrop that may rival anything on the screen. The newly-formed Film Society, a group of residents, intends to begin showing free family-friendly films this summer at Dockside Park. Welcoming the idea, the Cold Spring Village Board last week agreed to serve as municipal sponsor. Private donors — residents joined by representatives of the business and non-profit sectors — are supplying a projector, large-scale screen, and other assistance. That means viewers need only bring their blankets and popcorn.
At its May 31 workshop, the Village Board also reacted favorably, at least on the first go-round, to a proposal by Barbara Galazzo, a Nelsonville resident and nationally-recognized artist [See Cold Spring Artist Brings Mandalas of Light to D.C. Medical Center], to decorate the pedestrian railroad underpass on Main Street with mosaics. Galazzo plans to create the mosaics with the help of students and other interested participants, with assistance from businesses who could underwrite a portion of the artwork in return for having their names enshrined in it.
To give the film series an official seal of approval, the Village Board voted 4 to 0 to allow the mayor to sign a memorandum of agreement with the Film Society, providing insurance coverage through the village. Scheduled to air this summer: The Princess Bride, North by Northwest, and Indiana Jones and the Last Crusade. Dates are Sunday, June 26; Saturday, July 23; and Saturday, Aug. 27, at an hour determined by sunset.
“I like the selections,” Trustee Charles Hustis announced before he and Mayor Seth Gallagher and Trustees Bruce Campbell and Airinhos Serradas voted to endorse the film program. Film Society representative Stephanie Hawkins said the group would begin with a few movies this year but wants to expand the series in 2012. “We’ve gotten a lot of positive feedback from people to whom we’ve mentioned it,” she said.
Hawkins subsequently told Philipstown.info that, along with the village government, supporters so far include Jennifer Zwarich and John Wayland, providing the screen; the Depot Docs film series, which supplying a projector; Steve Ives and Don Kimmel, of Depot Docs and the Depot Theatre, respectively, who have lent technical expertise and related help; and the Hudson Highlands Land Trust, Shea Construction, and herself, offering financial assistance. Those interested in learning more about the Film Society can send a message to its e-mail address: [email protected] 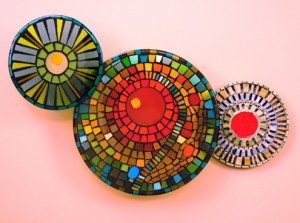 Mosaic-ization of the pedestrian underpass
In a written proposal, Galazzo, of Galazzo Glass, explained that in her underpass-enhancement project mosaic-makers would go to local merchants and collect colored bottles and similar materials, to be incorporated into the artwork. Some bottle pieces could be painted, with the design then fired into the glass. Students and parents would help affix the mosaics to the underpass walls. Depending on how the mosaics are put in place (either directly on the wall, or on a mesh mount).the project would take 3 to 10 months to complete, she stated. Businesses, institutions or individuals could become sponsors. For example, for $50 a donor could finance a day of “cabochon-making to be set into the mosaic,” while “$200 would sponsor a name tile for a business or historical site”; grants might provide funding as well, she said.
“One of the first impressions people get of Cold Spring is the train tunnel,” she told the Village Board in her proposal. “It has long been a place for improvement. It is my proposal to turn it into a beautiful, light-filled place with colorful mosaics.” She added that mosaics, unlike paintings, lend themselves to uses in such projects. Along with the artistic effects, the community would benefit economically, she predicted, since some mosaic-makers would be art students who would come to the village, staying in local lodging for a week at a time, “bringing in revenue to the town.”
The board seemed favorably inclined. “It kind of seems like this fit,” with public calls for aesthetic rehabilitation of the underpass and a similar suggestion in the village’s draft Comprehensive Plan, Mayor Gallagher said. “It’s going to take a bit more research and work, but I thought it would be good to put it on the table and get people’s thoughts.”
Dockside photo by L.S. Armstrong; Mosaic photo by Greg Staley