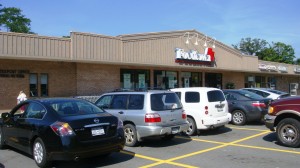 Cold Spring Mayor Seth Gallagher said last week the Foodtown Plaza owner has apparently dropped plans to convert a grassy Marion Avenue parcel to a parking lot as part of a reconfiguration of the grocery and post office. Meanwhile, he added, he is working with Foodtown to ensure the village does not lose the post office July 31, when the grocery could by right expand into the U.S. Postal Service space. He commented May 31 at the Village Board’s weekly workshop, at which the board also touched upon the recently completed Philipstown-wide fire and emergency services study. 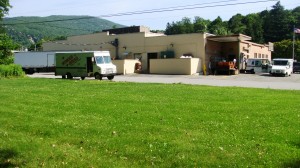 View from vacant parcel toward rear of Foodtown and post office

The village is involved in a project with the Town of Philipstown and Putnam County to create a proposed shared-government-services facility to be constructed on the old Butterfield Hospital property, owned by developer Paul Guillaro. Last week, the Village Board announced its desire to rent 2,000 square feet of such a center to house the police and justice court, now located at the village hall on Main Street. Philipstown is pursuing use of some 4,000 square feet and “the county is working on it also,” Gallagher said. “It’s definitely happening.” The concept “includes 3,000 square feet for a post office,” he said.
If the plans for the Marion Avenue parking lot are dropped, “we would have no involvement whatsoever with any zoning variances or any changes of zoning in the area?” asked Trustee Charles Hustis, a Foodtown employee. “Right,” the mayor replied. In discussions about the grocery expansion, Dan Katz, a Foodtown executive, has been accessible and understanding, Gallagher told Hustis and the other two trustees present, Bruce Campbell and Airinhos Serradas. “What he said to me was that he wants to keep the post office in Cold Spring; end of story. No matter where it is, it needs to stay in Cold Spring, and he understands that. And that says something.” He said Katz also has been conferring with the U.S. Postal Service and Serroukas. 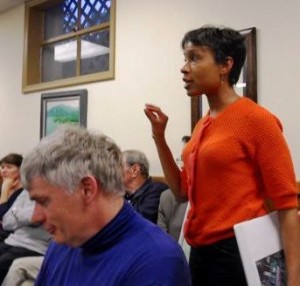 Marion Avenue resident Janice Hogan wondered when Serroukas would come before the Village Board to explain his plans. For some two years, his project has been pending before the Planning Board. “I don’t foresee he would come to the Village Board at any point,” Gallagher answered. Through the Planning Board and Zoning Board of Appeals, the village then needs “to say that there’s got to be some development there that’s good for all of us,” Hogan said. She pledged that the residents “are going to continue to follow it through.  As we all know, nothing has happened in two years” to address their concerns.

Before the meeting ended, the board briefly broached issues related to the fire protection study. Gallagher proposed sending a brief follow-up message to Cold Spring Fire Company Number 1 (CSFC), which the board had already invited to a June 16 meeting, to begin a conversation about some of the topics covered in the study. The five-line follow-up message — which the board ultimately deemed unnecessary — would have informed the fire company that Ron Graner of RFG Fire Rescue Consulting, author of the study, would not be present June 16 but that the Village Board wanted to get together with firefighters anyway.
“I don’t see what good can come of this,” Trustee Serradas told the mayor. “The fire company has hired an attorney. They’re going to address this through their attorney. You’re pushing an issue that I don’t think is going to benefit the community. I think it’s a mistake to pursue and continue to attack the volunteers. They have voiced their opinion. They’re waiting for their attorney.” Serradas also said that Gallagher wanted the board “to make a judgment” based merely on the Graner study.
“We’re not going to make a judgment. We’re not attacking them at all,” Gallagher said of the fire company. He said the meeting on the 16th would provide a chance to review the report “and start an initial discussion on it” with the firefighters. “We haven’t actually received anything in writing from them,” about the invitation to meet, he added.
Asked about the statement that the fire company has hired its own attorney in regard to the fire study, CSFC President Michael Bowman told Philipstown.info that “the Cold Spring Fire Company, like most companies and not-for-profits, has a ‘company attorney’ on hand.  We always have.  We have not discussed any matters relating to the RFG report with counsel, nor have we expended any money discussing that matter.”

One thought on “Mayor Reports Controversial Parking Lot ‘Off the Table’”