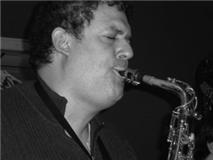 Original compositions and lesser-known modern jazz pieces by well-known composers will constitute selections by the Rob Scheps Core-tet at The Chapel Restoration on Sunday, June 26.  In addition to saxophonist and flutist Rob Scheps, the Core-tet is comprised of Cameron Brown, bass, Greg Gisbert, trumpet and flugelhorn, Anthony Pinciotti, drums, and Jamie Reynolds, piano.
Rob Scheps began tenor sax at age nine and went on to receive a Bachelor of Music in Jazz Studies with honors in performance from New England Conservatory in 1986. While living in the Boston area he led his own groups, most notably the True Colors Big Band. When he moved to New York two years later, he formed the Rob Scheps Core-tet. A faculty member of Mannes College of Music, Mr. Scheps has participated in workshops at colleges and universities throughout the country.
Bassist Cameron Brown began his career in the mid 60’s, recording in Europe with George Russell and Don Cherry. He went on to anchor ensembles under bandleaders Sheila Jordan, Roswell Rudd and Archie Shepp, and worked with master drummers Philly Joe Jones, Eddie Moore and Idris Muhammad, among others. He has played with Art Blakey’s Jazz Messengers, and the Sextet and Big Bands of George Russell, and performed or recorded with Donald Byrd, Booker Ervin, Lee Konitz and Chet Baker. He has also worked with young people all over the world, nurturing a passion for jazz, and is on the faculty of New School University. He currently performs with Sheila Jordan and with ensembles led by Joe Lovano and Jason Rigby, and leads two of his own: Cameron Brown and the Hear and Now and Cameron Brown and Dannie’s Calypso.
Pianist Jamie Reynolds performs in New York City with leading musicians such as Bob Mover, Chris Potter and Rob Scheps, and in venues such as Jazz Standard, Birdland, the Blue Note, Cornelia Street Cafe, Jalopy Theatre and 55 Bar. He has also played throughout the United States, Canada, the Caribbean, and in Norway, where he recorded at Rainbow Studios with the Rob Scheps Core-tet. Mr. Reynolds currently works with such groups as Out To Lunch, Tara Davidson Quartet and Wendy Gilles Band, and occasionally leads his own groups. He has been an artist in residence at the Hambidge Center in northern Georgia and is on the faculty of Manhattan’s 92nd St. Y.
Drummer Anthony Pinciotti performs and tours with notable musicians, including James Moody, Dr. Lonnie Smith, Joe Lovano, Mose Allison and Lew Tabackin. He began playing at age two and at thirteen was playing professionally throughout the Midwest, working with Motown and jazz greats, including trumpeter Marcus Belgrave. Multi-instrumentalist Ira Sullivan discovered him in 1992, and he moved to Miami to be his drummer. He went on to Chicago, where he played with local greats, led several groups composed of members of AACM and Art Ensemble of Chicago, and backed jazz masters touring through. Realizing the healing power of music and drumming, he began healing drum sessions with people of all ages.
Greg Gisbert, who plays trumpet and flugelhorn, has performed and recorded with big bands, including Buddy Rich, Woody Herman, Jimmy Heath, Roy Hargrove, Mingus Band and Wynton Marsalis’ Jazz at Lincoln Center Orchestra, where he played lead trumpet. He studied at Berklee College of Music and went on the road with Buddy Rich as featured jazz soloist. He has toured in Europe and Japan, taught numerous clinics around the world, and has been on the jazz faculty of University of Miami, Florida.
The concert will take place at 4 p.m. and is free with contributions welcome. Free parking is available on weekends at the adjacent Metro-North Station. The series is made possible, in part, with state and county public funds from the Artslink program, which in Putnam County is administered by the Putnam Arts Council.
Photo courtesy of  The Chapel Restoration