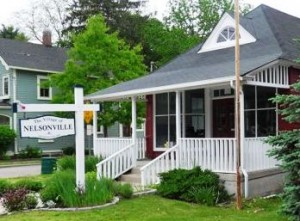 The Nelsonville Board of Trustees breezed through a 25-minute regular monthly meeting on Monday, June 20, addressing several environmental concerns along the way.  Trustee Ande Merante expressed apprehension over the rising number of deer appearing on village streets, particularly on Division, Pine and Pearl Streets. “They are walking around like they are residents,” quipped Merante. “There’s nothing we can do about it. I just want to alert people not to approach them and to not feed them,” he said.  Merante suggested feeding deer was illegal although he acknowledged he wasn’t sure. In fact, it is against state law to feed deer and moose according to the New York Department of Environmental Conservation website: Penalties can include a fine up to $250 and 15 days in jail for every day of the offense. Repeat offenders risk losing hunting and fishing privileges for up to five years.
Mayor Tom Corless noted that the New York City Department of Environmental Protection (DEP) has issued a draft report on planned work on the city’s water system infrastructure, which will likely include the section of aqueduct running through Nelsonville. Corless said he intended to review the report and hoped to get the DEP to examine the aqueduct section near Healy Road to determine if it is leaking and adding to the water damage problems there. Corless also said two old trees on Healy Road required cutting down due to falling limbs and general deterioration.
Merante and Corless (Peter Tomann was absent) voted to approve a resolution authorizing a traffic stop sign at Bank and Division Streets. They also voted to approve the re-appointment of resident Sue Brannagan to a five-year term to the Village Planning Board.
Corless also mentioned that the Open Space Institute would soon be conducting its annual conservation easement monitoring to ensure no encroachments had occurred on the organization’s properties in the village.