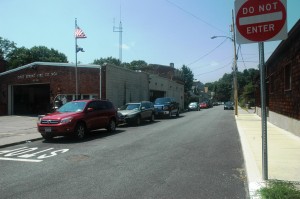 Speeding is an ongoing concern

Walking the block with about a dozen residents Tuesday (June 21), Cold Spring Mayor Seth Gallagher promised action to reduce speeding and other traffic problems on Church Street — an ongoing concern. On a muggy evening, Gallagher and Ronald J. Gainer, a consulting water and traffic engineer for the village, outlined various speed reduction and safety-enhancement measures. Bounded by Main Street on the south and Northern Avenue on the north, the approximately 26-foot-wide street ends in what a novelist- resident dubbed the “murder” and “suicide” intersections. Home-owners approached the Cold Spring Village Board — the mayor and trustees — last summer, appealing for help in dealing with the dangerous situation.
“We tried mixed stop-gap things, like ‘children playing’ signs” but hazards continue, Gallagher said, agreeing with the Church Streeters, many of them his neighbors, about the need for stronger measures. He lives on Garden Street, around the corner from Church Street, and thus has seen the problems as a parent and home-owner as well as a village official. Church Street widens at both ends, in vaguely funnel-like shapes, allowing vehicles to surge around the corner from Northern Avenue onto a less-expansive roadway restricted further by parking on both sides. 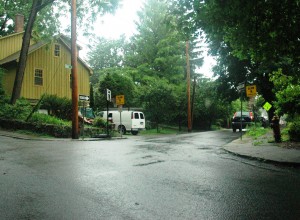 “I think everybody basically understands the issues at hand,” Gainer said, standing at the corner of Northern and Church. Cars at “ridiculous speeds” veer around the corner, he pointed out, as he distributed a six-page memo that detailed the problems and potential solutions. The latter include more signage, such as  “stop” and “pedestrians-present” signs;  speed humps — raised stretches of surfacing 10 to 14 feet long,  crosswalks, and “neck-downs” or “bump outs” and “chokers” — curbed, rounded aprons that extend out from the original sidewalk and curb in semi-circles to nip-in the width of the street. When placed part way up a block, a “bump-out” or “neck-down” becomes a “choker.” All three act “to bring the curbing out, narrowing the street,” Gainer told the residents. “So it doesn’t just seem you can shoot down the street” and so “you can no longer come up and swoop around the corner,” the mayor added. At the corner, “if people have to make a 90-degree turn, that’ll make a big difference,” resident Marnie Hillsley said.
The group subsequently proceeded to the intersection of Main and Church Streets. There, residents described the problems created by the wide-angled intersection and legally-dubious parking on Main Street, where, they said, cars remain all day, occupying spaces regardless of parking limits. The parked vehicles, especially large ones such as pick-up trucks and SUVs, make it extremely difficult for drivers coming south on Church Street to see whether it is safe to turn onto Main Street, they said. Church Street runs one-way south, making it impossible for residents to avoid the intersection when driving from their homes. Pedestrians headed south and trying to cross Main Street also face challenges. Whether driving or on foot, “the real problem here is you can’t see,” musician Tink Lloyd informed Gainer and Gallagher.
“Suicide corner: That’s what I call it,” announced Jessie Hunter, a novelist who writes psychological thrillers. As for the intersection at Northern Avenue, “that’s the murder corner,” she said. The mayor suggested further limits to on-street parking on Main Street and, to help pedestrians, painting a crosswalk on Main Street. According to a couple of residents, the perils increased when Church Street became one-way, several years ago. However, the mayor warned against a return to two-way access. “It would be a nightmare today, I think,” he replied. 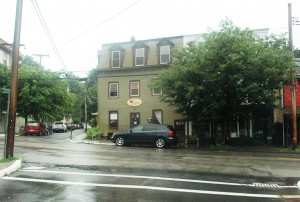 Continuing the tour, the residents expressed fond feelings for their street. “Other than the bad corners, it’s the best street in Cold Spring,” Lloyd declared. “It’s wonderful.” They also began envisioning beautification of bump-outs and chokers. “Can we put trees in the bump-outs?” someone called out.
“Definitely!” the mayor replied.  Before anything happens, though, he and Gainer cautioned that they must confer with the village highway department, to ensure that whatever is done does not adversely affect street drainage and department operations. Gallagher pledged that such follow-up would proceed expeditiously. “We’ll try to come up with a plan within the next few weeks,” he said.
Photos by L.S. Armstrong