Garrison artist’s Green in Vietnam show is now on exhibit 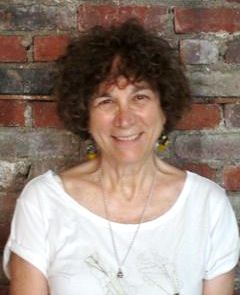 Sheilah Rechtschaffer (Photo by A. Rooney)

For painter Sheilah Rechtschaffer, mere beauty isn’t enough. A spectacular vista or idyllic setting may catch her eye, but it won’t, on its own, trigger her need to translate it into an artwork. For Rechtschaffer, the impetus to paint is contextual: a landscape, lovely as it might be, must evoke more than just that loveliness; it must be purposeful — have a story attached to it that she feels must be told through her brushes and pastels.

For example, many ponds abound in the Hudson Highlands – perfect subjects for a painter. Of these ponds, something is happening in the ones that Rechtschaffer has captured. What is happening may not be immediately visible to the viewer of the artwork, which looks at first glace like a tranquil landscape; but Rechtschaffer’s explanation (this one found on her website) makes her inspiration clear:

Lily Choke Series is a continuation of water and sky images at typical ponds of the Hudson Valley. Water lily pads surround Bryant Pond. They are very beautiful on the surface, but they choke up the shoreline and ever increase in their size around the lake. This atmosphere creates an emotional tension between the real and the feeling of enclosure. I am attracted to their beauty and I am also attracted to the notion that what is beautiful hides many things both in reality and in our hearts and minds.

Rechtschaffer says that “I can’t just paint a picture — as an artist, for me it has to connect with something else. If it’s about a pond, it’s a pond that’s being threatened.”

This duality is very much present in her latest collection, comprised of oils, pastels and watercolors, entitled Green in Vietnam, which is on exhibit at Peekskill’s Bean Runner Cafí© through July 24. The images can be taken in at a surface level as serene abstractions of the very green landscapes of rice fields and tropical river deltas, those very timeless representations of the Southeast Asian topography.

However, as with all of Rechtschaffer’s work, there is a lot more going on, behind these ‘scenes.’ Beyond the pictorial, she is interested in “tapping into the shared histories of the U.S. and Vietnam; the war, the healing in its aftermath and the beauty and resilience of the land and its people.”

None of the work was actually undertaken in Vietnam. During multiple trips to the country, Rechtschaffer brought along sketchpads, watercolors and journals, but did not encumber herself with the full regalia of oils and canvases. She and her husband, Bert, a retired dentist (and still-going strong jazz pianist) were in Vietnam for a different purpose. 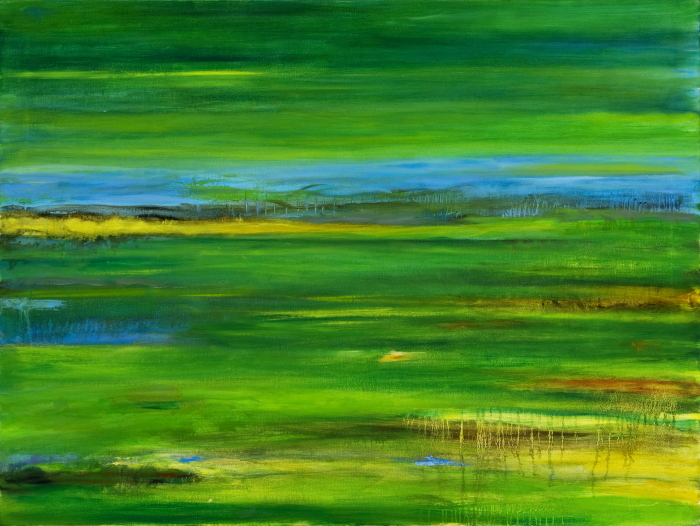 After retiring from his practice, but not feeling ready to stop, Dr. Rechtschaffer began doing volunteer dental work in St. Lucia and Brazil and both Rechtschaffers were invited to ply their respective trades on board cruise ships. One of these cruises journeyed from Yokohama to Ho Chi Minh City.

Immediately taken with the country, they traveled around and then resolved to find an N.G.O. (non-governmental organization) to which they could offer their services. They found exactly this in the East Meets West Foundation (eastmeetswest.org), and began providing volunteer dental surgery and art projects, working with the local population. “We were immediately embraced by these incredible people,” reminisces Rechtschaffer.

Six return trips followed. One of the projects involved creating a large mural on a balcony in Hue, with young children.

Wanting to produce art about Vietnam, green was the first impulse. Rechtschaffer explains, “I started working on the paintings when I got home, and thought of green. Green equals regeneration, regrowth. After they kicked us [the U.S.] out in ’75, they changed their country, and I was struck as to how little malice towards us there is — because they are Buddhists. I got the idea of green as a symbol. Riding to work at the clinic in rural areas near Danang I’d see the most incredible shades of green in the landscape. Green was everywhere and endless.

“It was a color-oriented tradition for the Abstract Expressionists and the Impressionists to depict a place in time and light, but the moment underneath this for me is the politics behind it — all the things important to you come together. When you’re a volunteer at an N.G.O. you don’t go as a tourist but as a traveler. For us, the Vietnam experience is so intertwined with everything in America. It’s still very much in our body politic. It’s distracting now, because it’s a tourist destination, but there’s still much more to it than that.” 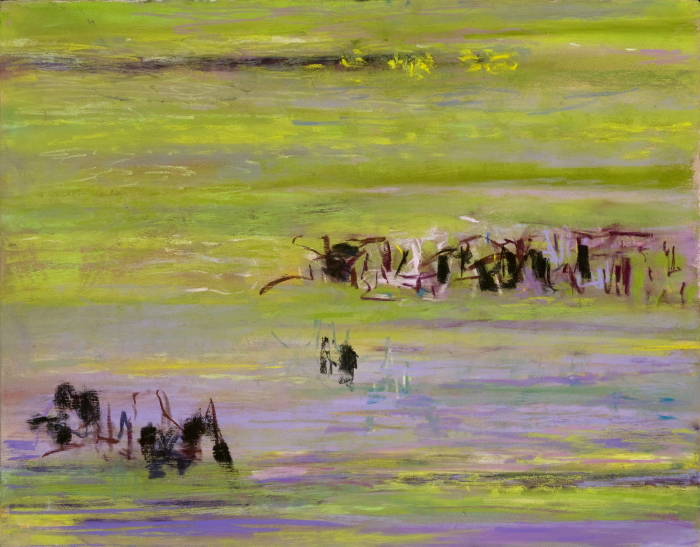 Rechtschaffer describes the process of these works as “beginning with oxide colors—deep reds, ochre, black and browns of bloodshed and scorched earth painted very lightly — and then adding layers of greens, representing the regeneration, rebirthing and recovery.” Some of the paintings incorporate what appear to be calligraphic marks. This, according to Rechtschaffer, is a play on the written Vietnamese language, which appears to resemble Roman lettering, but instead is a five-tone language, with up and down inflections.

“It’s a language you think you know, but you don’t,” she says. “It seems recognizable yet it doesn’t really resemble that reality. Plus, how many horizon lines can you make? You get bored!”

The greenery of the rice fields belies some of the danger they are in, as Rechtschaffer points out, “There are three plantings of rice a year; it is a very bountiful agricultural environment, and it allows them to feed their country. But because of global warming, the ocean is rising. If the Mekong Delta, the rice basket for the region rises just 36 inches, it will submerge the land and would be catastrophic. Luckily there is a lot of ecological research being done on this issue now.” (There’s a theme here: if it’s about a Delta, it’s about a Delta being threatened”).

Rechtschaffer received a B.S. from Boston University, and a B.F.A. from SUNY Purchase, pursuing Post Graduate Studies at the School of Visual Arts and the Center for Restoration and Preservation in Venice, among others. For years her primary interest was in fresco painting, and she was president, co-director, founder and instructor (with Livia Monaco) of Accademia Caerite, Inc. in Ceri, Italy. Accademia Caerite, Inc., a not-for-profit workshop dedicated to continuing the traditional techniques of fresco painting and scagliola. She has taught fresco painting at the New York Academy of Art and, for 15 years, at Parsons School of Design. 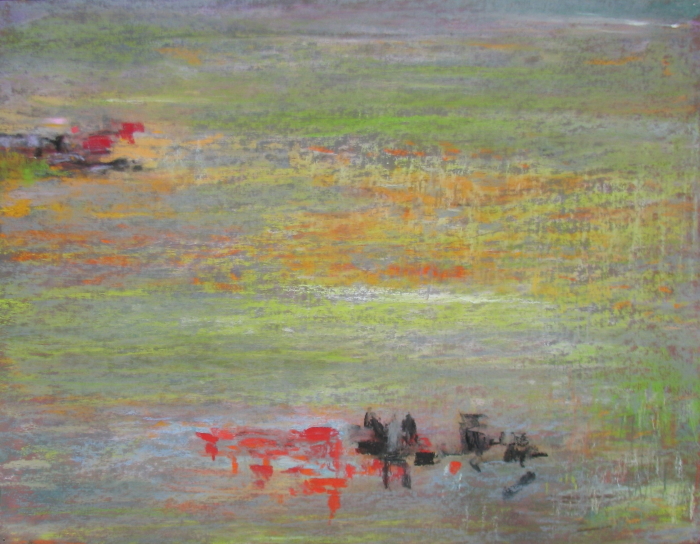 Rechtschaffer’s numerous solo exhibitions include a 2006 Pastels show at the (now closed) Van Brunt Gallery in Beacon. She has both curated and exhibited in many group shows over a span of decades, and has contributed pieces to the Collaborative Concepts shows at Saunders Farm and to Artists on Location at the Garrison Art Center for many years. Last year she contributed a camouflage shed covering, with the notation that “the real camouflage isn’t what you see. The enemy isn’t so easily identified,” for Simon Draper’s Habitat for Artists project in Garrison.

Artist’s Statement for Green in Vietnam

To remember Vietnam, remember green.
Green is everywhere and endless.
Each rice plant in water adds to its reflection.
Peace is a fragile moment.
Vietnam is at peace.
And our attentions are elsewhere.

The Rechtschaffers moved to Garrison in 2000, after dividing their time between Croton and Manhattan for many years prior. The move to Garrison was made because, “I knew people, I knew the Art Center. We just wanted to be in a beautiful spot. Luckily we found a house here with a shed that I was able to convert into a studio. We feel lucky to be living here.”

Green in Vietnam continues at the Bean Runner Cafí©’s BRC Gallery until July 24. Rechtschaffer will be giving an Artist’s Talk about the exhibition on Tuesday, July 5 at 6 p.m. The Cafí© is located at 201 S. Division Street in Peekskill and opening hours are 8 a.m. to 6 p.m. Check beanrunnercafe.com for more information, or phone 914-737-1791. Visit sheilahrechtschaffer.com to view more images and learn about past projects and more of the motivation behind them.

2 thoughts on “What is Beautiful Hides Many Things: Sheilah Rechtschaffer”