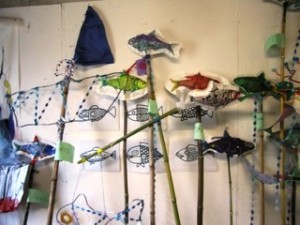 Realm of the Hudson conjured up at Garrison Art Center

Fishes, boats, birds, butterflies, all are readily found in our river eco-system, and all will be celebrated in a created-by-many-hands float representing the Hudson, to set sail (on land) down Cold Spring’s Main Street in the Community Day Parade, on July 3, 2011. For the past two weekends, the Garrison Art Center has hosted free FLOAT workshops, inviting Philipstown kids to participate in this first-time event.  Teaching artists and parent helpers helped kids glue, cut out and embellish a host of creatures and features native to this region, from sturgeon to mountains.  An actual float (a dressed-up trailer) will head up the Art Center flotilla, with Garrison School art teacher Coulter Young aboard, dressed in Hudson River School painter’s garb, painting as he rides, capturing the convoy of Hudson denizens who will accompany him, “swimming” alongside. The goal is to convey a walking three-dimensional representation of the Hudson River view, the very view which has inspired artists for centuries. 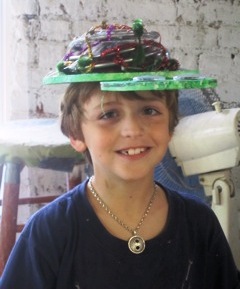 The kids weren’t talking Hudson School of Art painting history though, as they bent and folded and painted their contributions.  A boy named Mason was putting the finishing touches on his nifty turtle hat, which he described as being made out of “wire, foam, pipe cleaners, little bits of metal, googly eyes, shiny green paint and glue.”   Other kids were inside one of the Art Center studios and at work at tables set up outside as well. A ribbon of blue fabric representing the Hudson rustled in the breeze on Garrison’s Landing.  Big artistic decisions were mulled over: “Two eyes, absolutely. Or — if he’s a flounder or a fluke his eyes would be on the same side.”
Painter and Garrison Art Center Board Member Thomas Huber was one of the artists helping the kids.  He called Village of Cold Spring Mayor Seth Gallagher “very excited to have artists involved in the parade this year. We’re happy to finally create something for the parade.  It’s exciting to make something creative — to show people what the Art Center does and to try to make it inviting for the whole community.”  Workshop participants were invited to bring their own materials or use the many different “ingredients” provided by the Art Center. 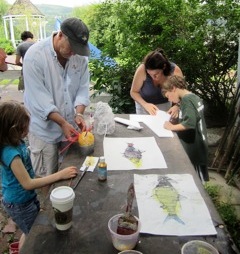 Fish are the order of the day

Newly-appointed Art Center Board Member and Chair of this Event, Nina Carlson, a former education director at the Aldrich Contemporary Art Museum in Ridgefield, CT, explained, “we didn’t just want to march; we wanted to get the community engaged. We started out with the image of fish.  We made fish prints a few weeks ago, and now people have just run with it.  We are trying to keep the fish native.  It’s interesting because people come in and claim that they’re not creative, but then they make these splendid things.”
View the Art Center float in the parade, which departs at 2 p.m. on July 3 from the top of Main St.  The Art Center will also offer hands-on activities at the Dockside property while the music and food are flowing, following the parade. Visit Philipstown.info for a complete listing of Community Day events, later this week.
Photos by A. Rooney