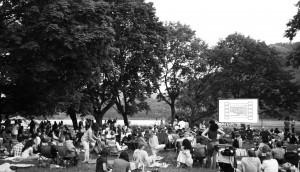 The crowd gathers before the show

It may not have been Cannes or the Academy Awards, but the Cold Spring Film Society’s inaugural screening of The Princess Bride can be judged a great success. At 7:30 p.m. there were perhaps 30-40 people picnicking in front of the screen. By 9 p.m. the sky had darkened and Film Society co-founder Stephanie Hawkins announced that “there were almost 600 people” who had come to see the film. There appeared to be some “technical difficulties” that prevented the promised cartoons and shorts, but the feature presentation was crystal clear and audible to all. An informal survey by Cold Spring Mayor Seth Gallagher indicated that the bulk of attendees came from Cold Spring, followed by Nelsonville, Philipstown-at-large and even a smattering from points farther away. Based upon this successful event, one can easily imagine an even larger audience for the screening of North By Northwest, which will be the second of three planed films for the summer series. It will be shown Saturday, July 23; rain date Sunday, July 24.
Photo courtesy of Jen Zwarich

6 thoughts on “The Princess Bride Draws Large Crowd to Dockside”