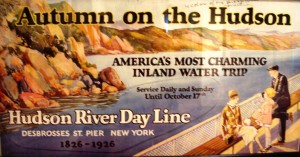 Choosing from an array of Philipstown-related artworks and artifacts spanning centuries can’t have been an easy task for Trudie Grace, curator of the Putnam County Historical Society’s (PCHS) newest exhibit, which opened this past Saturday, June 25 with a reception for members.  The choices made give a window into aspects of geography, commerce, transportation and society in this locale from the 19th century to the present.  Culled from the Society’s collection, which originated with its founding in 1906, the objects were crafted and derived from multiple mediums, including sculpture, oil painting, etching, lithography, wood engraving and the far more contemporary ink jet printing process. Indeed, the full title of the exhibit is: Philipstown Potpourri: Fine Art, Photographs, and Favorite Artifacts from the Collection. The work includes “pieces from the permanent collection which have not been on view for several years, as well as recent acquisitions” according to exhibition literature. 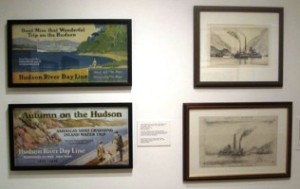 Travel Posters from the 20s next to studies of steamboats

New acquisitions, displayed for the first time, include an 1862 hand-colored lithograph, The Hudson from West Point, by Fannie Palmer, a well-known mid-nineteenth century lithographer, published by Currier & Ives, and Hudson River Steamboats, a 1932 etching by Reynolds Beal, shown with Beal’s preparatory pencil drawing. The exhibit’s description of the works noted that these “maritime scenes were inspired by his studies of engineering of marine vessels at Cornell.”  Colorful posters from the 1920s are hung adjacent to the works by Beal, one depicting the Hudson River Day Line.  Tourism to the Hudson Highlands was very much in vogue back then, as “travel on the Hudson was extensively advertised,” according to the explanatory notes. 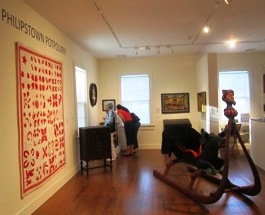 The exhibit begins in the front room of the museum

Also on view, to single out just a few, are a chromolithograph of West Point, done in the 1880s or ’90s by Andrew Melrose; a wood engraving, later hand-colored, of Storm King by A. Meason; an engraving, by N. Orr and Co., entitled “A View on the Hudson,” a watercolor by Emil Holzhauer, an American scene painter, showing a “View of Etta Houseboat” (1935); and a recently acquired ink jet  print of Bannerman’s Castle, by local photographer Jan Thacher. Drawing the eye to their vivid story-telling are the side by side works entitled “Rescue of William King by the Family Dog.”  An explanatory note says that “For at least 15 years this print hung above the doorway of the PCHS’s schoolroom gallery, next to the adjacent painting by an amateur painter.  William King became a trustee of Cold Spring in 1898.”

Making return appearances are popular objects such as a cast-iron bench made at the West Point Foundry after a design by Washington Irving; the circa-1850 card table that legend says railroad magnate Samuel Sloan played cards at in 1862 while awaiting the arrival of President Lincoln in Garrison; and, dramatically placed at the entrance to the exhibit, the 19th-century sleigh, in the form of a wild boar, given to General and Mrs. Daniel Butterfield by the Russian government. A description of the sleigh, presented to the Butterfields in 1893, calls it “a type used to go the opera.  It would have been pulled by a troika: 3 horses.”  The wall behind the sleigh is graced with a 1904 quilt, a “Ladies and Society Fundraising project” by the Ladies Aid Society of the North Highlands Methodist Church.  Nearby, a vintage 1926 A.C. Tube Electric Lyric Radio provides musical accompaniment.

A secondary exhibition, Stereoviews and Photographs from the Collections of Mark Forlow and Joe Diebboll, the inaugural presentation of the new “Collector’s Corner,” occupies most of the middle room in the galleries.  Collector’s Corner is designed to feature significant materials from local private collections; exhibits will change periodically. 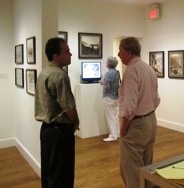 Joe Diebboll (l) talks to Joe Chapman about the exhibit

Stereoview is a technique presenting two offset images separately to the left and right eye of the viewer. Both of these two-dimensional offset images are then combined in the brain to give the perception of three-dimensional depth. These images have been enlarged and digitally “cleaned” and framed. Joe Diebboll, who runs the fine art printmaking Highland Studio was present at the opening and explained, “Stereoviews began in the mid-1800s and became very popular in the 1870s and ’80s, as they allowed people to see places which were not easy to get to and allowed them to see them in 3-D. This included many places in our area. The railroad was new, and it came through here.  Most were done by a publisher in New York City, E. & H.T. Anthony.  There was a camera designed with two lenses the width of the distance between eyes.  The exposures happened simultaneously, combining two different perspectives.  3-D has come and gone in and out of fashion.  As a printmaker, I was attracted to these.”  Diebboll called Forlow’s collection “full of rarities” and said there was a growing collectors’ market for stereoviews.

Two versions of Rescue of William King by the Family Dog

The many images on display include very familiar sites, shown in their 19th-century state, among them Indian Brook Falls, views north from Cold Spring to Storm King, Main Street, Bull Hill, the Cold Spring Methodist Church, the Cold Spring depot, with St. Mary-in-the-Highlands behind, the Chapel of Our Lady part way through its Victorian reconstruction, the West Point Ferry at Garrison’s Landing and timeless scenes of a man crabbing.  Some of the images are for sale, with proceeds designated, in part, to benefit the PCHS.

Philipstown Potpourri runs through December 11, 2011. The Foundry School Museum is open Wednesday to Sunday, 11 a.m. to 5 p.m.  Admission is free.  The museum is located at 63 Chestnut Street.  More information is available at 845-265-4010 or www.pchs-fsm.org/