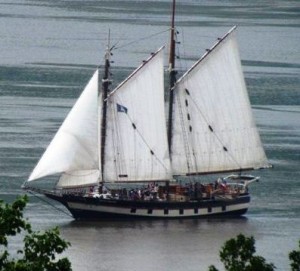 “These kids have had the Hudson right in their own backyard for their whole life, but have only seen it from the river bank. For some this may be a once in a lifetime experience.”  That’s how Mark Wick, a 6th grade teacher at Haldane, described the excursion his class took on June 17 aboard the Mystic Whaler, a beautiful, 83-foot schooner that has been a frequent visitor to this part of the Hudson River in recent months. There is no doubt that the three-hour cruise south from the Cold Spring dock past West Point and Garrison was just plain fun, but it was also very much a learning experience for the 35 students who were there as part of an environmental science program and a study of the Hudson River. 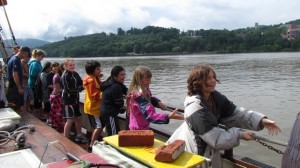 The Mystic Whaler provided a real-world marine teaching lab as small groups of students worked their way through several onboard learning stations that focused on river-related subjects such as navigation, wildlife, water chemistry, history and environmental action. Teaching is done by the Whaler’s education staff and volunteers. In the background the Whaler’s crew provides a constant, working lesson in sailing.
Becky Rowland, a 33-year-old native of Okemos, MI is the Whaler’s head educator. She’s been sailing since high school. “I went on a program similar to this in Michigan called ‘Inland Seas.’ It was a three-day trip. The day after graduating from high school I signed on as a cook and I haven’t looked back since.” Rowland has also sailed in the Caribbean Sea and Puget Sound. She studied Environmental Science at Washington State University and plans on attending Antioch College in New Hampshire this fall.
Rowland’s teaching mate, 27-year-old Maija Niemisto, hails from Northfield, MN. and speaks passionately about her work on the Mystic Whaler. “The ‘internal community’ onboard is a big aspect of this. People want to be here. It’s physically demanding, emotionally demanding and intellectually demanding. It’s great to work for a good cause. You sleep well at night.” She had kind words for Cold Spring. “We’re really grateful to be able to serve Cold Spring now. Everybody loves stopping here.” Niemisto holds a degree in Environmental Studies and plans to pursue post-graduate studies in Marine Science and Estuary Studies. 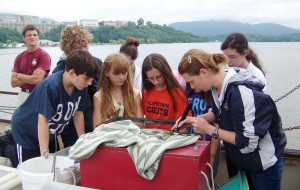 Students look for eels in water sample taken from the river

The Hudson River means many things to many people so it came as no surprise that when six of the students were asked what they liked best about their Mystic Whaler experience no two had the same answer.

Alzy Cinquanta: “I liked the navigation part — all the charts and how they use them, using landmarks and buoys to figure out where you are — and the compass that the captain uses.”

Raquel Escoto: “It was fun singing songs about the ocean, the river and the fish.”

Teresa Figueiras: “I liked sailing the most, just seeing nature.”

Nicolas Sterling: “I found it interesting how organized the ship is — how every space is utilized — like the bilge and all those little storage spaces below deck.”

Samantha Phillips: “I’m into animals. I liked the eel!”

Mary Margaret Dwyer: “I liked being below deck; it was really cool. I like spots that are kind of secret.”

The lure of the Mystic Whaler struck a chord with 54-year-old Linda Leith of New York City as well. The Haldane cruise was part of her fourth, one-week stint as a volunteer teacher. “I love to sail and it’s fun to teach kids things they don’t know about. I’ve learned a lot too — I had no idea there are so many different fish in the Hudson River!” Leith and the students had just learned that there are some 218 species of fish in the Hudson. The other 6th grade Haldane teacher onboard was Kim McCollum and she was no less impressed with the experience. “I love this. I grew up on the Hudson in Garrison  — and we had a boat. I love this.” 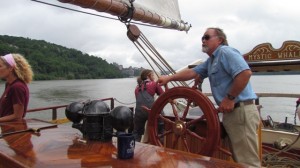 Owner and Captain John Egington at the helm

At the helm is Captain Egington
At the helm of Mystic Whaler was John Egington. He has been her captain for 29 years and her owner for the past 17 years. Egington’s love of the river and Mystic Whaler is evident in his face, his body language and his voice. “You need a breeze of about 7 to10 knots for sailing to be enjoyable. This has been a breezy spring,” Egington said as his eyes scanned the river.  “The greatest depth we’ve recorded on the Hudson is 207 feet.” The “silent sail,” one of the last activities of the day, seemed to flow directly from Egington’s appreciation of the river. For three minutes the students had to be completely quiet, using their senses to take in everything around them.  “They spend so much time looking down (at the onboard learning stations) we ask them to look up and around during ‘silent sail.’  No talking. Just sailing along quietly,” he said. When the bell sounded to mark the beginning of complete silence, it was the only time during the cruise that everyone onboard shared the identical focus. Captain, crew, teachers, students, volunteers and reporter: all were silent. And quiet it was with almost no breeze – – the slightest shift of a sail – – bird calls and a faint sound from the distant river bank. There was something close to disappointment in the air when “silent sail” ended.
Singing was an important part to of the cruise with Rowland and Niemisto acting as choir directors.  Students and adults joined in rousing versions of This Land is Your Land and other songs. Pete Seeger’s name came up often. As the Whaler returned to Cold Spring, the final chorus of “Habitat, habitat, have to have a habitat,” filled the air. 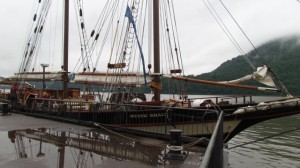 The Mystic Whaler was built in 1967 in Tarpon Springs, FL. Her sister ship, the sloop Clearwater, was built in 1969. Both are replicas of 19th- century cargo ships. From April through June Mystic Whaler joins Clearwater in conducting educational trips on the Hudson River. During the summer Mystic Whaler sails out of New London, CT offering day trips, lobster dinner cruises, and three- and five-day trips. It can accommodate 65 passengers on day sails and 34 for overnight trips. Niemisto said that when the Haldane cruise was done, Mystic Whaler would be sailing south to Croton-on-Hudson where it would meet up with the Clearwater at the annual Clearwater Great Hudson River Revival music festival. “The two of them don’t get to be together very often,” she said.
Photos by M. Turton

One thought on “Hudson River Becomes a Classroom”