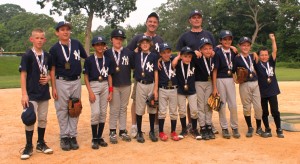 The first place Giants and second place Yankees played an exciting Championship game on June 21. The Yanks had previously beaten the Giants in 2 of 3 games during the season. The Yankees’ Kenney McElroy started the game with a walk, and was moved to 2nd by Kyle Kisslinger’s single. Joe Tock then drove them both in with a triple, scoring the Yankees’ third run when he stole home. The Giants answered in the bottom of the first with two runs, with a double from Justin Markey, a triple from Adam Hotaling and a single from Mario Cofini. The game then turned into a pitching duel with Joe Tock, winning his 6th game, striking out 12 in 5 1/3 innings, matched by Justin Markey striking out 12 in 4 innings. Kyle Kisslinger got his 6th save, striking out the two batters he faced. The Yankees scored their last run off Markey on a walk by Kisslinger, who then stole both 2nd & 3rd and was driven in by a single by Tock.
This year’s minors’ baseball season has been very competitive, with all five teams making it to the playoffs.  In the first round of the playoffs, the Mets upset the Phillies 9-1, backed by the pitching of David Higbee and the hitting of Steven Suits. The Mets then lost in the second round to the Giants 16-1. The Giants were led by the hitting of Justin Markey and Adam Hotaling . The Yankees beat the Cardinals 11-5 in an exciting game, led by the hitting and pitching of both Kyle Kisslinger and Joe Tock. The Card’s Alden Dobosz and Justin Roffman both had three hits in that game.
The Yankees Championship team also included Ronan Tyson, Alex DeMartine, Ellis Osterfeld, Xander Casparian, Matt Champlin, Ian Flanagan, Grady Holubar, Luke Flagler and Everett Campanile.