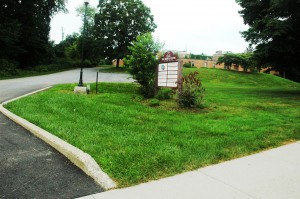 Trustees reluctant to make a decision at this time

The Cold Spring Village Board last week revisited the idea of constructing a new firehouse on a corner of the shuttered Butterfield Hospital property, with members expressing doubt about the feasibility of the project — estimated to cost $4 million and raise taxes 20 percent. As a busy workshop session wound down on June 28, the board opted to ask Paul Guillaro, of Butterfield Realty LLC, owner of the Butterfield site, whether Cold Spring can indefinitely defer a decision on the firehouse — a decision complicated by the Grove, the historic derelict house adjacent to Butterfield tract, as well as by worries about money.
After he bought the old hospital site in 2007, Guillaro offered to give the village a parcel below the Carolyn Lahey Pavilion, which houses the active Medical Center at Cold Spring. Two years ago, an architect for Cold Spring Fire Company Number 1 showed the Village Board designs for a new firehouse on the parcel, located along the Lahey driveway, off Route 9D. Now, Gallagher said, Guillaro is preparing drawings, to submit to the village Planning Board, for developing the Butterfield complex. If the firehouse fills space near the Lahey pavilion, the mayor explained, Guillaro wants part of the Grove grounds for parking for the medical complex and needs to show the parking configuration on his pending drawings. 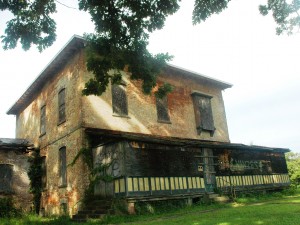 The village owns the Grove, ceded by a previous owner. Putting parking lots on its grounds “would restrict what you could do with that building,” a house built in 1853 as a residence and medical office for Dr. Frederick Lente, the physician for the West Point Foundry and a leader in 19th-century medicine in New York State. “If you’re going to be parking cars there, you can’t really turn it over to somebody as a residence” or similar use, he said. On a 2007 survey and in other venues, residents have suggested various possibilities for the Grove, such as restoring it as a single-family home or making it a bed-and-breakfast, restaurant, museum. or office. Trustee Airinhos Serradas predicted that putting parking there would mean demolishing Lente’s house.
Falloon disagreed. “It would just mean tying the Grove property together” with the Lahey Pavilion parking lot next door, Falloon said. He proposed that “maybe he [Guillaro] can leave that offer of his property open” without a deadline for a village decision. “If we don’t commit to having a firehouse up there, the Grove is left alone?” Trustee Charles Hustis asked.
“Yes, and we can then do what we want with it,” Gallagher answered.
“I wouldn’t hang the Grove on the fire department,” advised Falloon, a professional firefighter. He recalled that the park housing the Tiny Tots playground once had been considered a potential firehouse site. “I’d hate to see another piece of property taken completely off the table,” for a firehouse, he said. “You kind of always want to have a back-up plan for something that large. One of my concerns, or wish list, is to not make a decision that we will never, ever, consider this property” at Butterfield for a firehouse. 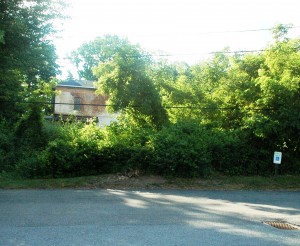 Gallagher replied that “for me the decision is a little bit easier when you think about what the cost is and who’s going to pay for it. You’re talking a minimal cost of probably $4 million. That would result in a tax increase for residents of about 20 percent for the period of the municipal bond” required to finance the venture. Even at $4 million, he added, “what you’ve built is a firehouse that’s smaller than the current one.”
Hustis mentioned other major projects on the village horizon. “We have to focus on the infrastructure right now,” he said, citing the $1.5 million Main Street pipe-rehabilitation effort pushed ahead by the board earlier that evening and a separate Main Street street-improvement project. “I don’t think we should make a decision tonight on this.”
Gallagher said that before investing in a new firehouse the village might buy a ladder truck, expensive, but far less costly than a $4 million building, and upgrade the current firehouse, which he described as “functional,” although “it certainly needs to be improved upon.”
An ex-chief of the Cold Spring Fire Company, Falloon pointed out that the firefighters like their Main Street location. “Their first preference is to be where they are.” He suggested that perhaps Guillaro can tentatively pencil-in a new firehouse at Butterfield without the village being compelled to make up its mind. “We can’t make a decision in the near-future about building a $4 million firehouse at either place,” Butterfield or Main Street.
“At some point, you have to commit to one or the other,” Gallagher cautioned. Furthermore, if the village keeps the Butterfield site in play long-term without resolution, “then we will never be able to decide what to do with the Grove. I think now it’s kind of the time where you can make a decision, either ‘yes,’ or ‘no,’ or ‘what are you going to do with the Grove?'”
To move things along, with no objections from the rest of the board, Gallagher and Falloon said they would consult Guillaro in hope of clarifying his position. The board then dispensed with a few routine matters before adjourning for the night.
Photos by L.S. Armstrong