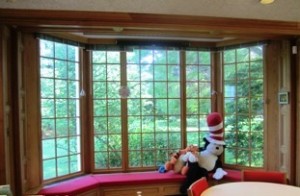 It’s easy to ooh and aah over aesthetic renovations, additions or upgrades, but some improvements are more covert and less apparent to the eye, yet even more essential. Such is the case with the just-finished three-year greater energy efficiency project at Desmond-Fish Library (DFL).

Funded in part (one quarter, to be exact) by a 2008 New York State Library Construction Grant — the Library raised the additional monies — the grant kick-started the project, giving it enough to get going. Library Director Carol Donick feels that in addition to the funding itself, part of the value of the grant is to “get libraries thinking about what could be done.”  A library committee spent a great deal of time researching, doing homework and putting bids out for services. With four projects in three years now completed, the library is already seeing significant savings in energy costs. The goal was to invest up front and each year spend less on utilities. 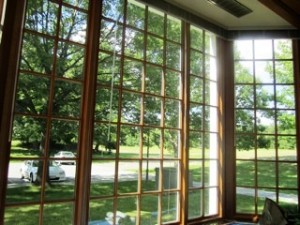 The first step taken was to improve the building’s insulation.  A committee studied what might work best and came up with cellulose, Donick calling it “low in chemicals and environmentally friendly. It comes from old newspapers, making it very appropriate for a library.”

The attic was filled with the new insulation, and right away the library stayed cooler in the summer and fall ’08 showed reductions in heating oil use. A door to the children’s room, with worn away sealing and other issues was replaced next.

Handily, the library was chosen as a New York State Energy and Research Development Authority (NYSERDA) “Star” organization, and thus was able to get NYSERDA’s recommendations on what to do. According to their website, NYSERDA and Energy Star work together to bring “¦ organization financial and technical assistance, tools, and information to help “¦ better manage energy, which can reduce operating costs and pollution.” The initial advice was to “seal the envelope” of doors, window, and insulation.

Last summer, changes were made to the lights.  Existing fluorescents using T12 bulbs were switched to T8s, which use less energy and, for some reason, according to Donick, are brighter than those used previously.  The library also replaced remaining incandescent bulbs with compact fluorescents. Some education was in order for patrons, especially those using the private rooms, unused to the new bulbs, and unaware that the bulbs take a while to come on.  Luckily in this phase it was simply the bulbs and ballasts which changed, and no new lighting fixtures needed to be purchased. 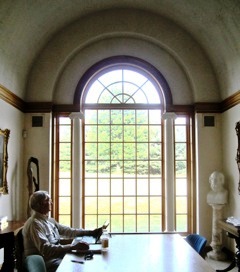 The last, and most dramatic project, took place this past May, when the three largest windows, the elegant Palladian ones falling in the direct line of vision when entering the library through the main doors, the large windows above the window seat in the Children’s Room, and a similar expanse in the “All-Purpose” room adjacent to the library’s offices, were replaced. All were deteriorating, but the maintenance of the traditional character of the building, modeled after Jefferson’s Monticello, was crucial. A lot of research was conducted to make certain that any replacements would, in fact, result in energy savings.

Glass manufactured by Peachtree Doors and Windows was selected for the replacements. The new windows are fabricated using double-panes space between them that is filled with an inert gas, rather than air to improve energy efficiency. The new installations have already resulted in fewer drafts, and have dramatically lowered energy costs.

Donick produced records of several previous years’ electric bills, and, in June 2007, before the program began, the library was billed for 7,500 kilowatt hours.  By June, 2010 the usage had decreased to 6,600 hours and this past June’s statement revealed a further drop, to 4,800 hours, a figure which may become even more dramatic in its decline during the hottest parts of the summer yet to come.

All of this was accomplished with no disruption to patrons and only minimal displacement of staff, with much of the work taking place on Tuesday and Thursday mornings, when the library is closed until 2 p.m. Discussions are ongoing regarding possible larger energy-saving projects, including the installation of a geo-thermal heating system and the use of solar panels.

Much of the work was done by local suppliers and businesses. The design, construction and restoration firm, Tiny Houses, installed the windows, working with Putnam Windows and Glass, who supplied the glass.  Tom Ptacek, of Thomas Jerome, Inc. installed the new door, and Pidala Electric did the lighting work.  Donick says that “We try to use local; we’re very grateful, we know that sometimes they give us a good price and we try to use them — it’s a good reciprocal relationship.”